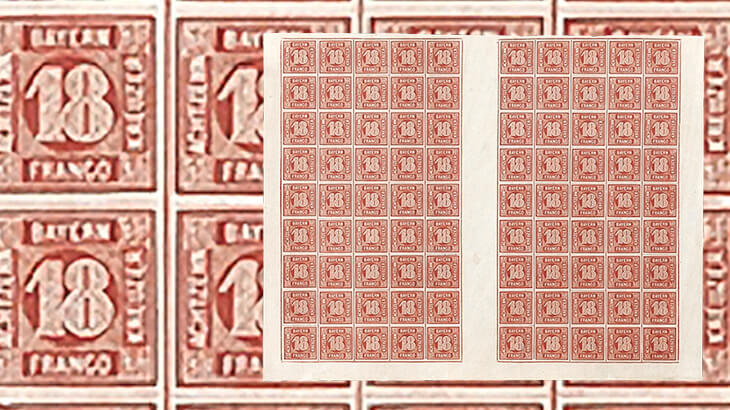 One of 13 full mint sheets of classic Bavaria stamps sold for about $1.68 million at auction Oct. 11-15 by Christoph Gaertner in Stuttgart, Germany. Several sheets in the lot are unique. 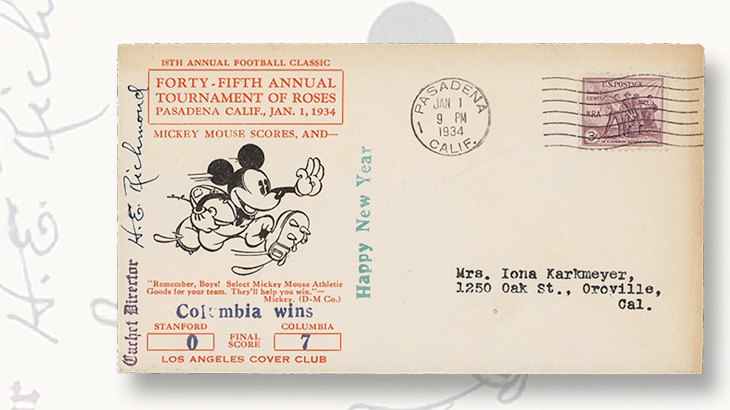 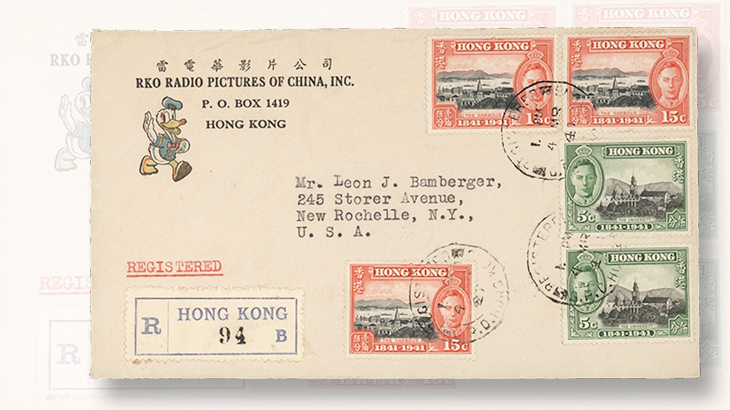 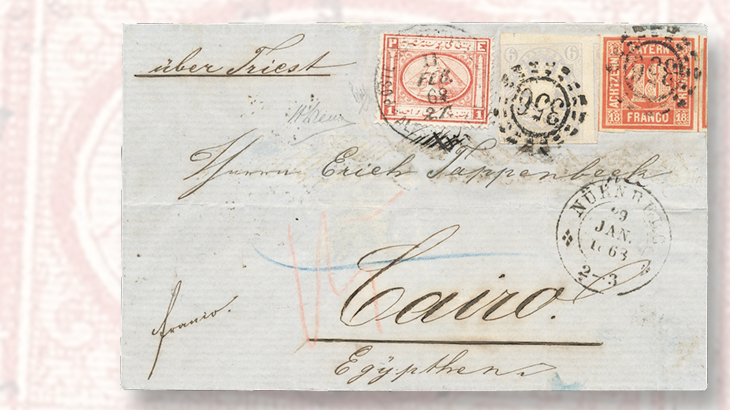 Mailed from Bavaria to Egypt in 1868, this cover franked with two Bavarian stamps and a single Egyptian stamp brought in a winning bid of $53,680 in the October Gaertner auction. 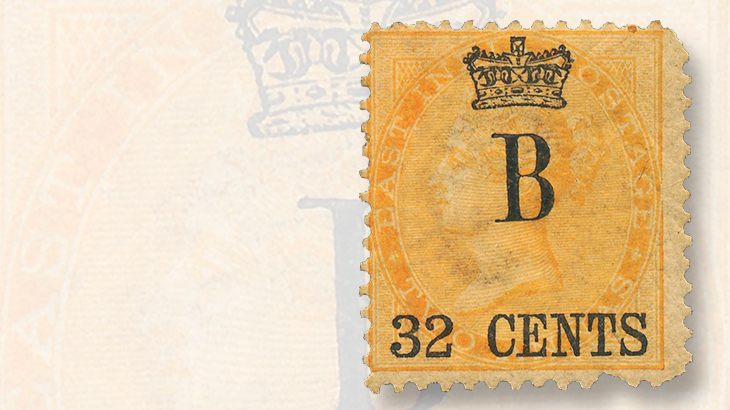 An unusued example of this rare 1885 surcharged stamp for Bangkok sold for $22,140 during the October Gaertner auction.
Previous
Next

Although just 10 years old, the firm of Christoph Gaertner, based near Stuttgart, Germany, has rapidly grown to become one of the world’s largest stamp auctioneers. The firm’s 35th philatelic sale, held from Oct. 11-15, offered some 29,000 lots of stamps, covers, postcards, ephemera, and other collectibles from 1,400 consignors. The sale was previewed in the Oct. 10 Linn’s Stamp News.

Bids came in from 3,800 bidders, and realizations, including the firm’s 22 percent buyer’s premium, totaled about €9 million, or $9.9 million at the exchange rate of $1.10 to one euro.

The top lot was a set of 13 full mint sheets of Bavaria’s earliest Numerals issue, dating to 1849-62. Representing almost all values from 1 kreuzer to 18kr (Scott 1-2 and 4-14), many of the sheets in the set, which were described as “museum-quality,” were unique or one of just two surviving.

Against its presale estimate of almost $1.4 million, the lot was sold for about $1.68 million, including the premium. Gaertner said the buyer was a private collector in Germany.

Another important lot was a large collection of Walt Disney-related postal items, postcards, and paper ephemera, much of it dating from before 1950. The auction house described it as “the greatest Disney collection in private hands.”

Many items bore evidently unauthorized appropriations of Mickey Mouse, Donald Duck, and other characters from the studio’s early repertoire, and a fair amount of what could be called “fan art”: amateur tributes such as hand-drawn cachets and fancy cancels showing the characters.

But many items were clearly official in nature, such as a corner card from RKO Radio Pictures of China, bearing a color image of Donald Duck, on a 1941 registered cover from Hong Kong to the United States.

Others were somewhat puzzling: How exactly did a Los Angeles Cover Club cachet honoring the 1934 Rose Bowl, at which Columbia famously defeated Stanford 7-0 on a rain-drenched field, come to use a figure of Mickey Mouse, pigskin tucked under his arm, charging down the field? It’s possible the cachet was an advertisement for the now-forgotten “D-M Co.,” maker of “Mickey Mouse Athletic Goods for your team.”

More recent items included stamps and collateral items such as imperforate proof sheets of Disney-themed issues from countries such as Lesotho. Filling 14 large boxes, the collection sold for $335,500.

Among notable single items, a splendid 1868 cover sent from Bavaria to Egypt bore a remarkable mixed franking: a Bavarian 18kr vermilion Numeral issue of 1862 (Scott 14) with a 6kr ultramarine Arms stamp of 1867 (17), augmented on arrival in Alexandria by an Egyptian 1-piaster rose red stamp of 1876 (13) to pay the inland rate to Cairo. The latter amount would have been due from the recipient.

Prior to the advent of the Universal Postal Union in 1874, it was not unheard-of for letters between far-flung countries without a bilateral postal treaty to bear stamps from both ends of the journey, separately paying each country’s part of the postal charges. Many of these exotic combination covers are highly collectible, and the cover in the Gaertner sale fetched $53,680.

An unused, no-gum 1848 2-penny stamp of Mauritius, with an early-to-intermediate impression (Scott 6 or 6a), formerly part of the famous Arthur Hind collection, sold for $36,235.

A mint, never-hinged Italian 50-lira Victor Emmanuel III stamp, overprinted “Deutsche Besetzung Zara” was issued in late 1943 for use in the German-occupied Dalmatian port of Zara (present-day Zadar, on the coast of Croatia). The city had been an Italian enclave since 1919, but Germany took over Zara and other Balkan territories after Italy capitulated to the Allies in September 1943.

The Scott catalogs do not list the Zara overprints, because it has never been adequately shown that their issuance was properly postal, rather than speculative. The Michel and Sassone catalogs (published in Germany and Italy, respectively) do list them, and in both references the 50-lire stamp is number 19.

Only 47 examples of this top value were issued — not counting the myriad fakes produced later to fool collectors. Accompanied by three separate certificates of authenticity, a necessity in an area such as this, the stamp sold for $28,850.

From 1855 to 1885, Britain maintained the right to issue its own postage stamps in Bangkok, capital of the country then known as Siam, now Thailand. Stamps from the neighboring colony of Straits Settlements (modern Singapore and parts of Malaysia) were overprinted with the letter B for this purpose.

A seldom-seen rarity of Bangkok, the 1885 32¢-on-2¢ surcharge (Scott 22), was offered by Gaertner in unused condition, with a couple of perf faults but otherwise unrepaired and with original gum. It sold for $22,140.