A few of my favorite Christmas stamp things 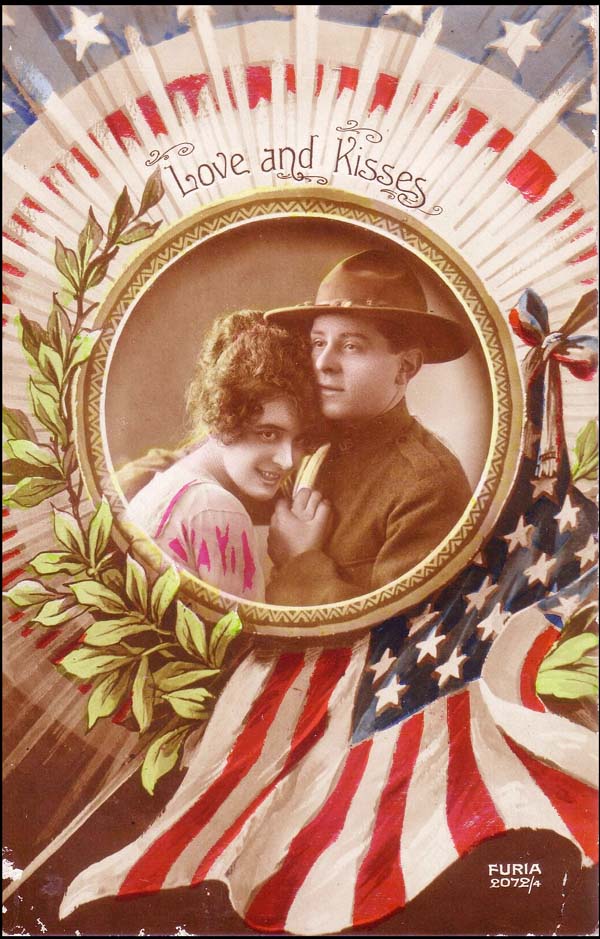 Figure 5. The picture side of the patriotic postcard shown in Figure 4, demonstrating what the American doughboy stationed in France wanted to do when he got home. Click on image to enlarge. 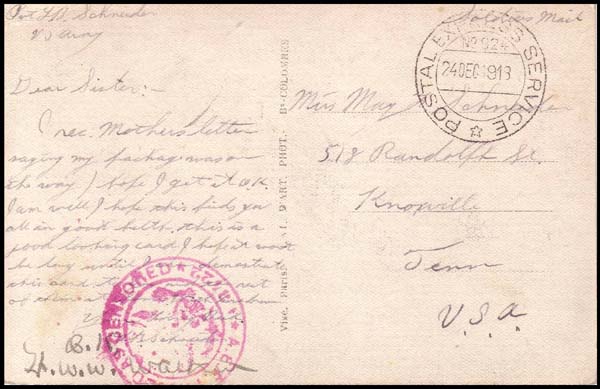 Figure 4. A soldier's postcard with censor marking mailed on Christmas Eve 1918 from Army Post Office 924 in Le Blanc, France, shortly after the end of World War I. Click on image to enlarge. 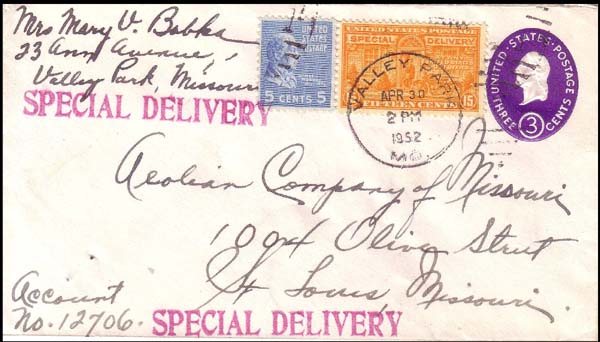 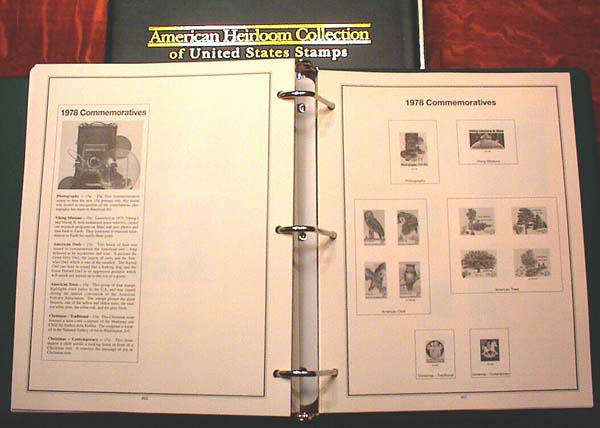 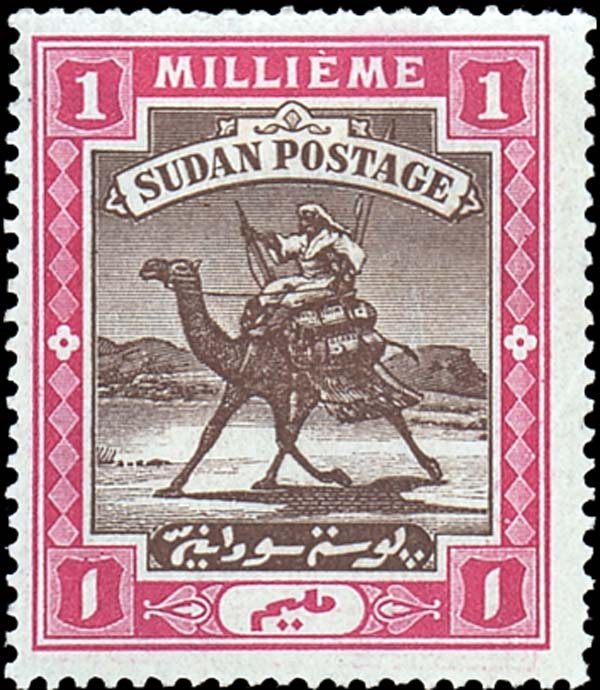 My Favorite Things from the musical The Sound of Music has mysteriously become one of the ditties played repeatedly on the radio this time of year. It is not really a Christmas song, except for associative lyrics about "snowflakes that stay on my nose and eyelashes" and "brown paper packages tied up with string" being "a few of my favorite things."

This year a new book was published that rapidly became one of my own favorite things: The Queen's Stamps by Nicholas Courtney. The book's subtitle The Authorized History of the Royal Philatelic Collection gives a really good clue to its contents. The 337-page tome ranks high on my list of the most fascinating philatelic books of all time.

I had a chance to meet the author at a reception at the National Postal Museum earlier this year.

A special exhibition of some of the spectacular material from the Queen's Collection is on display there until Jan. 11, 2005, so there is still time for you to see these fabulous stamps in person.

Courtney is a fascinating man in his own right. He is a historian and writer rather than a philatelist, but he has crafted a philatelic masterpiece that even noncollectors will enjoy.

The Queen's Stamps traces the history of the collection owned by the British royal family to its origins in 1856 when Queen Victoria's second son Prince Alfred was taken to De La Rue & Sons, printers of postage stamps.

Prince Alfred's interest in stamps was aroused, and he began a collection. The collection passed from Prince Alfred to his nephew, Prince George, the Duke of York, who eventually became King George V.

The king's stamp-collecting goal was a simple one — probably one we all share — to have the best stamp collection in the world. This book documents the acquisitions and tells fascinating tales about the stamps and the people involved in maintaining the collection.

The superb illustrations throughout the book are bound to make you drool. It is the sort of book you can keep by your bed and read a chapter before you nod off each night. Visions of philatelic rarities will dance in your head.

The Queen's Stamps is available from many booksellers. I ordered my copy through online-bookseller Amazon.com at www.amazon.com.

One of the best parts of the holidays is spending time with family. Before life got so hectic, families spent lots of time together. That doesn't happen so much today.

This year you can do your favorite family a favor by giving them a family hobby that parents and children alike can enjoy together for many years.

The perfect hobby, of course, is stamp collecting. Stamps are windows to the world. When a news report mentions Sudan, stamp collectors know where it is and instantly envision a stamp showing a mail carrier astride a camel dashing across the desert. A 1-millieme rose and brown Camel Post stamp (Sudan Scott 9) is shown in Figure 1.

One of the very best family-oriented philatelic products I have seen is the three-volume stamp album for U.S. stamps published by Mystic Stamp Co., the American Heirloom Collection, shown in Figure 2. It is housed in attractive, sturdy three-ring binders.

The album pages are designed in such a way that when the binders are opened and the pages are turned, the stamps or their black-and-white illustrations are on the right side and the facing page and the left has stories and background information about the stamps.

Just think of the benefits that could be gained by spending time as a family putting stamps into an album such as this. It would be quality time interacting with one another, solving mysteries of where to put the stamp and feeding on one another's inquisitiveness.

The kids and the adults would learn about the history and geography of the United States. The youngsters would acquire useful organizational skills that cannot be easily taught in ordinary schoolwork.

Be sure to request the company's U.S. stamp catalog when you order. It is as much fun as the albums, peppered with stories, trivia, fascinating facts, and loads of color pictures of mouth-watering stamps. It makes stamp collecting look like — dare I say it — fun! Imagine that.

Christmas reminds me of Santa's annual Christmas Eve trek. He really has it made. He gets to travel by air, but he doesn't have to submit to airport security or worry about delayed or canceled flights. The weather doesn't even bother him, except for maybe that one foggy night that earned Rudolf the Red Nose Reindeer a spot on the team.

When you think about it, Santa Claus is really the ultimate mail carrier. To be precise, he carries airmail special delivery. I don't remember any of my presents from Santa bearing special delivery stamps, but they might have been similarly marked as the cover illustrated in Figure 3.

When you think about it, Christmas is heavily dependent upon the world's mail systems. Children everywhere write letters to Santa at his address at the North Pole. Adults send holiday greeting cards to family and friends, often using Christmas-theme stamps, all of which give stamp collectors another specialty to collect.

Kim Gannon and Walter Kent wrote one of the most touching Christmas songs during World War II. I'll Be Home for Christmas is a plea from a soldier remembering Christmas celebrations at home and urging his loved ones to celebrate as usual because he will "be home for Christmas, if only in my dreams."

One of my favorite postcards is shown in Figures 4 and 5. A soldier mailed the postcard on Christmas Eve 1918 from Army Post Office 924 in Le Blanc, France. The armistice had been signed more than six weeks earlier, but this card was still examined and signed by a military censor.

In the poignant message to his sister, the soldier said that he hopes he gets his package: "I hope it won't be long until I can demonstrate this card to you and the rest of them at home."

You might wonder what "this card" demonstrates. If you look at the picture side, shown in Figure 5, you will see a handsome doughboy cuddling a winsome young woman beneath the inscription "Love and Kisses."

It is pretty obvious that this soldier was "home for Christmas," if only in his dreams. Tens of thousands of men and women in uniform are away from home this Christmas. Let's hope that next year they will all be home safely for Christmas.