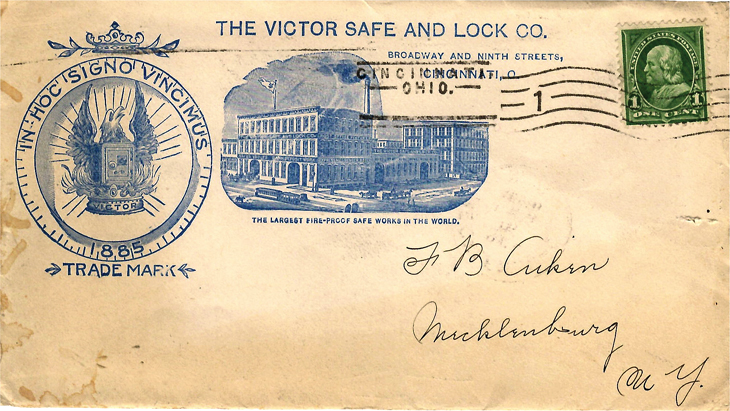 The type of safe that held documents for four generations of the author’s family was found on an advertising cover from the manufacturer. 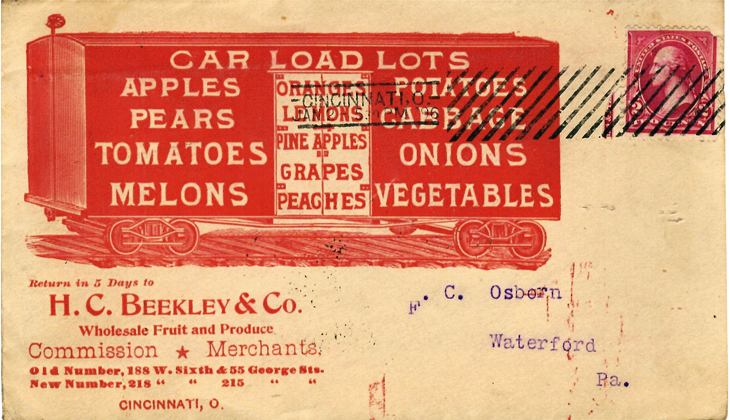 Trains got fresh produce to market more quickly, and advertising covers helped to deliver the message of speedy train delivery. 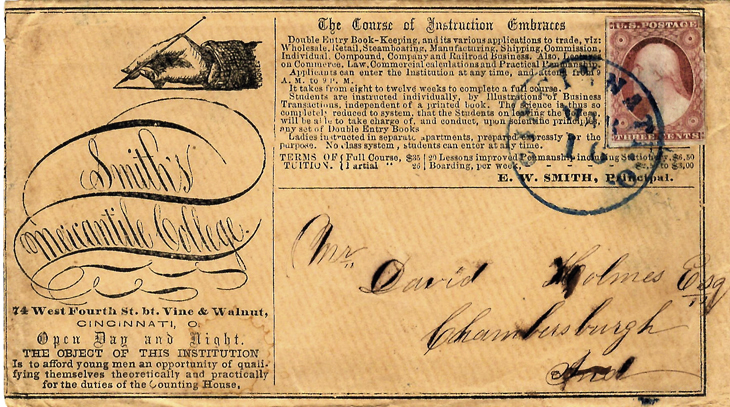 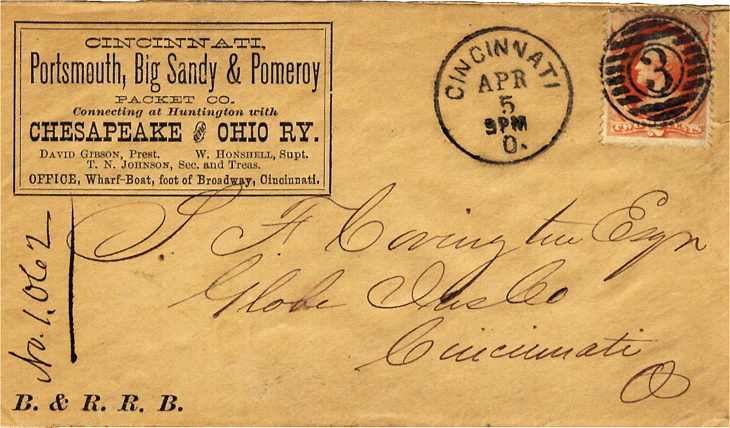 Ohio River steamboats, such as those run by the Portsmouth, Big Sandy & Pomeroy Packet Co., were essential movers of people and products in the 19th century, and advertising covers helped to attract business. 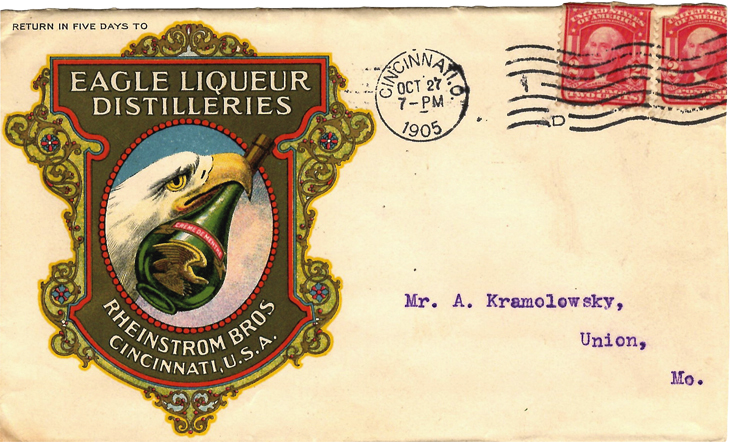 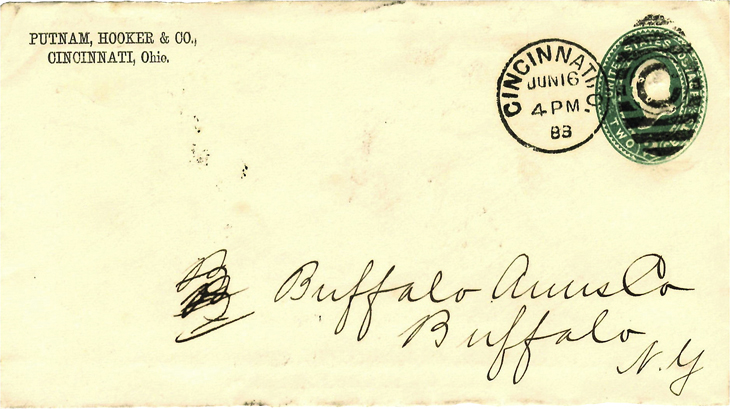 This cover has a very simple corner-card advertisement, with just the name and address of the company that mailed it. 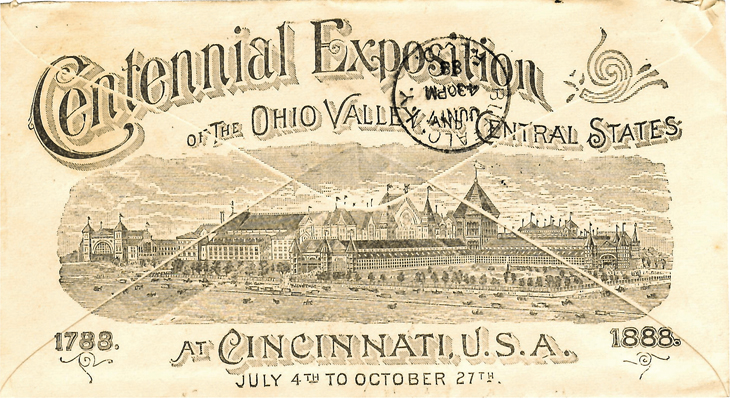 The back of the cover in the previous illustration is a far cry from the simple front, with an elaborate advertisement promoting Cincinnati’s centennial exposition. 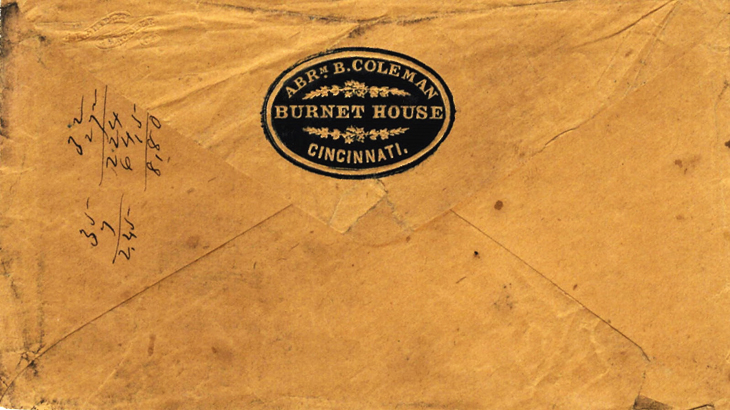 The back of a cover sent from the Burnet House in Cincinnati sometime in the early 1850s has an advertisement in a style called a “cameo.” 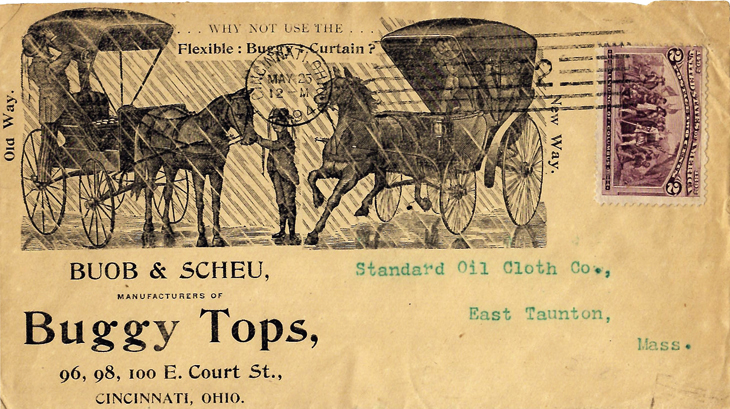 State-of-the-art buggy accessories, such as stylish and functional side curtains, appeared in advertisements that filled most of the space on the front of this firm’s covers. 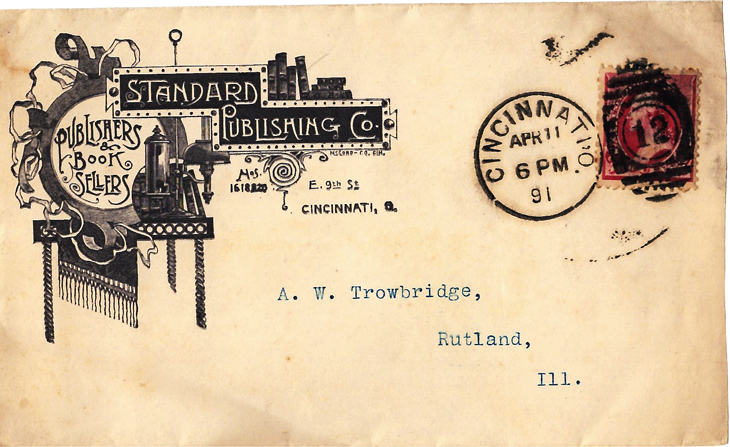 Cincinnati’s many publishing companies and booksellers often used their business envelopes to promote their products and demonstrate their printing capabilities.
Previous
Next

Around the middle of the 19th century, merchants, businesses and manufacturers began using specially printed mailing envelopes as a means of promoting their businesses and products.

My hometown is Cincinnati, Ohio, and I have been chasing Cincinnati-related illustrated advertising covers for the better part of 15 years.

The earliest Cincinnati advertising covers date to around the 1850s. The first illustration shows the reverse of a cover sent from what was then the newly built, extravagant Burnet House, which opened in 1850. Abraham B. Coleman was the first operator of the hotel.

This format of advertising on an envelope is known as a “cameo.” Printed with a blue background and embossed letters, cameo ad covers, especially with fancy illustrations, are highly cherished by advertising cover collectors.

It didn’t take long for the front of an envelope to become a very wordy billboard. Pictured nearby is a cover sent from Cincinnati in the early 1850s, promoting Smith’s Mercantile College, which offered instruction in bookkeeping and “practical penmanship.”

In our modern world it is easy to forget how important penmanship was prior to typewriters and computers. Businesses relied on clerks with readable handwriting, and business colleges such as Smith’s were happy to provide special penmanship courses.

According to the ad on the cover, the tuition for 20 lessons in penmanship (including stationery) was $6.50 — approximately an entire month’s wages for ordinary workers in the early 1850s.

Cincinnati became a major transportation hub in the 19th century, at first with steamboats along the Ohio River, such as those of the Portsmouth, Big Sandy & Pomeroy Packet Company, advertised on the cover shown here in a style that looks like a business card. This type of advertising cover is frequently referred to as a “corner card.”

Next in Cincinnati’s transportation history were railroads that carried both passengers and products, such as the produce on the advertising cover pictured nearby.

For personal transportation, there were buggies powered by horse, as shown on the cover illustrated here. Research regarding the 1894 Buob & Scheu cover led me to the interesting fact that there were 23 carriage and buggy companies in Cincinnati in the last decade of the 19th century. In addition to those manufacturers, there were suppliers such as Buob & Scheu making buggy tops and others making buggy whips, horse collars, tack and harnesses.

Another kind of advertising cover used a simple return address in the upper-left corner of the envelope, as seen nearby. The plain and simple front of the cover gives no insight regarding the company’s purpose (cotton goods and clothing), but the reverse, shown here, has a lavish and enticing public service ad for the Ohio Centennial Exposition, which was to take place July 4 through Oct. 27, 1888, to celebrate 100 years since the settlement of Cincinnati and the states that were formed from the Northwest Territory.

Cincinnati was and still is a major center for book and magazine publishers. In the 19th century, the Standard Publishing Co. used the image shown on the nearby cover to promote its business.

Until recently, a small safe manufactured in Cincinnati was handed down from one generation to another within my family. The same type of safe as my family’s is depicted on the cover shown in the next-to-last illustration, in the center of the eagle.

This little safe stood only about 3 feet high and some 25 inches deep, but it weighed almost 200 pounds. My great-grandfather George was the original owner. Upon his death, the safe was passed to his son, my grandfather Albert, who died before I was born. Thereafter the safe passed to his widow, then to her youngest daughter (my aunt), and most recently to one of her close friends.

The Victor Safe advertising cover in my collection weighs in considerably lighter than the safe, but provides lovely memories of great-granddad’s ridiculously heavy safe, which held all manner of family documents.

As the 19th century gave way to the 20th, advertising on envelopes became more sophisticated and colorful. The last cover pictured is an example from one of Cincinnati’s many distilleries. The multicolored eagle clutching a bottle of creme de menthe in its beak was printed by the Strobridge Lithographing Co., a Cincinnati firm most famous for its circus posters.

You can learn new and interesting things about your hometown by collecting its advertising covers. These covers frequently show images of long-forgotten products, some of which in turn might show up at antiques shops or even your attic.

If you are interested in genealogy, you might find an advertising cover from the shop your grandfather owned, or one from the romantic hotel your parents stayed in during their honeymoon.

If you are really lucky, someday you might even find an advertising cover that shows your great-granddad’s safe.