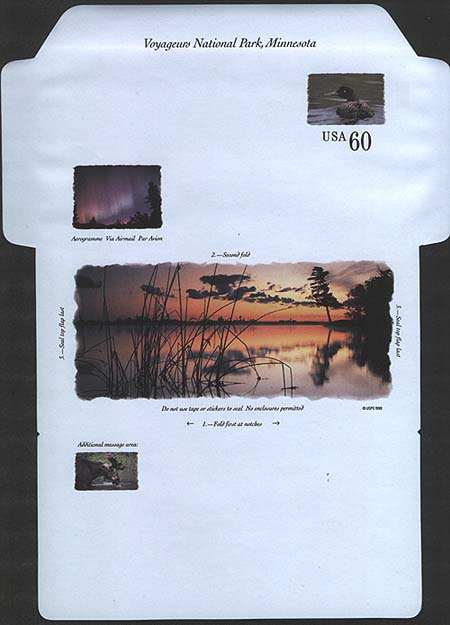 The U.S. 60¢ Voyageurs National Park aerogram. It was issued May 15 to meet the new aerogram rate.

For many years, certain United States stamps were specifically designated as airmail stamps. Most of them included the words "air mail" somewhere in the design.

It was also possible to mail a letter overseas using a less-expensive surface-mail rate, but the mail would then travel by ship and delivery would take much longer.These stamps were made to pay the higher airmail rates for mailing a letter overseas or within the United States. A letter sent airmail would travel by plane to its intended destination.

Most U.S. domestic airmail rates were abolished in 1975 because by then the majority of cross-country mail was being sent by airplane anyway.

In 1995 the United States Postal Service announced that the surface rate for international letter mail had been eliminated and that the word "airmail" would no longer appear on postage stamps.

From that point on, all mail to overseas addresses would be sent by air.

On Sept. 25, 1995, a 60¢ stamp depicting aviation pioneer Eddie Rickenbacker was issued. Although the stamp fulfilled the overseas half-ounce letter rate and featured an aviation theme as did past airmail issues, the stamp was not inscribed with the word "airmail."

The Rickenbacker stamp is shown on the bottom in Figure 1.

Because it is not specifically marked as an airmail issue, it is listed in the ScottSpecialized Catalogue of United States Stamps and Covers with regular postage stamps and is identified as Scott 2998.

The last airmail stamp listed in the 2000 Scott Standard Postage Stamp Catalogue,Vol. 1, published in April is the 1993 40¢ William T. Piper airmail shown on top in Figure 1.

It is identified as Scott C132 and is listed in the "Air Post" section of the catalog.

Stamps with Scott numbers beginning with the letter "C" are all airmail stamps of one sort or another.

Both the 1991 and the 1993 Piper stamps bear the inscription "USAirmail" directly above their 40¢ denominations.

The United States Postal Service recently revealed that a new series of stamps depicting scenic American landmarks has been planned to fulfill selected international postage rates. The first of these is a 48¢ stamp picturing Niagara Falls that was issued May 12.

The stamp is illustrated in Figure 2. Its 48¢ denomination pays the new rate for a half-ounce letter from the United States to Canada that went into effect May 30.

The issue dates for these additional stamps have not been revealed. The Postal Service recently announced that the Grand Canyon stamp will not be issued until next year because of a mistake made in the inscription below the photograph (see page 1 of Linn's issue of May 31 for more details).

Although some of these stamps have not yet been issued, the planned designs of all of them were released a few weeks ago and illustrated in Linn's issue of May 10. Each stamp design includes the small silhouette of an airplane next to the denomination.

Like the word "airmail" that once appeared on these stamps, the airplane symbol seems to show that the stamp is intended to pay an airmail or international letter rate.

Because of this new symbol within the design, it will be interesting to see in the coming weeks if Scott editors list the Niagara Falls stamp as an air post stamp or as a regular postage stamp.

Scott new issues editor David C. Akin told Linn's Stamp News that the primary reason for not listing recent international-rate issues in the Air Post section of the catalog was the lack of an airmail inscription on the stamp.

Over the years, other definitive stamps also have been issued with denominations that also fulfilled certain international rates, Akin added, and these are naturally listed in the regular postage section of the catalog.

For many years, the Scott catalog listed all airmail stamps with the regular postage.

The first airmail stamp issued by the United States was the 24¢ red and blue issue of 1918 showing the Curtiss "Jenny" biplane.

The stamp is illustrated at the top of Figure 3. Many collectors know that a famous error issue of the same stamp, known as the "Inverted Jenny," shows the airplane in the center of the design flying upside down.

The words "air mail" do not appear on the 24¢ stamp, nor did they appear on the 6¢ and 16¢ values that were issued later that same year.

The first U.S. stamp to carry the words "air mail" was the 16¢ issue of 1923, which shows the air service emblem in the center of its design.

The stamp is illustrated at the bottom of Figure 3.

Many U.S. airmail stamps appeal to collectors because they fulfilled postage rates that were less common than the basic domestic rate, or because they often showed an aviation design.

A 10¢ airmail stamp from 1969 pictured the first man on the moon, which is as far as manned flight has gone.

One of the most cherished sets of United States stamps is the Graf Zeppelin issue of 1930, issued for use on mail carried on the first round-trip Europe-Pan-American flight of the airship Graf Zeppelin.

The three stamps in the set were placed on sale April 19, 1930, and were withdrawn from sale June 30, a little more than two months later.

A number of U.S. postal stationery items are designated for international use.

Most recently, a 60¢ aerogram and a 55¢ postal card were issued May 15 to meet additional new international rates.

The 60¢ Voyageurs National Park aerogram is shown in Figure 5.

The 55¢ Mount Rainier postal card clearly resembles the publicized designs of the Scenic American Landmarks stamps, and it also includes the small airplane silhouette adjacent to the denomination.

When Scott catalog numbers for Scenic American Landmark issues are announced, the information will be published in Linn's Stamp News.

Collectors who have an interest in U.S. airmail stamps and their use on mail may be interested in membership in the American Air Mail Society.

The AAMS, organized in 1923, publishes the monthly Airpost Journal, as well as the American Air Mail Catalogand the quarterly Jack Knight Air Log.