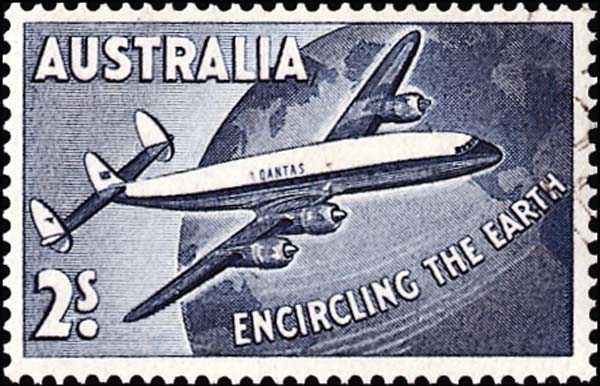 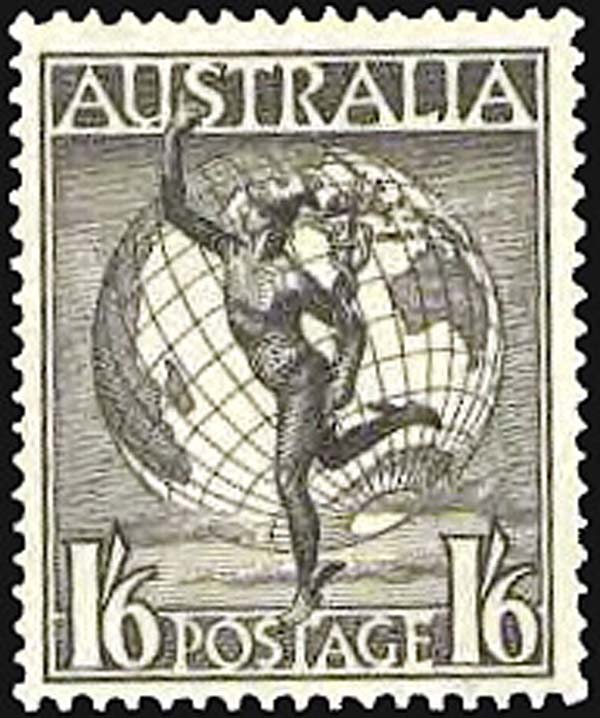 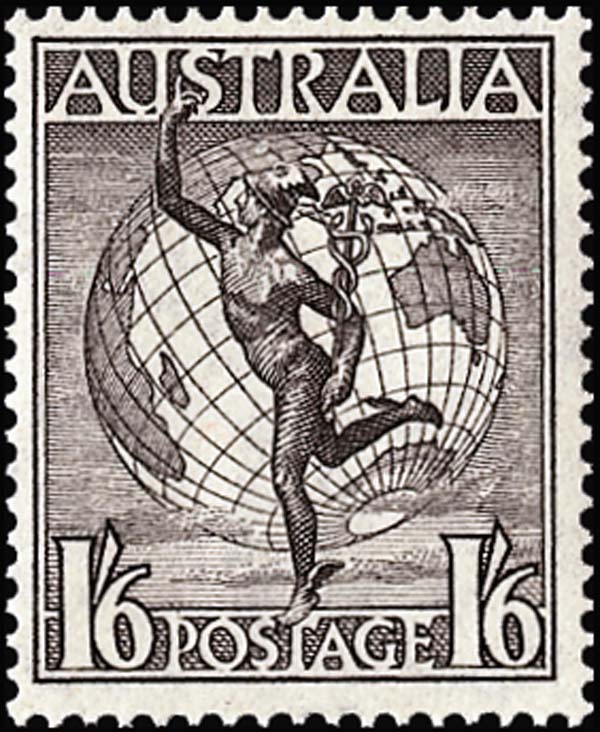 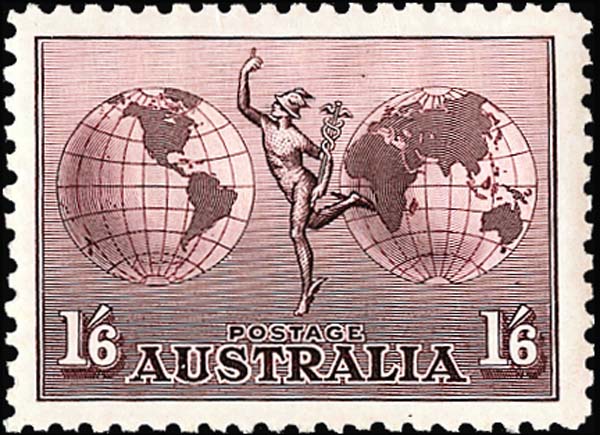 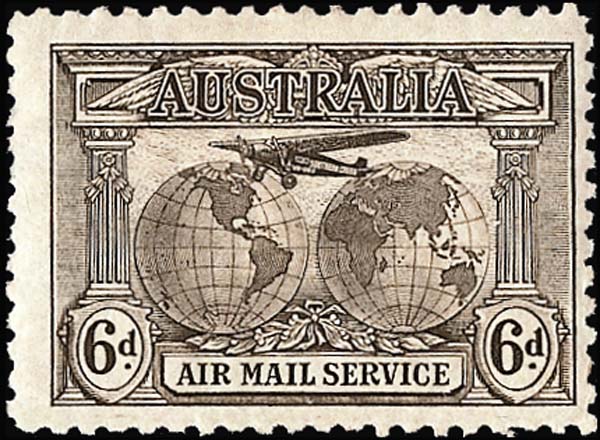 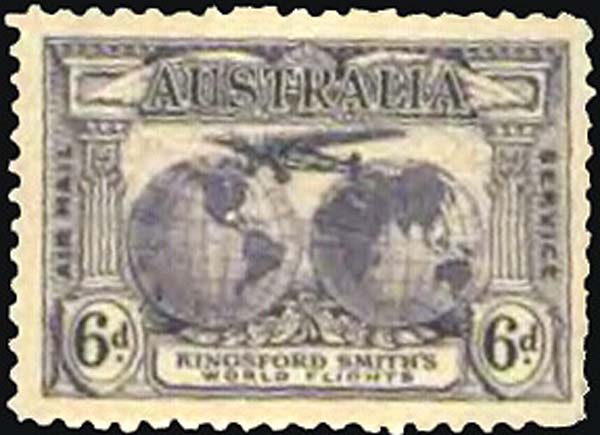 Collecting one category of stamps, such as definitives (regular-issue stamps) or commemoratives (stamps issued for a short time), is one way to narrow the focus of a collection. Some collectors like doing that because it is more affordable and achievable than trying to collect them all.

But focusing on one of the basic categories isn't always a great idea. For example, a collector who wishes to specialize in United States definitive stamps needs to have deep pockets. Even U.S. commemorative stamps include a few that are pricey.

The U.S. airmail stamps are certainly few in number, but for those on a modest budget, the Graf Zeppelin airmail stamps (Scott C13-15) and the Inverted Jenny error (C3a) make such a collection impossible.

And yet, airmail stamps are worthy of consideration as an area of specialization. The stamps were issued for the specific purpose of paying a fee for transporting a letter from one place to another by air.

In today's world, that might sound like a quaint anachronism, but it has not been that many years ago when letters mailed by regular surface mail took many days or weeks longer to reach a recipient. Airmail was an expeditious way to improve the speed of communication.

The easiest way to start a collection of airmail stamps is to select one country or a group of countries and concentrate on acquiring the stamps in your preference of mint or used condition.

Check the listings in a recent edition of the Scott Standard Postage Stamp Catalogue. You will find airmail stamps in the catalogs listed with the "C" catalog-number prefix. The airmails of any country are listed after the regular postage, postal fiscal and semipostal listings.

Australia is a good country for an airmail collection. The Scott standard catalog lists only eight Australian airmail stamps. They have a total catalog value of $78.75 for unused, hinged and some mint stamps and $28.80 for used, making a nice fit for modest budgets. And yet, this one-of-each approach tells only part of the story.

The first Australian airmail stamp was issued May 20, 1929, in advance of the proposed air service between Perth and Adelaide that was initiated 12 days later.

The 3-penny Airplane Over Bush Lands stamp (Scott C1), shown in Figure 1, paid only the fee for the airmail service. Letters sent by air still needed the standard postage in addition to the 3d airmail stamp.

In 1929, the letter rate was 1½d. To use this 3d stamp for the airmail service between Perth and Adelaide, a sender had to add an additional stamp or stamps amounting to another 1½d, for a total of 4½d for postage and airmail service.

The 1929 airmail stamps are a superb demonstration of a phenomenon that occurs with engraved stamps, which use the so-called wet method. The plates for engraved stamps have the design of the stamp in recess (below the surface of the plate).

Ink is forced into the recessed areas, and the excess is wiped away. When paper is placed on the inked plate, the press applies great pressure to force the paper into the plate where it picks up the ink.

Paper accepts ink more readily if it is moistened prior to printing. Once the paper dried, however, the stamps had a tendency to shrink, affecting the finished size depending on the direction of the mesh of the paper.

On the 1929 Australian airmail stamp, this means that the design of stamps printed on paper with a vertical mesh shrunk top to bottom and measure 31 millimeters by 22mm. Those printed on horizontal-mesh paper have a printed design that measures 31¾mm by 21½mm. The design is measured from the stamps' printed borders and not from the perforations.

The 1929 stamps were issued in panes of 80 and in booklets that sold for 3 shillings and contained three panes of four stamps.

A completely intact booklet is a big-ticket item, but a single booklet pane has a Scott catalog value of $125. The pane is worth seeking during your next shopping spree.

You can often spot individual stamps that came from booklets because they have tiny position dots in the stamp margin just above the "R" in Australia.

Unfortunately, the perforations punched out the dot in many cases, but if you look, you might find one.

While looking for the booklet pane, you also might want to buy one of the 1929 airmail stamps that has the perfin (perforated initials) "O S" (Scott OCC1). The "O S" stands for "On Service." These Official stamps were used for government correspondence.

Some stamp collectors shun the Official stamps with perfins, but they are collectible varieties and are listed in the Scott Classic Specialized Catalogue of Stamps and Covers 1840-1940. Some specialized catalogs value the perfinned Official stamp at about four times as much as the ordinary stamp.

Australia issued two more airmail stamps in 1931, both 6d values that covered the airmail fee for a 1-ounce letter sent within Australia.

The first of the Kingsford-Smith stamps, the 6d gray-violet airmail stamp shown in Figure 2 (Scott C2), was issued March 19, 1931, as part of a three-stamp set honoring pioneer aviator Charles Kingsford-Smith.

Among his legendary achievements in early aviation is the piloting of his Fokker Trimotor Southern Cross across the Pacific from Oakland, Calif., to Brisbane, Australia (via Honolulu and Fiji), in eight days in 1928. That year Kingsford-Smith also made the first nonstop flight across Australia and the first flight across the Tasman Sea to New Zealand.

The set's two lower values — 2d and 3d stamps (Scott 111-12) — are inscribed "POSTAGE" vertically along the pillars at both sides of the stamp, but the 6d airmail stamp is inscribed "AIR MAIL" and "SERVICE" in those locations.

A couple of interesting varieties can be collected with this stamp. A re-entry caused doubling that is very prominent on the "T" of "AUSTRALIA" and to a lesser extent on the "FO" of "KINGSFORD" and the "LD" of "WORLD." This occurred only in position No. 65 on plate No. 3, making it quite a scarce stamp.

Another constant variety is one called the "extra island" variety. The island is actually an extra spot of color that appears just east of Madagascar, off the coast of Africa in the globe on the stamp's right.

On Nov. 4, 1931, a very similar 6d brown Kingsford-Smith airmail stamp (Scott C3), shown in Figure 3, was issued. Instead of having "AIR MAIL" and "SERVICE" along the sides of the stamp, the words "AIR MAIL SERVICE" are inscribed in the tablet at the bottom of the stamp, replacing the text honoring Kingsford-Smith's record-setting flight.

The 6d brown airmail stamp was overprinted "O S" for use on Official airmail correspondence. The Scott catalog lists this stamp, shown in Figure 4, as CO1. It is valued at $22.50 mint or used, a modest amount for a stamp whose quantity is recorded as 40,000. It is difficult to find this stamp postally used and even more so on cover.

The stamp shows Mercury, the messenger of the gods, and two hemispheres. It was printed on unwatermarked chalk-surfaced paper, with gauge 11 perforations.

This stamp was dry printed, meaning the paper was not moistened as much as with wet printing. Dry printing gives the stamps a slightly more crisp appearance, and it eliminated the problem of paper shrinkage.

There is one variety of note, an extra spot of color (or so-called island) to the west of Java on the globe.

In October 1937, another 1sh6d airmail stamp (Scott C5) using the same Mercury and Globe design was issued on thick chalk-surfaced paper watermarked small crown and multiple C of A. The stamp is perforated gauge 13¼ by 13¾.

This is a great stamp for collectors who love flyspecking (identifying and collecting minor varieties). There are retouched shading lines, a shifted transfer, and yes, even an extra so-called island in the Pacific on the hemisphere on the left.

Another variety that is not listed in the Scott standard catalog or the Scott Classic specialized catalog, is the 1sh6d airmail stamp issued Feb. 12, 1948, on uncoated thin paper, again with the small crown and multiple C of A watermark and perforated gauge 13½ by 13¾.

The thin-paper variety can be recognized fairly easily when held between a pair of tongs and lightly flicked with a forefinger. It makes a crisp snap as opposed to the less crisp tone of the thicker paper.

Technically a definitive stamp, this 1sh6d sepia Mercury and Globe airmail stamp (Scott C6), shown in Figure 6, paid the rate for airmail to Britain, Europe, Africa, Asia and North America, for a ½-ounce letter. Although not service inscribed, the stamp was used primarily for payment of that airmail rate.

The perforations gauge 14½ by 14¾, and the stamps are on small crown C of A watermarked paper. One of the positions on the sheet has a constant variety that resulted in an extra so-called island below Tasmania in the globe behind Mercury.

In 1956 another 1sh6d sepia airmail stamp with the same design (Scott C7), shown in Figure 7, was issued on unwatermarked paper.

There is one notable variety — a slight doubling of the last "A" in "AUSTRALIA." You can find all of these varieties by training your eye to see them and then searching until you do.

Collecting Australia's airmail stamps could be your introduction to the world of airmail. The stamps themselves offer inexpensive yet eminently findable and affordable challenges. If you decide to find the stamps on airmail covers, the challenge and the fun increases.