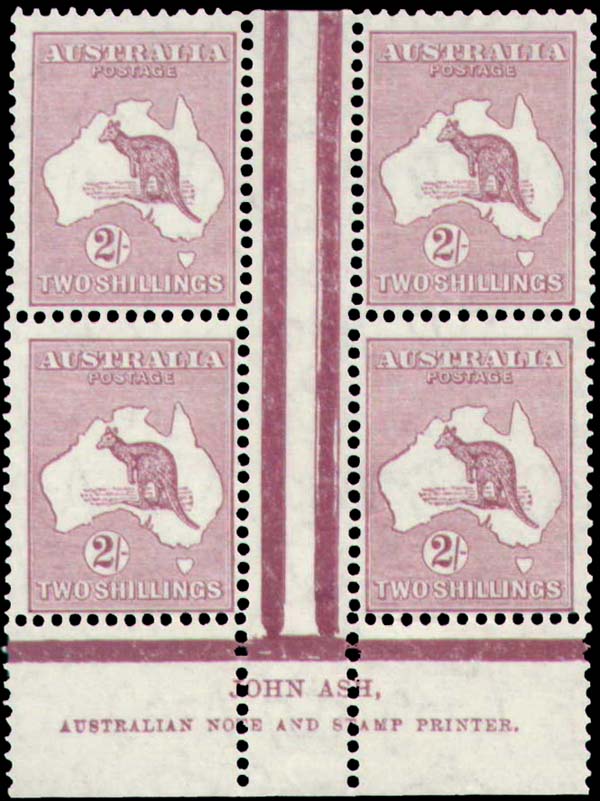 Block of four of the 2/- Kangaroo and Map stamp with a John Ash printer's margin imprint.

Die variety III is shown on the left, with die variety IV on the right.

Die variety I is shown on the left, with die variety II on the right.

Watermarks numbered 8, 9 and 10 in the Scott catalog, shown left to right, resemble each other closely, but with diligence collectors can learn to tell them apart.
Previous
Next

Australia's first postage stamps, picturing a map and the likeness of the famous hopping marsupial, are a good choice for collectors seeking a classic series that can be developed into a specialized collection on a reasonable budget. Even though the Kangaroo and Map definitives, nicknamed the 'Roos, are nearly 90 years old, the stamps are readily available, and, apart from high values and a few scarce varieties, they are affordable for even modest pocketbooks.

Prior to Australia's federation in 1901, each of the states was a British colony that issued its own stamps.Australia is much like the United States in that it is a federation made up of six states and two territories.

For a period of a dozen years after federation, each state continued to have its own stamps, although gradually some postal paper was issued for the Commonwealth of Australia.

The first stamps issued by Australia in 1902 did not pre-pay postal services. They were postage due stamps. These were followed by postal stationery items.

Monetary prizes were offered for the winning designs. By the conclusion of the competition, 1,051 designs by 533 contestants had been considered. The prizes were awarded, but alas, none of the winning designs were actually made into postage stamps. Instead, the postmaster general requested an "outline of Australia" (map) design.

A series of stamp designs showing an outline of Australia were made, one of which superimposed a pair of kangaroos on the map.

Thomas remembered a design from the competition that showed a single kangaroo in a pose that he liked. This entry had been submitted under the pseudonym Baldy.

A new design was prepared according to Thomas' specifications, showing an outline map of Australia and Baldy's 'Roo. This design was approved with one modification that removed a clump of grass from the left of the animal.

Some stories say the clump of grass looked too much like a rabbit poking his head up out of a hole. Rabbits, an introduced species in Australia, are a nuisance in the pasture lands, so the offending clump-of-grass-cum-rabbit was eradicated.

The final design made its first appearance on a stamp in 1913. There were 15 stamps with different face values in the 1913 series that was issued over many dates and with numerous varieties.

This simple design masks a surprisingly complex but fun series of definitive stamps.

High values of the Kangaroo and Map stamps include values of 5/-, 10/-, £1 and £2. These are primarily bicolor stamps. Because of their limited use and low quantities produced, they might be out of reach of many budgets.

As mentioned earlier, the low values are still very affordable. The penny values are very inexpensive and can be acquired in quantity and on cover at very modest cost.

The first job a collector must face in collecting the Aussie 'Roos is identifying the stamps by catalog number.

In the United States, most collectors use and are familiar with the Scott catalog. Aussie 'Roo stamps are listed in both Vol. 1 of the Standard Postage Stamp Catalogue and in the Classic Specialized Catalogue of Stamps and Covers 1840-1940. These are certainly adequate for basic identification and cataloging.

Watermarks are designs impressed into the paper during its manufacture and serve as a security device.

The first three Australian watermarks, shown in Figure 1, do resemble one another fairly closely. With practice, most collectors will be able to quickly discern the differences.

The Australian watermarks designated by Scott as Nos. 8, 9 and 10 are similar to each other in appearance. Watermark 8 has a large, wide crown perched on top of a wide "A." The orb and cross at the top of the crown rest on a straight line that connects two triangles.

Watermark 9 has another wide crown, but it rests on a narrower "A." The orb and cross on the top of the crown rest in a gully between two points on the crown.

Watermark 10 is similar to watermark 8 in the design of the crown, except that both the crown and the "A" are much narrower. I find the easiest comparison point to be the band at the bottom of the crown, which is significantly different between watermarks 8 and 10.

Two other watermark designs can be found on 'Roo stamps, but they do not cause collectors too much difficulty

The whole watermarking task becomes much less confusing when you look at Table 1, which shows which stamp values appear with the various watermarks.

Some good news is that the watermarks on Australian stamps are almost always discernable without the use of watermark fluid.

Four die varieties are listed by Scott. Many collectors will take one look at that small print and be turned off by it, but the reward is in the reading. In the case of the 'Roo stamps, not reading the fine print is a terrible idea. Why? Because the die varieties can make a big difference in the value of a stamp, and knowing how to spot the differences can save you money or help you find a whopping bargain.

What are die varieties? For the answer to that question, I recommend that you read the well-written introduction to the stamp printing processes that can be found at the beginning of each volume of the Scott Standard Postage Stamp Catalogue. From this you will learn how stamp designs can be made into steel dies from which printing plates can be manufactured.

The 'Roo stamps were printed by letterpress from electrotype plates based on a steel die. The denomination numeral and text were left blank in the die and were added by inserting value plugs into working dies used in the process to create the plates.

The dies had minute varieties, which collectors can spot. These are the die varieties listed in the Scott catalog.

You can identify them by looking closely at the stamps with a good magnifying glass.

Die I has a break in the left frameline just opposite the top of the letters of the denomination. A portion of a stamp illustrating die 1 is shown in the left half of Figure 2.

Die II has no break in the frameline. A portion of a stamp illustrating die II is shown in the right half of Figure 2.

Die III has a break in the left frameline just opposite the kangaroo's eyebrow area. A portion of a stamp showing die III is shown in the left half of Figure 3.

Die IV has the same break in the frameline as die III, but it also has another break to the frameline at the top of the stamp just above the ST in AUSTRALIA. A portion of a stamp showing die IV is shown in the right half of Figure 3.

Table 2 shows which stamp values may be found in each of the die varieties.

To illustrate what sort of difference the die varieties can make, the 2002 Scott catalog shows a value of $45 mint, $18 used for die II of the 6d value in watermark 8. The same stamp with die III is significantly more valuable with a catalog value of $1,000 mint and $300 used.

Because these stamps were used in large quantities for a long period of time, they were printed frequently.

In fact, five different printers were employed in their production. They are: J.B. Cooke, T.S. Harrison, A.J. Mullett, John Ash and W.G.C. McCracken. The sheets of stamps bore the imprint or monogram of the printer in the margin, and these marginal inscriptions, such as the John Ash printer's margin imprint on the block of four 2/- Kangaroo and Map stamps shown in Figure 4, give collectors yet another collectible feature to seek out for their collections.

When the shades, perforations, official overprints and perfins, specimen overprints, plate varieties, a B.C.O.F. overprint in 1947 and postal usage are added to watermarks, varieties and imprints, the Australian 'Roo stamps present lots of challenging, affordable fun.