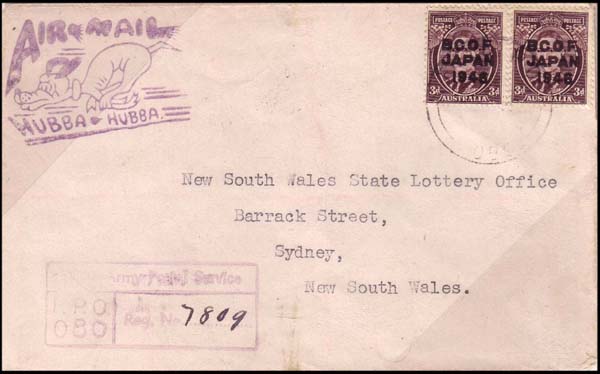 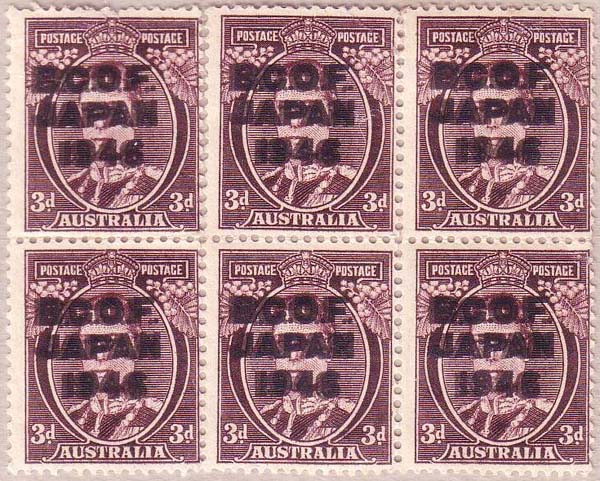 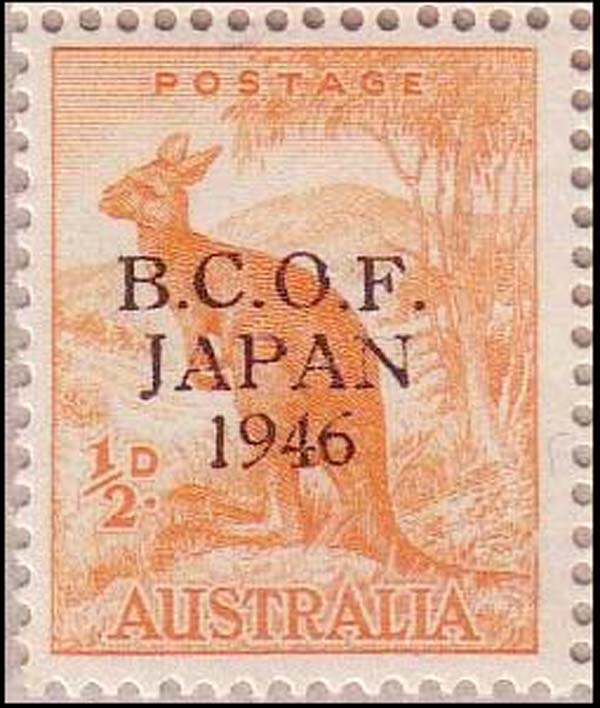 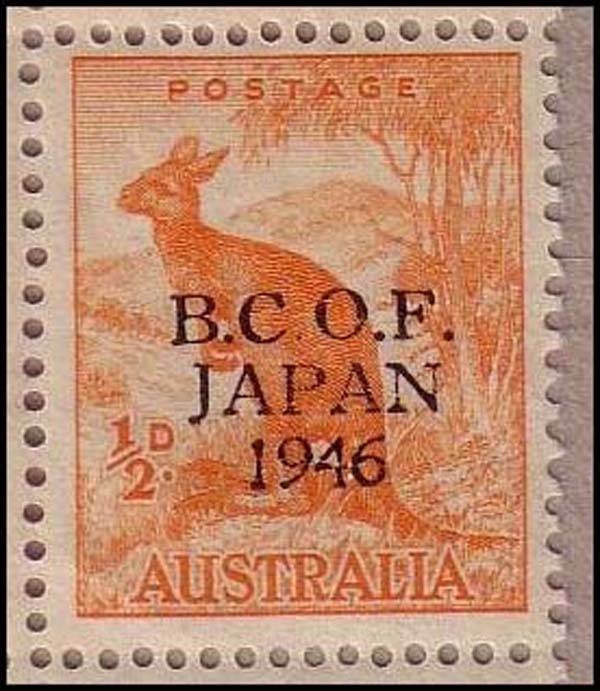 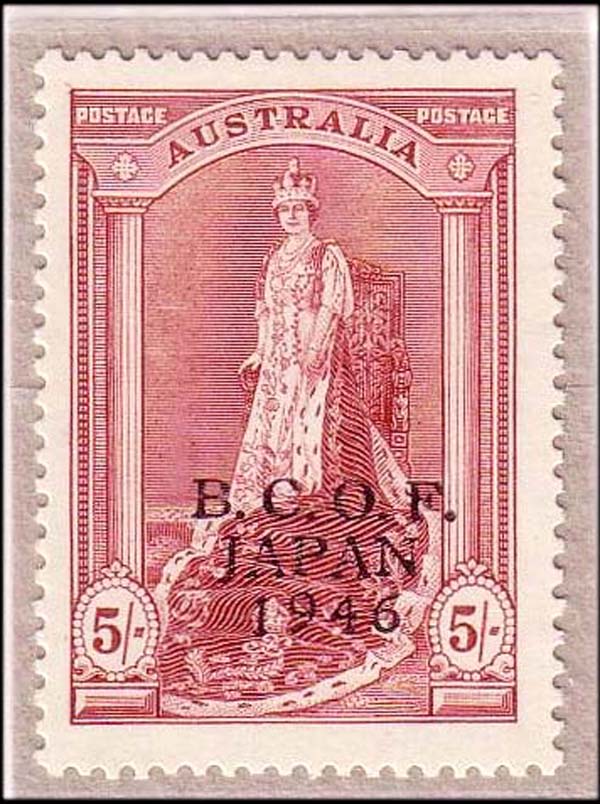 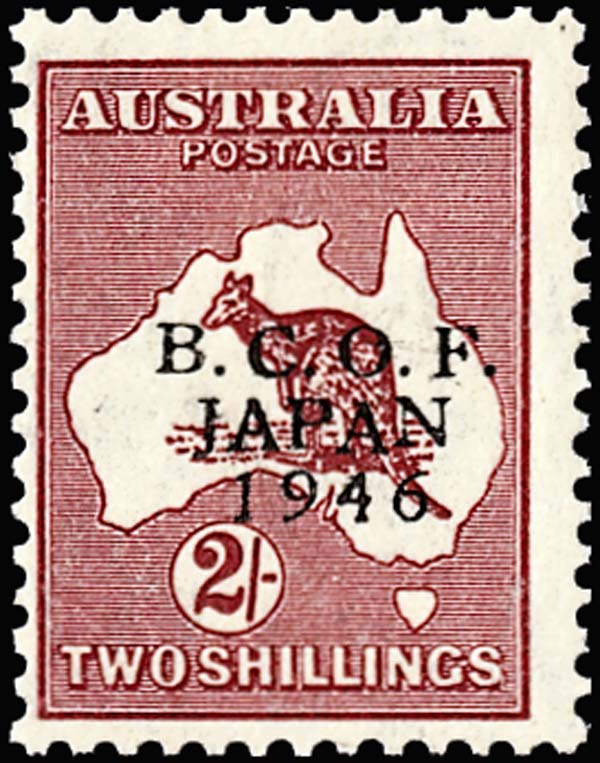 Who occupied Japan at the end of World War II? Ask most Americans this question, and a majority would answer "the United States." That's only partly correct.

The British also sent a multicountry contingent that served together as the British Commonwealth Occupation Force. The BCOF included military personnel from Great Britain, India, New Zealand, and Australia. The Australian force was the largest contingent.

Each component of the BCOF contingent used its own military post offices, postmarks and, where necessary, postage stamps.

Australia eventually issued military stamps in 1946-47 for use by its military occupation personnel by overprinting regular Australian postage stamps. The ScottStandard Postage Stamp Catalogue lists these military stamps in the back of the Australia section, with catalog numbers prefixed "M."

At first, however, the regular nonoverprinted stamps were in the post offices.

The BCOF was assigned to the severely devastated Hiroshima prefecture, where its duties included assisting in cleanup operations, humanitarian aid, repatriation of returning Japanese soldiers and the disposal of stockpiled Japanese munitions.

A black market developed when the military moved into the Hiroshima area with an abundance of food and supplies.

The black market was illegal, of course, but probably inevitable. The Australian military clamped down on monetary transactions, but resourceful soldiers circumvented new regulations by using black market profits to buy the nonoverprinted postage stamps at the base post office. The stamps could then be sent home to Australia to a family member, trusted friend or accomplice who could take the stamps to the post office and receive face value less 5 percent.

It did not take military brass very long to figure out this scam, and experiments with overprints on stamps were conducted in September 1946.

Two different type styles were used for the overprints. A thin type with serifs was used on the ½d stamp. The overprint used on the 1d and 3d stamps had thick sans serif type.

The problem with this plan was that the Australian military in Japan did not go through the proper channels and gain the necessary permission to overprint the stamps. As quickly as they were released, the stamps were withdrawn. Uses are known dated Oct. 11, 1946, but they are very rare.

The military then proceeded with acquiring the proper permission, and a complete set of seven values was finally officially issued May 8, 1947.

The stamps were those available at Australian base post offices in Japan for those rates for which stamps were necessary. These were ½d, 1d, 3d, 6d, 1-shilling, 2sh and 5sh stamps.

All of the overprinting was done locally at the Hiroshima Printing Works using Japanese labor working under the direction of the Australian military.

Setting the thin-serif type into forms from which the overprints were made proved to be a challenge. The results were rife with inconsistencies, making these stamps a challenge to collect in all the permutations that exist.

The Scott standard catalog once listed several of the varieties, but it no longer does so. The varieties are listed in the Scott Classic Specialized Catalogue of Stamps and Covers 1840-1940 and other specialized catalogs.

Non-Scott-listed varieties include a ½d wrong font "4" stamp variety shown in Figure 5, plus ½d, 6d and 1sh stamps with a period after "JAPAN," and others. These varieties are not easy to find, but their scarcity makes looking for them worthwhile.

The broad sans-serif 1d and 3d stamps are much simpler to collect.

Another variety in later printings in one position on the sheet has the "B" in "B.C.O.F." broken so that it resembles a "J."

One printing of the overprint on 1d stamps is in a blue-black ink that is quite distinctive from the black ink normally used. Both are dark, however, and you need good light to do a proper identification.

These military stamps were never very plentiful, especially the 1sh, 2sh and 5sh values. Acquiring a basic full set of seven stamps in either unused, hinged condition or used condition will set you back about $125. The greater challenge is finding the stamps legitimately used on covers paying correct rates.

There is good reason this is so challenging. Most of the mail sent by Australian military personnel serving in Japan was sent at a concessionary rate. In fact, letters sent by sea mail to Australia were free and required no postage whatsoever.

Other postal rates to Australia were reduced. The most common rate was 3d for a ½-ounce airmail letter. Registration was also 3d for a basic service without compensation for the contents.

A registered airmail cover sent from Australian Army Post Office No. 080 at Hiro is shown in Figure 7. The two 3d stamps paid a concessionary 3d for airmail to Australia and 3d for registration.

Most mail from the Australian BCOF had no stamps. The smaller percentage of stamped mail bore either one or two 3d stamps. That makes all other denominations really quite scarce postally used. The 5sh stamps are especially rare on cover, with most being found on souvenir covers.

An odd aspect of all of this is that the military placed a limit of how many BCOF stamps an individual could purchase at any one time. The limit was 10sh, unless the mailer had special permission. This restriction supposedly was imposed to minimize the risk that stamps would be used in the black market trade.

But because the overprinted stamps were not convertible to cash, there was no real need for the limit.

Nineteen Australian base post offices were scattered throughout the Hiroshima prefecture and in Tokyo. These post offices were numbered, and specialized reference works such as The Postal History of Australian Forces in Japan & Koreaby Phil Collas and published in 1994 by the Royal Philatelic Society of Victoria orAustralian Military Postal Services 1914 – 1950 by Edward B. Proud will help the collector sort through the problems of figuring out when the post offices operated and in what location.

Some of these post offices existed for a short time or served a small number of troops, so some of the post office numbers are difficult to find.

The stamps were discontinued in February 1949, just shy of two years after their official release, although Australia continued to be part of the occupation forces into the 1950s.

Ordinary Australian stamps were used by the military during this later period.

For collectors who like to pick subjects that can be affordably completed, Australian BCOF military stamps might be a good choice. The stamps are not exactly inexpensive, but neither are they beyond the reach of an average collector.