Back from the dead: resurrected countries 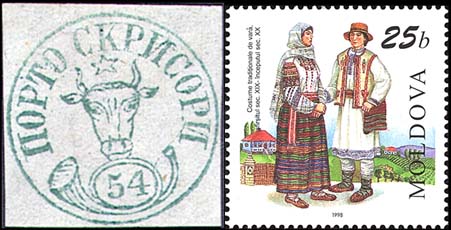 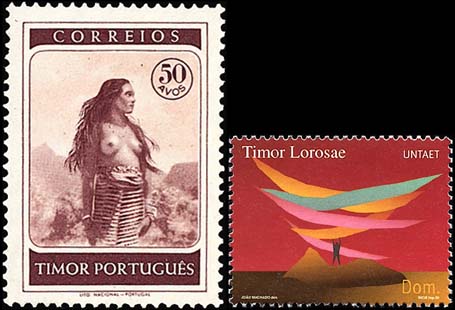 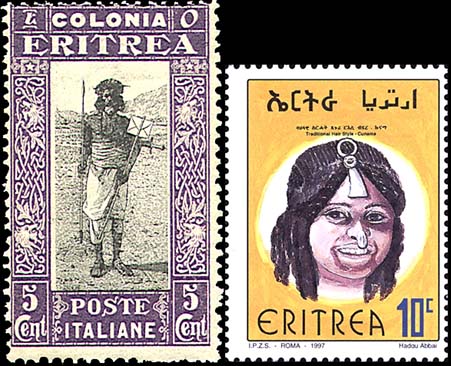 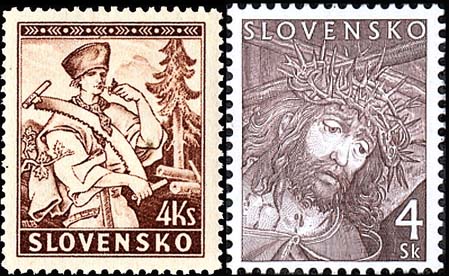 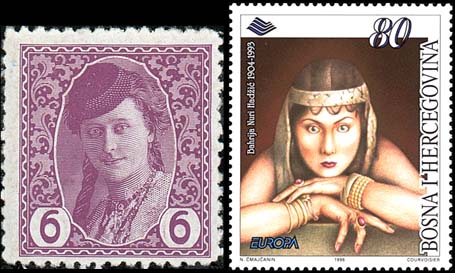 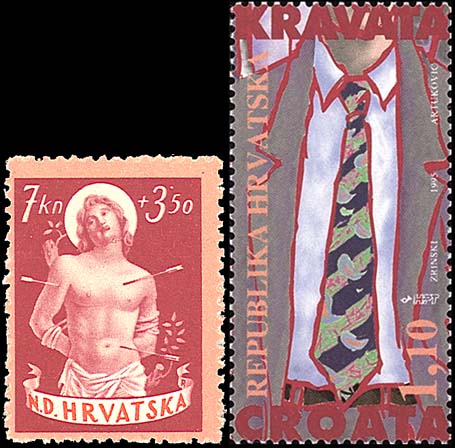 A 7-kuna+3.50k Martyrdom of St. Sebastian semipostal stamp, Scott B56, from wartime Croatia is shown beside a 1.10k Businessman's Necktie modern Croatian stamp, Scott 228. Click on image to enlarge. 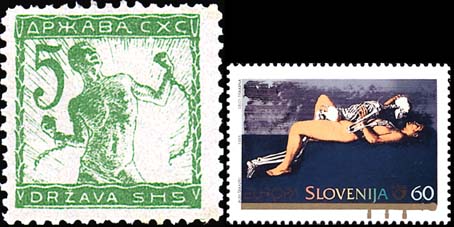 Stamps of old and new Slovenia. A 5-filler green Chain Breaker stamp, Yugoslavia Scott 3L2, is shown beside a modern 60-tolar Skeleton of Death Lying with Bride, Scott 229. Click on image to enlarge. 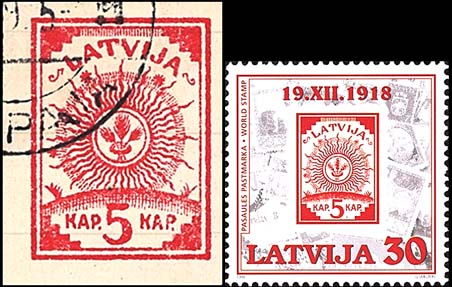 Stamps of old and new Latvia: a 5-kapeikas Coat of Arms definitive, Scott 1; and the 30-santimu World Stamp Day commemorative, Scott 474. Click on image to enlarge. 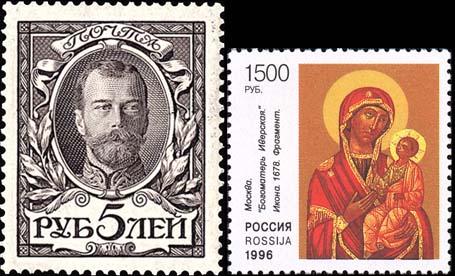 Stamps of old and new Russia: left, a 5-ruble black-brown Nicholas II stamp, Scott 104; right, a 1500r Our Lady of Iverone Icon stamp, Scott 6356a. Click on image to enlarge.
Previous
Next

Dead countries are a popular collecting area for many collectors numbed by the seemingly limitless proliferation of stamp issues from active stamp-issuing entities. Collecting a dead country offers the collector both the charm of nostalgia and a finite limit for a collection.

Les Harding in Dead Countries of the Nineteenth and Twentieth Centuries defines a dead country as "a place, not necessarily a sovereign country, that once issued postage stamps, but now no longer does so."

The Millennium Edition of Linn's World Stamp Almanac lists nearly 600 dead countries. Most of its listings, however, are not really countries, per se, but offices abroad, military occupations or plebiscite areas.

Dead countries are usually good for at least one Refresher Course column per year, the most recent being Michael Baadke's offering in the March 12, 2001, Linn's.

One problem with collecting a dead country is that you cannot be certain that it will remain dead. The 1990s were remarkable for a number of reasons, not the least because of the resurrection of a host of long-dead countries.

The most spectacular examples come from the collapse of the Union of Soviet Socialist Republics, now, itself, a dead country. While most of the great multinational empires died as a result of World War I, the voodoo of communism held the corpse of the Russian Empire together until nationalism drove a stake through its heart, finally allowing it to decompose at the end of 1991.

Stamp-issuing entities that rejoined the land of the living as a result of the dissolution of the prison of nations, as the USSR was sometimes called, include those that had remained silent since being gobbled up by the formation of the USSR in 1923: Armenia, Azerbaijan, Georgia, Russia and Ukraine.

Contrary to the listing policies of most major stamp catalog publishers, Russia ceased to exist as an independent nation when the Russian Soviet Federated Socialist Republic joined the USSR in 1923.

Before-and-after stamps of Russia are shown in Figure 1: a 5-ruble black-brown Nicholas II stamp, Scott 104; and a 1,500r Our Lady of Iverone Icon commemorative stamp, Scott 6356a.

The first countries to successfully withdraw from the Soviet Union and lead the way back to independent life were the Baltic States — Estonia, Latvia and Lithuania — all of which had been annexed at bayonet point by the Soviet Union in 1940.

Stamps of old and new Latvia are shown in Figure 2: the 5-kapeikas Coat of Arms definitive, Scott 1; and the 30-santimu World Stamp Day commemorative, Scott 474, which includes the earlier stamp in its stamp-on-stamp design.

Yugoslavia had its beginning as the Kingdom of Serbs, Croats and Slovenes, founded in 1918. In 1929 the name of the Kingdom was changed to Yugoslavia (the land of the Southern Slavs). The union was never a happy one, and with the collapse of European communism, Yugoslavia began to break apart at the seams along ethnic lines in a bloody civil war that began in 1991.

Slovenia, ethnically the most homogenous of the nations comprised in Yugoslavia, was the first to successfully assert its independence. Slovenia issued regional stamps during its first three years in the old kingdom. One of these, a 5-filler green Chain Breaker stamp, symbolic of freedom, Yugoslavia Scott 3L2, is shown beside a modern 60-tolar Skeleton of Death Lying with Bride, Scott 229 in Figure 3. The Slovenian stamp commemorates the 50th anniversary of Allied liberation of the Nazi concentration camps.

Croatia's separation from Yugoslavia was much more difficult and bloody. There were large pockets of ethnic-Serb population in Croatia, especially around Knin. The nationalist-communist dictator of Yugoslavia, Slobodon Milosevic, on trial at the Hague for war crimes since February, fought hard to keep Croatia in the federation.

Croatia issued regional stamps as part of the kingdom during 1918-20, and it issued its own stamps during 1941-45 as a purportedly independent fascist puppet state of Nazi Germany.

Croatia was the birthplace of the necktie, and the English word "cravat" comes from the Croatian name for the country, Hrvatska.

The savage fighting as Bosnia and Herzegovina withdrew from Yugoslavia almost made the war in Croatia look civilized by comparison.

Few nations have as checkered a postal history as Bosnia and Herzegovina. Its stamps are listed in three different places in the Scott Standard Postage Stamp Catalogue using five different numbering sequences.

Stamps issued for the country as a province of the Austro-Hungarian Empire are listed in Vol. 1 under Bosnia and Herzegovina. Immediately following that listing in Vol. 1 is a different country listing also called Bosnia and Herzegovina. Under this heading the postage stamp issues of three different postal administrations are listed, all with separate numbering: the national government, the Croat Administration and the Bosnian Serb Republic.

Czechoslovakia, birthed in 1918 from the ruins of the Austro-Hungarian empire, came to an end in 1993. The Czechs and Slovaks parted company amicably in the liberal spirit of tolerance that seems to mark the Czech character.

Slovakia's previous incarnation as an independent state was as a fascist puppet under Nazi Germany during 1939-45. An old 4-koruna Woodcutter stamp of Slovakia, Scott 41, is shown in Figure 6 alongside a new 4k Easter stamp, Scott 353.

Eritrea, located on the Horn of Africa, had its first incarnation as a stamp-issuing entity as an Italian colony from 1892 to 1936, at which time it was subsumed into Italian East Africa.

After World War II, Eritrea nominally remained an Italian colony until it was assigned to Ethiopia in 1951 as an autonomous province by a United Nations commission. Predominantly Christian Ethiopia annexed predominantly Muslim Eritrea outright in 1962, resulting in one of Africa's longest and bloodiest civil wars.

By 1991 Eritrean rebels had liberated most of the country and had began to issue postage stamps. Eritrea was recognized internationally as an independent nation after the people voted overwhelmingly for independence in a referendum in 1993.

Stamps of old and new Eritrea are shown in Figure 7: a 5-centesimo Postman stamp, Scott 120, on the left; and a 10-cent Cunama Traditional Hair Style stamp, Scott 311, on the right.

Timor was a Portuguese colony on the eastern half of the island of Timor in the Malay archipelago. In 1885, stamps of Macau were overprinted "TIMOR" to produce the first stamps for the colony.

May 3, 1976, Indonesia invaded Timor and annexed it. Portugal, in the throes of democratic revolution and decolonization, was unable or unwilling to effectively resist the invasion. The Timorese (Christian ethnic Malays) resisted and suffered considerable oppression from the predominantly Muslim ethnic Javanese Indonesians.

In 2000, as Indonesia shuddered through political and economic crises, Timor struggled back to life with United Nations intervention. Figure 8 shows old and new stamps of Timor: a 50-avo Timor Woman stamp, Scott 257, above a nondenominated (10c) Symbolic of Freedom stamp, Scott 350, below.

Moldavia, a forerunner of Romania, issued its first stamp in 1858 (Moldavian stamps are listed under Romania in the Scott catalog).

Moldavia ceased to exist as a separate entity when it joined with Wallachia in 1862. In 1865 Moldavia-Walachia joined with part of Transylvania to form Romania.

As part of the notorious Molotov-Ribbentrop Pact, which preceded World War II, Romania was forced to cede to the Soviet Union that part of Moldavia east of the Prut River, called Bessarabia. From this and some Ukrainian territory east of the Dneister River, Stalin created the Moldavian Socialist Republic, one of the constituent republics of the USSR.

With the collapse of the Soviet Union, Moldavia rejoined the land of the living as Moldova, issuing its first stamps in 130 years in 1992. The 54-parale Coat of Arms stamp of Moldavia, Romania Scott 2, is shown above a modern 25-bani Vara Regional Costume stamp, Moldova Scott 293, in Figure 9.

Other presently dead countries that might return from the dead in our lifetimes include Biafra, Katanga, Karelia, Kurdistan, Montenegro, Serbia and Tibet.