Figure 6. United States special delivery stamps, such as this 10¢ issue of 1885, Scott E1, were used by mailers to ensure prompt mail delivery.

Figure 5. This German semipostal stamp was issued in 1995 to help raise funds for a youth stamp collecting charity, indicated by the surtax amount shown as "+50."

Figure 4. Postage due stamps from Denmark (left) bear the word "PORTO." Most postage dues from Great Britain (right) are marked "TO PAY," though some say "POSTAGE DUE."

Figure 3. Official stamps from India (left) and some other countries include the word "SERVICE." Recent Official issues of the United States (right) are inscribed "Official Mail."

Figure 2. The design of this 1933 Greek airmail stamp, Scott C8, includes an aviator and the front of his airplane. 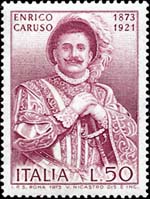 Figure 1. Italy issued a 50-lira stamp honoring singer Enrico Caruso in 1973. The stamp is listed in the Scott Standard Postage Stamp Catalogue among Italy's regular issues as Scott 1137.
Previous
Next

The many postage stamps of the world fit into different classifications, depending upon the specific postage needs they are intended to fulfill.

Stamps for regular postage usually have no special designation inscribed upon them, and they may be used alone or in combination with other stamps to pay postage fees.

Figure 1 shows a 50-lira regular postage stamp issued by Italy in 1973 to honor opera singer Enrico Caruso. In the Scott Standard Postage Stamp Catalogue, the stamp in Figure 1 is assigned the catalog number 1137, so a stamp collector may describe it as Italy Scott 1137.

Anyone who uses the Scott stamp catalog can open to the Italy listings, look for the stamp identified as 1137, and find a description and illustration for the Caruso stamp shown in Figure 1.

The listings for each country in the Scott catalog begin with stamps classified as regular postage. Like the 50-lira Caruso stamp, they are identified with a simple number, or less frequently, a number followed by a capital letter.

The listings for regular postage stamps usually begin with the number 1 for the earliest issue and continue numerically to include the most recent stamps issued before the catalog was published. Of course, there are exceptions to this rule. For example, the very first stamps of the kingdom of Italy begin with Scott 17.

Long ago it was decided that the numbering of Italy's stamps should begin with 17 so that they could follow the 15 stamps of the kingdom of Sardinia, which preceded the 1861 establishment of the Italian kingdom. The stamps of Sardinia are now listed separately under the heading of Italian States.

Within any given country section of the Scott catalog, there are often other classifications of stamps following the listings for the regular postage stamps. The most common of these special stamp classifications, according to the Scott catalog, are airmail, military, newspaper, occupation, Official, parcel post, postage due, postal tax, semipostal, special delivery and war tax.

Because these classifications appear following the regular stamp listings in the Scott catalog, they are known as back-of-the-book stamps, sometimes abbreviated BOB. A BOB stamp usually can be identified by inscribed or overprinted wording that indicates the special rate, fee or purpose it is intended to fulfill.

Some countries still issue many stamps with special classifications. Semipostal stamps are regularly issued by Germany, Belgium, the Netherlands and many other countries. Occupation stamps and war tax stamps, however, rarely or never appear today.

Airmail (Scott prefix C): Airmail stamps pay specific rates for mail carried by airplane, either from one location in a country to a destination in the same country, or from one country to a different country. The designs of airmail stamps often feature aviation themes or show some symbolic figure of flight.

The 50-lepton airmail stamp shown in Figure 2 was issued by Greece in 1933. It depicts an aviator and the front of an airplane. In the Scott catalog it is identified as Greece Scott C8.

Many, but not all, airmail stamps from English-speaking countries can be identified by the word "airmail" appearing as part of the design. Stamps from other nations use other words to identify their stamps, such as "Aereo" from Spanish-speaking lands, "Flugpost" or "Luftpost" from Germany, "Poste Aerienne" from France, and so on. The three small Greek words in the lower-left panel on the Figure 2 stamp indicate that it is intended for airmail.

Military (Scott prefix M): Many countries have issued stamps for use by their military personnel, usually when stationed in locations outside of the home country. Often, these military stamps are simply regular postage stamps overprinted to indicate their intended use by the military.

During World War II, for example, Italy issued regular definitive stamps overprinted "P.M." (for "Posta Militare") in black letters. Some countries, including Austria, China and Finland, have created military stamps that are of a different design than any of their regular issues.

In the United States, newspaper stamps were initially used in 1865 for postage prepayment. By 1875 the stamps were being used for accounting purposes.

Occupation (Scott prefix N): A nation whose armed forces occupy another nation may issue stamps for use in the occupied territory. In many cases this type of occupation occurred during or after the two World Wars. The issued stamps often are the stamps of the occupying nation, overprinted to indicate where the stamps are being used.

When Germany occupied the French regions of Alsace and Lorraine early in World War II, German definitive stamps picturing Paul von Hindenburg were overprinted with the names of the French regions for use as postage in the occupied territories. Those stamps are listed in the Scott catalog as France N27-58.

Parcel post (Scott prefix Q): The Universal Postal Union established international parcel post service in 1878 for the purpose of mailing parcels or merchandise. Individual countries have also developed domestic parcel post services, and many, including the United States, have created stamps specifically for parcel post use.

Postage due (Scott prefix J): Many countries have used postage due stamps to indicate that payment is required from the intended recipient of a letter because the sender did not apply enough postage.

Postal tax (Scott prefix RA): Some countries have raised money for government projects by instituting a postal tax. During specified periods, every piece of mail sent within the country has to pay the postal tax by using a special stamp created for that purpose, as an addition to the regular postage fees required for mailing.

Semipostal (Scott prefix B): A semipostal stamp (sometimes called a charity stamp) pays for postage and also collects funds for a specified charity or government project. Most semipostals show two denominations separated by a plus (+) sign. The first denomination indicates the postage fee, and the second tells how much is being donated to charity.

Semipostal stamp use is usually voluntary. Figure 5 shows a German 100 pfennig+50pf semipostal issued in 1995 to raise funds for the German Youth Stamp Foundation. The charity value of the stamp (in this case 50pf), is known as the surtax.

Special delivery (Scott prefix E): In the United States, special delivery service once provided for a mailed item to be delivered promptly to the addressee, even after the scheduled daily delivery for that customer had passed. Similar services were offered in other countries. The first U.S. special delivery stamp, Scott E1 from 1885, is shown in Figure 6.

There are many interesting stamps that actually combine two or more of the stamp classifications described here. In such cases, the Scott number letter prefix is a combination of the appropriate letters.