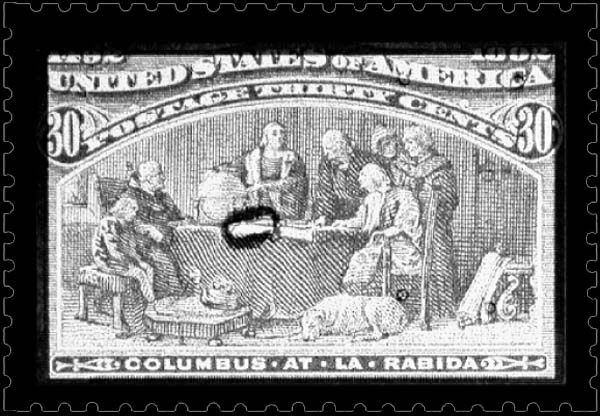 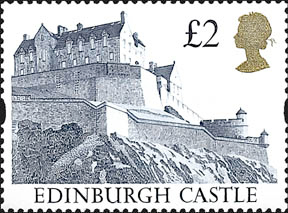 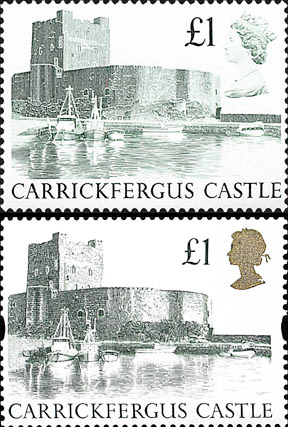 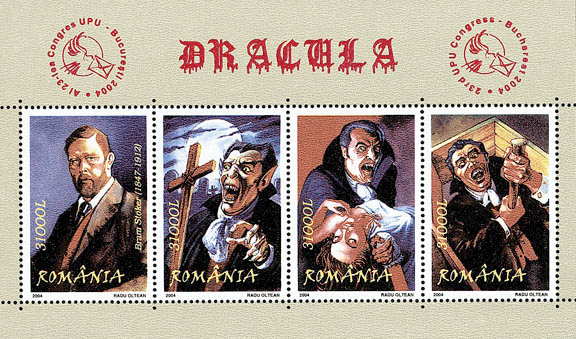 As Halloween approaches, we become more aware of spooky things.

A plethora of monster films are playing on television and at movie theaters. Bookshops pull out the scariest novels and display them so they jump at you as you walk in the door.

To escape the horror, you turn to your stamp albums for some nice, peaceful, safe recreation.

But beware: Your stamp albums are haunted.

Suddenly you hear a sound, something like a soft metallic clatter. You look around and then you slowly look down. Ah, it is nothing more than your stamp tongs sliding off your desk and onto the floor.

You chuckle at yourself, but then the phone rings and you jump. It is merely one of those annoying political calls asking for your vote. You are surprised you are so jumpy.

You go back to your collection and grab your album for Romania. It falls open effortlessly to a page containing a Romanian souvenir sheet (Scott 4638, Figure 1) showing author Bram Stoker and three different images of Dracula.

A chill runs up your spine and you start hearing spooky music.

You slam the Romanian album shut and grab the Great Britain album. How spooky can that be?

You begin to sort an accumulation of high denomination Castle stamps issued between 1988 and 1995. It is easy to tell the stamps issued in 1988 because they have an engraved portrait of Queen Elizabeth in the upper right or left corner, depending on the denomination.

The stamps issued between 1992 and 1995 have a silhouette of the queen in the same corners, but the silhouette changes eerily from gold to metallic green depending on how the stamp is turned. This kind of ink also can be found on some recent U.S. currency.

The 1992 £1 Carrickfergus Castle stamp with the metallic silhouette of the queen (Scott 1445) is shown at the bottom of Figure 2.

Just then you start looking more carefully at the £2 stamp that depicts Edinburgh Castle (Scott 1447, Figure 3). You find it disconcerting that the queen's head seems to change from gold to green and back again without apparent reason. The castle itself has taken on a brooding quality. You start to think it is haunted, and that spooky music begins playing again.

Suddenly your album pages are flipping on their own. When the pages stop you look down at the stamps and there is Dracula again, with red eyes and teeth bared, ready to strike from a 1997 26-penny British stamp (Scott 1754, Figure 4). What's worse is that he has his monstrous friends with him: Frankenstein on the 31p stamp, Dr. Jekyll and Mr. Hyde on the 37p, and the really scary, saliva-dripping Hound of the Baskervilles on the 43p stamp.

You put the Great Britain album back on the shelf. You hear something rattling. It's an album on the shelf below. There is a whoosh, then the album flies off the shelf, across the room and onto your desk, scattering hinges, mounts and a magnifying glass. Your tongs once again land on the floor with a clang.

The pages of the album slowly turn. You stand and stare as you see your favorite 19th century United States stamps go by. The page-turning picks up speed, as if possessed by a spirit, and then stops suddenly. You cautiously approach the album and look down. You momentarily lose your breath as you gaze upon the strip of five U.S. 44¢ Movie Monsters stamps (Scott 3172a, Figure 5): the Phantom of the Opera, Dracula, Frankenstein, the Mummy and the Wolf Man.

A flat piece of plastic moves across the stamps and eerie images of bats, masks and wolf heads begin appearing on the stamps, secret images placed on the stamps during production that require a special decoder to see them.

When the stamps first came out you thought this was a great idea. Now you are not so sure.

Your hands are beginning to shake a little. You start to reach for the album when suddenly the Wolf Man stamp begins to speak to you.

"Fellow stamp collector," Wolfie says before breaking into a howl, "my friends and I are tired of celebrating National Stamp Collecting Month stuck in albums."

Frankenstein begins to nod his head.

"We have a request of you," the Wolf Man continues. "We want to go to a stamp show. You will take us there."

You go off to find your keys.

When you return to your stamp room, the five monsters have become life size. Frankenstein's head nearly touches the ceiling, Dracula is drooling, the Phantom is playing air organ, the Mummy's wraps are unraveling all over the stamp room floor, and Wolfie is howling.

You join him with a scream, and you hear a buzzing in your head. Suddenly you are sitting straight up in bed yelling with the alarm clock buzzing the morning to a start as it does every weekday.

Before you start your breakfast, you check your stamp room to see if everything is as it should be.

You pull the U.S. album off the shelf and flip to the page containing the strip of five Movie Monster stamps and find a note stuck in that page that says, "BOO!"