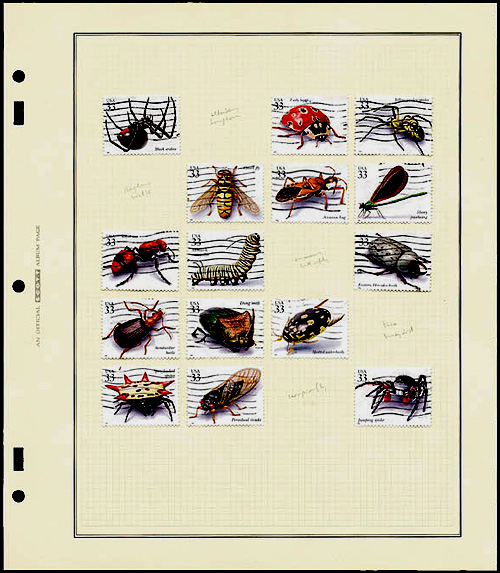 This blank page holds 15 of the 20 United States 33¢ Insects and Spiders stamps issued in 1999. Each is hinged in place. Penciled notes name the missing stamps.

Closer view of the Flora and Fauna stamps hinged to the page shown in Figure 2. These 10 stamps were issued in 2000. Note that five of the stamps are mounted sideways. 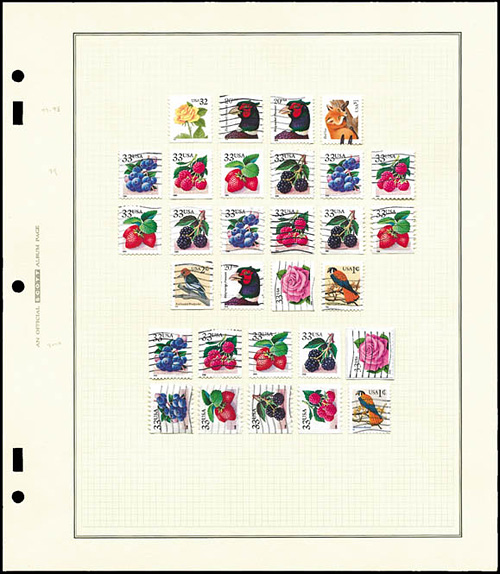 This blank page, with simple border, holes for a binder and a grid of quadrilled lines, holds the United States stamps in the Flora and Fauna series issued in 1997-2000. 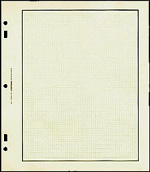 Blank stamp album page, with a light printing of a grid of small squares, called a quadrilled page.
Previous
Next

The blank page has a long tradition of evoking terror in the hearts of many stamp collectors. Most collectors use and prefer preprinted stamp album pages, such as the preprinted country or topic pages made by Davo, Lighthouse, Lindner, Minkus, Schaubek, Stanley Gibbons, Scott, White Ace and other firms.

Many album manufacturers also produce blank or nearly blank pages that match the pages of their country or topical albums. Figure 1 shows an example of a blank stamp album page. The picture shows the page greatly reduced in size. It actually measures 10 inches across by 11½ inches deep.Most collectors begin stamp collecting using a preprinted album containing an orderly arrangement of rectangular spaces in chronological order. The text printed on the pages conveniently names the stamps and often lists their catalog numbers.

It's not exactly blank. It bears the name of the maker, Scott, in the black legend "An Official Scott Album Page" printed along the left side, and it has a two-line black border.

This album page also bears what are called quadrilled (pronounced kwa-DRILLED) lines. These lines, lightly printed in blue, form a grid that is a guide for mounting stamps. Some pages have the lines printed in a greenish shade of blue instead of light blue.

The Figure 1 page and the other pages shown here are Scott border "B" pages that match the border used on pages in the Scott National album for United States stamps.

Figure 2 pictures one of these same pages with 30 U.S. stamps affixed. The stamps, hinged in place, are in the Flora and Fauna series and were issued in 1997-2000. The Figure 2 page is my album page, and my other Flora and Fauna stamps are hinged onto two similar pages.

The other stamps in the series were issued from 1990 to 1996, and there are forerunners (similarly appearing stamps) from a few years before. I use the pages for a basic stamp collection that serves as a real-stamp reference, a tool more powerful than the abstract listings in a catalog.

Blank or quadrilled pages are fun and easy to use, and they allow almost unlimited freedom in mounting. They also are inexpensive when compared to preprinted pages or pages with mounts or mounting strips already affixed.

The blank or quadrilled pages cost less, obviously, because the collector does the work (fun) of deciding on the arrangement of the stamps, not an album page editor or an artist hired by the publisher of the pages. Using the pages involves deciding on an arrangement and then finding the middle of the page. The quadrille grid makes this easy.

The stamps are laid out upside down and hinged. Most collectors will do the hinging using stamp tongs, and many also will use the tongs to hold the hinge when moistening it lightly (a light lick will do) and applying it to the stamp. It's also a good idea to use tongs to hold the hinged stamp, moisten its attached hinge and carefully mount it on the page.

Figure 3 shows a close-up of part of the Flora and Fauna page. The stamps are the four 33¢ Fruit Berries issued in a pane of 20 in March 2000. Each of these stamps has at least one straight edge and bears a small "2000" year date in the lower-left corner.

Next is a 33¢ Coral Pink Rose stamp, the one issued in a two-sided pane of 20 in April 2000. This on-paper stamp is mounted sideways, as are the four 33¢ Fruit Berries stamps in the next row, the four linerless coil stamps issued in June 2000.

The Coral Pink Rose stamp is still on-paper because it is not a good soaker. Last comes a 1¢ American Kestrel stamp, the stamp that appeared unannounced in October 2000.

Why are some of the stamps mounted sideways? Well, I'm not really sure, but I think it's because of those quadrilled lines. When I mounted these stamps a few Sundays ago, I must have thought that they would look good as a symmetrical group of 10, so that's how I mounted them, all square with the world and with themselves.

My friends seem to tolerate this quirky way I have of displaying some of my stamps, although a sideways glance sometimes greets the pages when I show them off.

Freedom to do what you want is the greatest benefit of using blank or quadrilled pages, and I like these stamps sideways. On some of my pages all the stamps are sideways because they fit better that way.

The Flora and Fauna page shown here bears a few pencil notations. So does the similar page shown in Figure 4, with 15 of the U.S. 33¢ Insects and Spiders stamps hinged into place in the order that they appear in the pane of 20.

Because the pages have no printed text, the few penciled notes briefly state the years of issue for the various stamp groupings. Catalog numbers might be added to identify the stamps further.

Penciled onto the Insects and Spiders page are the names of the creatures pictured on the stamps still missing from the set. These pencil marks will be covered up when the missing stamps are added.