Christmas customs and legends on stamps 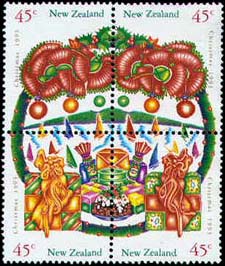 Figure 8. This se-tenant block of four New Zealand 45¢ Christmas stamps, Scott 1167a, shows many traditional holiday customs and traditions. How many can you find? Click on image to enlarge. 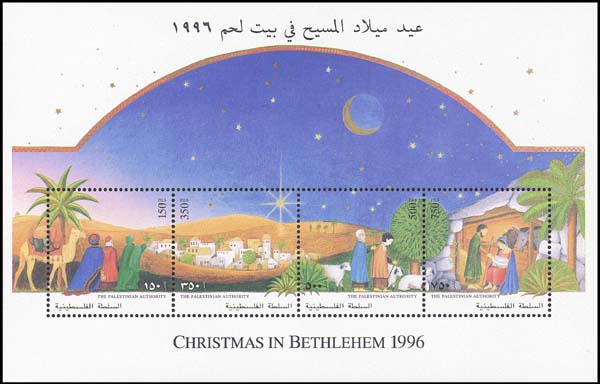 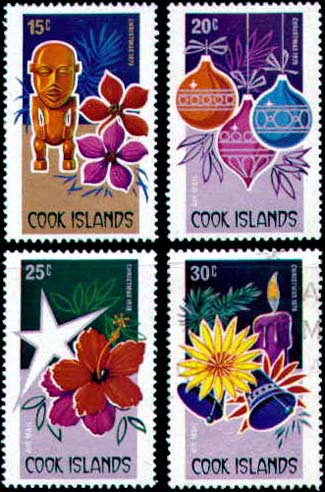 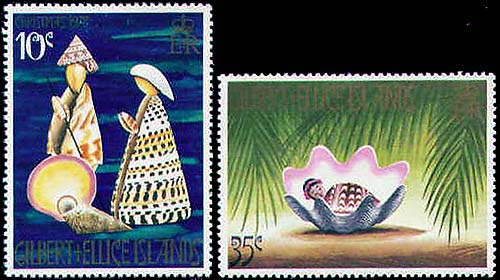 Figure 5. These Gilbert and Ellice Islands 10¢ and 35¢ Christmas stamps of 1972 show nativity scenes that are constructed from local seashells, Scott 204-05. Click on image to enlarge. 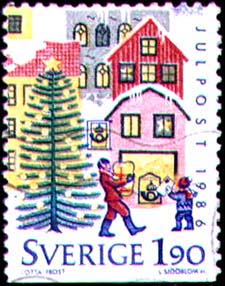 Figure 3. This Pitcairn Islands souvenir sheet, Scott 191a, shows how Pitcairners celebrate Christmas traditions as seen through the eyes of the island's children. Click on image to enlarge. 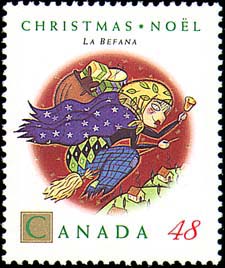 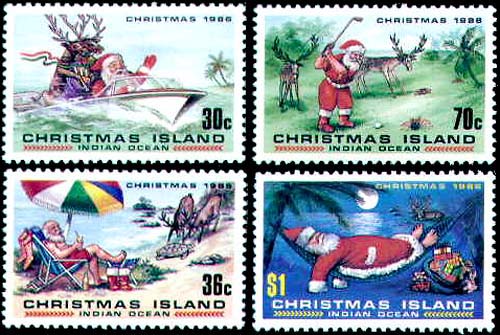 This time of year most people receive holiday mail brightened with a choice of secular and religious Christmas stamps. North America is the birthplace of the Christmas stamp. Canada's 2¢ Christmas stamp of 1898 picturing a map of the British Empire, Scott 85, is shown in Figure 1.

In some years, mailers in the United States, Canada and Mexico have inspired designs to choose from, but for the most part, the holiday stamps are more functional than they are beautiful.

Some of the most interesting Christmas stamps are those that depict holiday celebrations in far-flung places. Looking at them is a great way to learn about Christmas customs of other lands.

La Befana, the Christmas witch, is a tradition in Italy. Usually depicted as an aged woman, she visits all the children of Italy on the night of Jan. 5.

The next morning, on the Feast of the Epiphany, children who have been good awake to find that she has left sweet, curly candy for them. Children who were bad awaken to a lump of coal.

The Pitcairn Islands 1979 souvenir sheet, Scott 191a, pictured in Figure 3 shows a compilation of several island children's renditions of how Christmas is celebrated in Pitcairn.

The 6¢ value shows Christmas presents being brought to the village square. The gifts are hung on Christmas trees (shown on the 9¢ stamp). The 20¢ stamp shows how the present-decorated trees are admired throughout the day and then at sunset the gifts are taken down and distributed. The 35¢ stamp shows the island residents returning home with their gifts.

This celebration of the holiday season involves the entire population of Pitcairn, an easy enough feat to accomplish, because the total population today is fewer than 50.

Another village scene unfolds at the opposite end of the earth on the 1986 Swedish stamp illustrated in Figure 4, Scott 1617. The snowy scene shows boot-clad villagers taking presents to the post office to mail.

Some stamps show holiday motifs with a local interpretation, such as the Gilbert and Ellice Islands 10¢ and 35¢ 1972 Christmas stamps illustrated in Figure 5, Scott 204-05. The stamps picture nativity scenes constructed from seashells that are found in local waters.

The Cook Islands released an interesting series for Christmas 1979 showing island arts and crafts and traditional Christmas decorations in combination with a floral motif.

The high value from the set of four, the 15¢ Ancestral Statue With Flowers stamp, Scott 540, is shown in Figure 6.

Because Cook Islands is in the southern hemisphere, Christmas and December occur there in summer, and the islands are even more abundantly abloom than the usual tropical climate allows.

What could be more appropriate for Christmas than the view of Bethlehem pictured on the 350-fil Palestinian Authority stamp shown in Figure 7, Scott 60b? The stamp is from a souvenir sheet of four.

The New Zealand block of four se-tenant 45¢ Christmas stamps shown in Figure 8 was issued in 1993.

The block shows the necessary accouterments for enjoying a Christmas celebration in New Zealand, where Christmas is a summertime holiday.

Presents flank a holiday plum pudding and trinket-filled Christmas crackers. In the background are the colorful sails of yachts, a pastime that might be enjoyed along with a day at the beach on Christmas Day in New Zealand.

One of the most popular legends of Christmas is Santa Claus.

Santa and his elves work tirelessly throughout the year making toys for good boys and girls, and then (as the legend goes) Santa delivers the goodies to the deserving on Christmas Eve.

He works all night long, stopping at every house on his reindeer-powered sleigh, an ordeal that must exhaust poor old Santa.

Christmas Island, located in the Indian Ocean and also in the southern hemisphere, issued a set of five stamps in 1986, Scott 189-93, that show Santa relaxing in the local environment. Four of the stamps are shown in Figure 10.

The 30¢ value shows Santa and two of his reindeer cruising in a speedboat, which seems like more excitement than he might wish to pursue after his trek.

The 36¢ stamp illustrates a more sedentary Santa relaxing on the beach with a cool drink while the reindeer examine a sea turtle.

A golfing Santa is shown on the 70¢ stamp, but the most endearing scene is on the $1 stamp, with Santa snoozing soundly in a beach hammock while the palm trees sway gently overhead.

Collecting Christmas stamps is a perfect way to extend the holiday spirit throughout the year.

Joining the Christmas Philatelic Club is a smart way to enhance enjoyment of Christmas stamps and related items.

The club publishes a six-times-a-year journal called Yule Log. It has its annual convention at various stamp shows.

It doesn't matter what time of year it happens to be. If the club is convening, the members have a wonderful Christmas party complete with Christmas gifts and often a visit from Santa.

The value of membership in the club easily outweighs the expense of the modest annual dues.