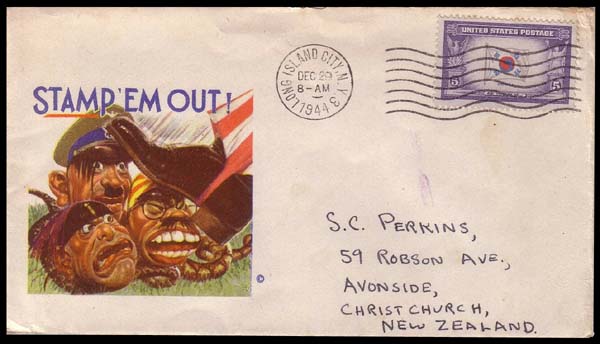 Figure 7. A WWII patriotic cover depicting the three Axis leaders as snakes being stamped on by Uncle Sam's foot. Click on image to enlarge. 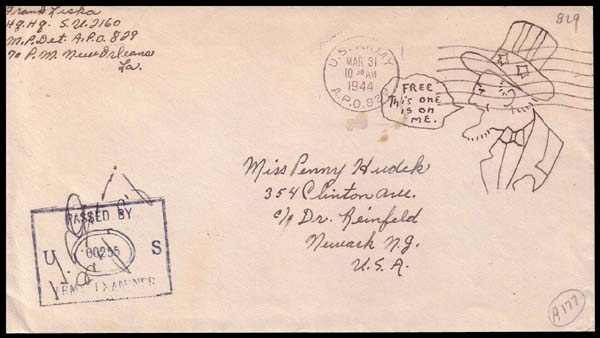 Figure 6. An example of WWII soldiers' mail, from the Panama Canal Zone. The sender provided a hand-drawn cartoon of Uncle Sam saying, "Free. This one is on me." Click on image to enlarge. 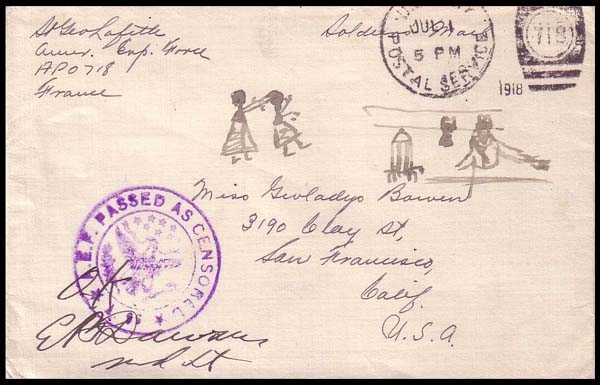 Figure 5. The hand-drawn illustrations on this World War I American Expeditionary Force cover could be a puzzle. Click on image to enlarge. 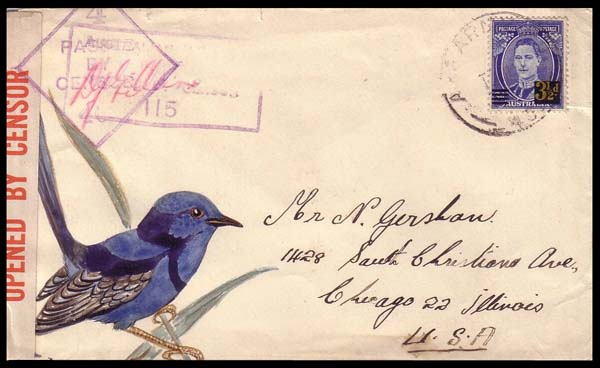 Figure 4. The hand-drawn and hand-painted bird on this Australian illustrated cover from World War II is partially obscured by the censor tape and related handstamps. Click on image to enlarge. 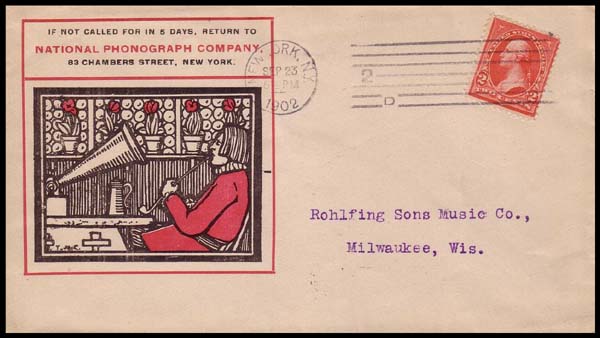 Figure 3. An advertising cover from the National Phonograph Company. It was mailed from New York City in 1902. Click on image to enlarge. 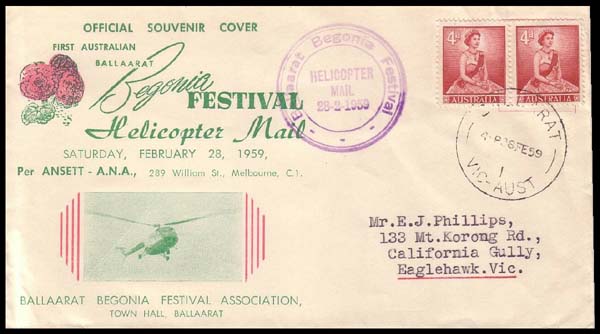 Figure 2. A 1959 Australian cacheted event cover for the Ballaarat Begonia Festival and its helicopter mail. Click on image to enlarge. 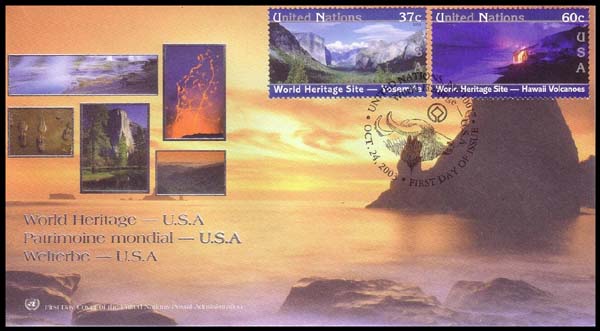 Illustrated mail is a broad collecting category that is dominated by cacheted first-day covers. These are covers bearing a stamp postmarked on the day it was issued and some sort of an illustration that relates to the stamp subject.

FDC collecting, shunned by some, is in fact a surprisingly technical and multifaceted collecting specialty.

Some FDC collectors specialize in a particular cachetmaker, stamp, time period or country. Others might collect by topic or theme.

Nearly all who collect FDCs do so because the covers represent the birth of a new stamp, and they are intrinsically beautiful. An interesting and challenging collection could be formed of first cachets for each cachetmaker.

FDC collectors are well served by the American First Day Cover Society. For more information, write to the society at Box 65960, Tucson, AZ 85728, or visit the web site at www.AFDCS.org.

Besides cacheted covers, some collectors of FDCs also collect post office announcements, preliminary artwork and covers bearing autographs of people related to the subject of the new stamp.

First-day ceremony programs are highly collectible. In recent years, the U.S. Postal Service has used generic programs and even more recently it has been using covers with program inserts.

In days gone by, ceremony programs issued by the Postal Service were more elaborate, with designs created specifically for the subject being honored. Some were die-cut and cleverly designed.

Event covers are another dominating presence on the illustrated mail scene. Figure 2 depicts an incongruous pairing of Australian events of 1959 — the Ballaarat Begonia Festival and helicopter mail. The cover was flown on a helicopter, as both the printed cachet and the "Helicopter Mail" handstamp attest.

Illustrated covers and complementary postmarks have been used for all manner of events. They include exhibitions; airport dedications; bridge openings; anniversaries of people, places, or events; festivals and fairs; and a host of other events ranging from the notable to the obscure.

FDCs and event covers are the best-known branches of the illustrated mail field, but others are equally intriguing.

Businesses have long realized that an eye-catching illustration on an envelope will compel the recipient to open and investigate the contents. Even today colorful advertising peppers our daily mail.

Someday these contemporary mailpieces will become period collectibles that reflect life as it was in the early 21st century. For now most of us probably think it is junk mail. Today's trash will definitely be tomorrow's treasure.

Figure 3 shows an advertising cover from the National Phonograph Co., mailed from New York City in 1902. This cover beautifully exemplifies the period from which it emanated. The cachet shows one of those newfangled phonographs with its huge hornlike amplifier, and the illustration itself, in the distinctive arts and crafts style, was trendy and avant-garde for the time.

Illustrated advertising covers make useful additions to topical collections. The Figure 3 example could be effectively added to a collection of phonographs and sound recording devices, smoking and pipes (the man in the cachet is smoking), or arts-and-crafts-style art, which is the reason I acquired it.

It matters not where your interests lie. There are probably advertising covers from the 19th, 20th or 21st centuries that would complement those interests. Farm implements, animals, flowers, books, food, clocks, hotels, trains, automobiles and toys are just a few of the subjects that have appeared on advertising covers. If a product exists, no matter how esoteric, it can probably be found on an advertising cover.

Stationers remain in business because they know that people like to express their personalities in their letterhead, envelopes and note cards. Most letterhead designs, however, are not custom-made, unless a customer wants it so. Whether custom-made or mass-produced, all stationery is collectible, but hand-drawn and painted stationery is more appealing.

Some designs can be quite elaborate, such as the cover sent from Australia during World War II, shown in Figure 4. The blue bird is hand-drawn and hand-painted with great skill and care. The pretty bird is a form of folk art. It is almost a pity that two censorship handstamps and resealing tape partially obscure the design, but these too are signs of the time.

The cover shown in Figure 5 bears illustrations that are more cryptic. It almost looks like a puzzle, sent from a soldier serving in France with the American Expeditionary Force.

The ink drawing is open to interpretation. I think it looks like two little girls, one of which is pulling a pigtail of the other, along with a second drawing that might be a rocket and a soldier signaling with a flag. But who knows?

During both world wars, military personnel could send surface letters for free. Often these letters would be inscribed "Soldiers' Mail" such as the cover illustrated in Figure 5, or simply "Free." The sender of the cover shown in Figure 6 was a bit more creative and drew a cartoon portrait of Uncle Sam saying "Free. This one is on me." The letter was sent from APO 820, which was located at Fort William D. Davis in the Panama Canal Zone.

Many collectors like to exercise their creativity by producing original designs on covers. The Art Cover Exchange Society provides services for such creative collectors. For more information, write to Joseph Doles, 105 Lawson Road, Rochester, NY 14616 or visit the web site at www.artcoverexchange.org.

Patriotic covers are yet another branch of illustrated mail. They can be collected by time period, conflict, subject matter, cachet designer or printer. The American Civil War generated multitudes of patriotic covers from both the North and the South. Some of the caricatures were vicious and certainly not what would be acceptable in today's politically correct atmosphere.

Popular subjects for patriotic covers during times of war are flags and cartoons that depict the enemy in an unfavorable light. Figure 7 incorporates both flags and cartoons in a multicolor lithographed cachet produced by stamp dealer Jacques Minkus. The illustration shows caricatures of the heads Hitler, Mussolini and Tojo with snake bodies. They are about to be trod on by Uncle Sam. The cover is franked with the 5¢ Korea stamp (Scott 921).

Illustrated mail can be a fascinating specialty or a fun secondary collection. The covers have artwork that is sometimes cryptic, sometimes incongruous, sometimes beautiful and sometimes offensive, but it is always historically interesting. Give collecting illustrated mail a try.