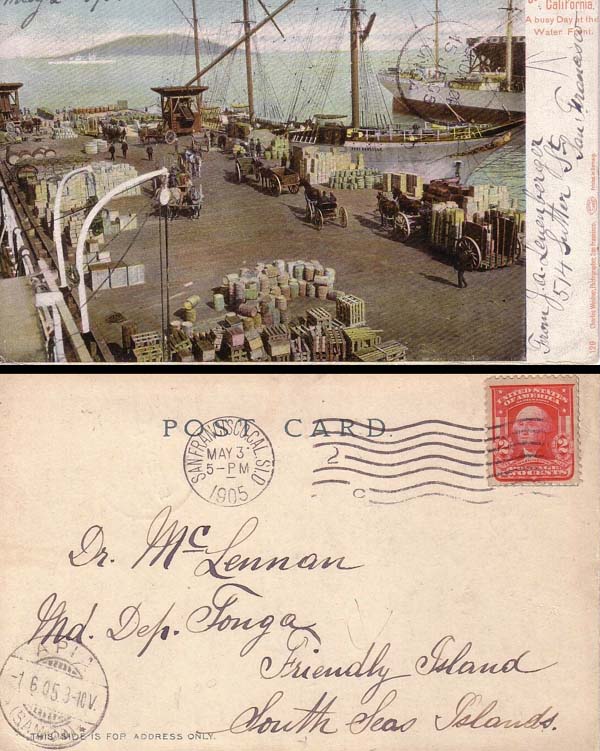 Figure 4. The picture and address sides of a San Francisco picture postcard. The postcard was mailed to Nukualofa, Tonga, on May 3, 1905 and received there on June 15, 1905. Click on image to enlarge. 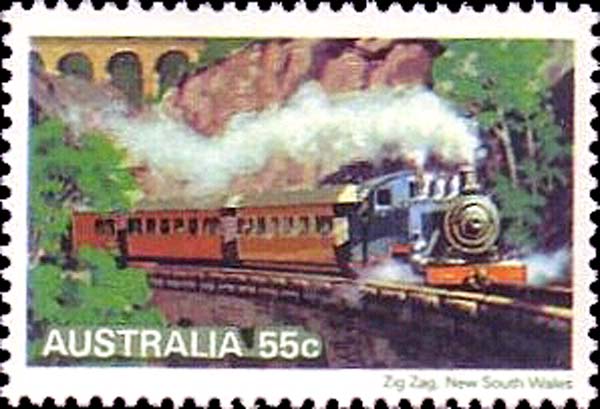 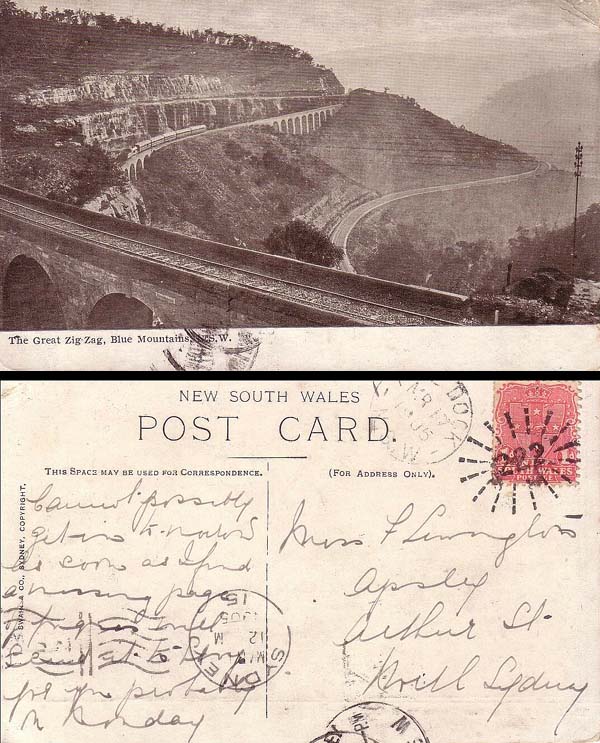 Figure 2. The picture side and address side of a Great Zig Zag Railroad picture postcard. The postcard was mailed in 1905 from Five Dock, a suburb of Sydney, Australia. Click on image to enlarge. 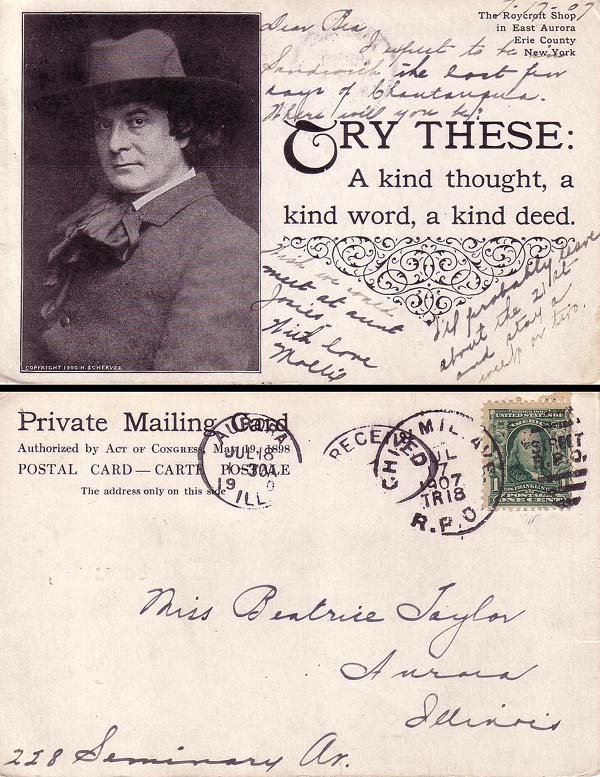 Figure 1. The picture side and the address side of a Roycroft picture postcard. The postcard was postmarked on July 17, 1907, aboard a Chicago streetcar railway post office. Click on image to enlarge.
Previous
Next

Many stamp collectors also collect picture post-cards. I think that those who don't collect postcards are missing a lot.

I've written before about my interest in the Roycrofters community of craftsmen that flourished around the turn of the 20th century and its founder, Elbert Hubbard.

I collect picture postcards of the Roycrofters. Sometimes I acquire unused postcards, other times I get postcards that have been mailed. Being a stamp collector, I like the mailed ones best.

Most often a used Roycroft postcard will bear an East Aurora, N.Y., postmark, because that is where the Roycroft community is located.

Sometimes a Roycroft postcard will have been postmarked at a nearby town. Occasionally a postcard will bear a postmark that has no connection to the subject on the card.

Such is the case of the Roycroft postcard, both sides of which are shown in Figure 1. I acquired the postcard recently in an online auction. There on the card was my hero Elbert Hubbard with one of his epigrams.

The sender wrote the message in the white space on the picture side of the postcard, because the card dates from the time before postcards had divided backs (address sides), with a space for a message next to the address.

From that description, I had expected an East Aurora postmark, but I was in for a pleasant and unexpected surprise. When my purchase arrived, I did what every stamp collector would do. I flipped it over to see the stamp and postmark, shown in Figure 1 below the picture side.

The stamp was not very exciting: a United States 1903 1¢ green Benjamin Franklin stamp (Scott 300). There was a postal marking from Aurora, as I expected, but it was not East Aurora, N.Y. It was a receiving mark of Aurora, Ill., dated July 18, 1907. The postmark and cancel duplex that ties the stamp to the postcard is quite interesting. It reads "CHI & MIL. AVE. R.P.O." and is dated July 17, 1907. The barred oval killer cancel reads "STREET R.P.O." between the bars.

What does all this mean? It means that this postcard was serviced by a streetcar railway post office in Chicago in 1907.

A streetcar railway post office was a special type of streetcar that accepted mail and sorted and postmarked it as it traveled the line, so the mail was ready for delivery when the streetcar arrived at the post office. The first streetcar RPO operated in St. Louis in 1891. Streetcar RPOs were later introduced in Boston; Chicago; Philadelphia; New York City; Cincinnati; Washington, D.C.; San Francisco; Rochester; Pittsburgh; Seattle; Chattanooga; Cleveland; and Baltimore.

Streetcar RPOs operated from 1891 until the 1920s. You can get a brief history of streetcar RPO service and see a video clip about it by visiting the web site of the National Postal Museum atwww.postalmuseum.si.edu/exhibits/2b1c4_streetcar.html.

The postmarks on the postcard made a nice bonus, and it was not the first time that I bought a picture postcard for its picture and ended up with a philatelic prize.

The picture side of the postcard shown front and back in Figure 2 depicts one of the most interesting stretches of railroad in Australia, called "The Great Zig Zag Railroad."

This railroad is commemorated on the Australian 55¢ stamp (Scott 710) shown in Figure 3, which was issued in 1979.

I acquired the Great Zig Zag Railroad postcard for its picture side. I thought it would look nice mounted in my album with the stamp.

The Great Zig Zag Railroad was built during 1866-69. It was laid out in the shape of a "Z" so that trains could negotiate a very steep, rocky grade in Australia's Blue Mountains.

The Great Zig Zag Railroad operated between 1870 and 1910, when it was replaced by the Ten-Tunnel Deviation project.

My picture postcard shows the complications of the switchbacks and the complexity of the engineering required for its construction.

I was pleased to find it but was even more pleased to flip the postcard over to the address side (shown in Figure 2 below the picture side) to find three different 1905 postmarks and fragments of two others. There is a Sydney machine cancel, a Five Dock circular datestamp and a "222" rayed sunburst cancel, which is also a Five Dock postmark.

Five Dock, a western suburb of Sydney, is one of those odd Australian place names that makes you wonder how it came to be named. It dates to the first settlement of the area, when settlers thought natural indentations along the Parametta River looked like docks.

The picture side of the postcard shown front and back in Figure 4 sports a wonderful turn-of-the-20th-century scene of a busy dock in San Francisco with sailing ships, crates full of cargo, and horse-drawn drays and buggies.

The lightly impressed receiving postmark on the picture side of the card at the top right really got my attention.

It reads "NUKUALOFA 15 JE 05 TONGA." Nukualofa, Tonga, is a scarce mail destination on an island in the Pacific Ocean. I could hardly wait to see the address side of the post card, shown in Figure 4 below the picture side, which revealed that it had been sent May 3, 1905, from San Francisco.

There is a transit marking from Apia, Samoa, in the form of a German bridge type postmark dated June 1, 1905.

The postmark and the Nukualofa receiving mark on the picture side of the postcard show that it traveled from San Francisco to Tonga in just under six weeks. If you have been shunning picture postcards, it might be time you took a closer look. Some great postal history lies waiting to be discovered.