Collecting the U.S. Constitution on U.S. and worldwide stamps 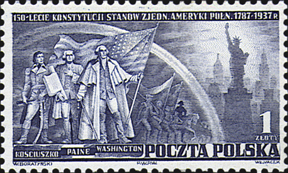 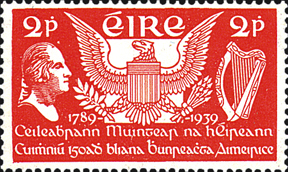 Figure 8. Ireland Scott 103 is a 2-penny stamp showing George Washington, an eagle and a harp. 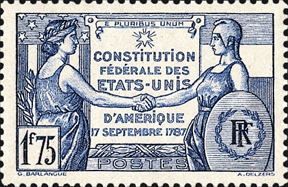 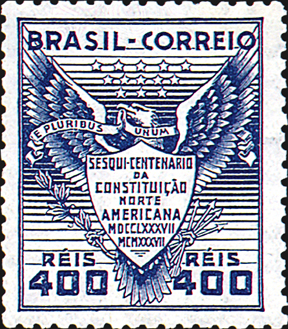 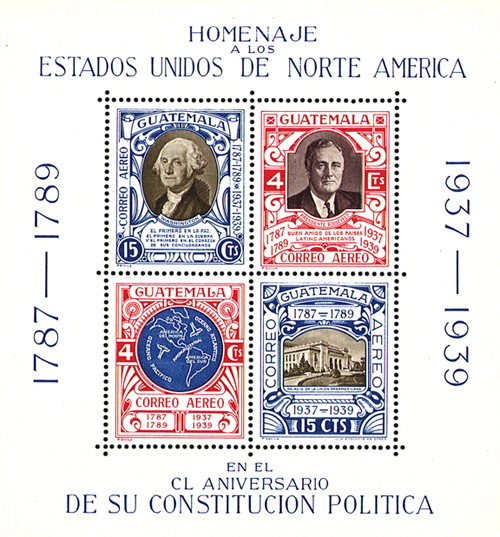 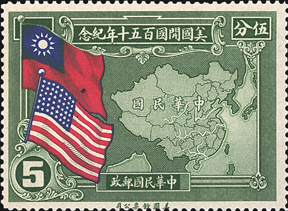 Figure 4. China Scott 364 features Chinese and U.S. flags with a map of China. 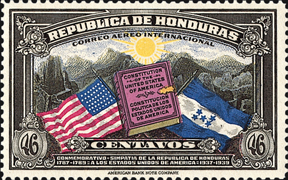 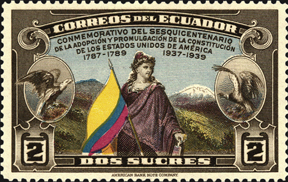 Figure 2. Ecuador Scott 366, the 2-centavo Liberty Carrying the Flag of Ecuador stamp of 1938. 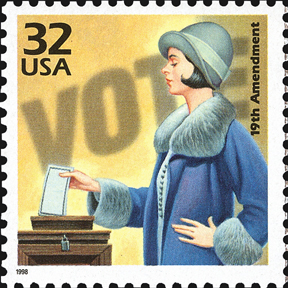 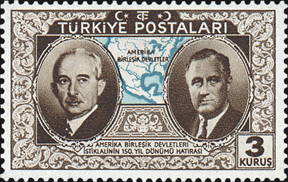 In 1938 the United States Constitution celebrated its 150th birthday. This iconic, living document serves us well even 225 years after its ratification in 1788.

Hearkening back to 1938, the U.S. Post Office Department issued a 3¢ stamp (Figure 1) in honor of the anniversary.

The stamp shows the familiar image of our Founding Fathers signing the completed Constitution.

The United States was not the only nation to mark the 150th anniversary celebration with one or more postage stamps. In fact, several other countries produced magnificent multicolored stamps, a method of stamp production that was not commonplace in the 1930s.

Ecuador was particularly enthusiastic, issuing seven regular postage stamps and seven airmail stamps in 1938. Figure 2 shows the 2-centavo Liberty Carrying the Flag of Ecuador stamp produced by a combination of recess printing and lithography. The airmail issues in the set show the American bald eagle with spread wings grasping a U.S. flag and an Ecuadorian flag. The stamps were beautifully and brilliantly printed by the American Bank Note Co.

Honduras issued a similar tribute to the U.S. Constitution in 1937 that was also printed by the American Bank Note Company (Figure 3). The 46c airmail stamp shows a bound book flanked by a U.S. flag and the flag of Honduras.

China, too, issued spectacular stamps showing the U.S. flag and other patriotic symbols in 1939, in celebration of the 150th anniversary of when the U.S. Constitution went into effect (March 1879). Figure 4 shows the 5¢ denomination with waving Chinese and American flags in front of a map of China. These stamps, too, were multicolored and printed by American Bank Note Co.

Brazil's 1937 tribute was less colorful but still maintained a patriotic theme, with an eagle and shield inscribed to mark the sesquicentennial of the U.S. Constitution (Figure 6).

France took an entirely different design path in 1937 with allegorical representations of the United States and France shaking hands against a backdrop of a banner honoring the U.S. Constitution anniversary (Figure 7).

Ireland celebrated the U.S. Constitution in the early days of its own independence. Two stamps were issued in 1939, each showing George Washington, the eagle from the Great Seal, and an Irish harp (Figure 8).

Poland issued a very interesting stamp in 1938 that reflects the Art Deco movement of the time (Figure 9). The 1-zloty stamp shows Tadeusz Kosciuszko, Thomas Paine and George Washington with a view of New York City.

Kosciuszko was Polish and a brevet general in the American Continental Army. He managed the construction of the garrisons at West Point, N.Y., and returned to Poland in 1784.

In total, 14 nations besides the United States issued postage stamps to mark the 150th anniversary of the U.S. Constitution between 1937 and 1939. Each stamp is a snapshot in time that offers a glimpse of what these countries felt about the United States. The 14 countries are Brazil, China, Dominican Republic, Ecuador, France, Guatemala, Haiti, Honduras, Ireland, Nicaragua, Panama, Poland, Spain and Turkey. There might be others.

The Constitution is an admirable subject to study using postage stamps. Stamps can be found that address the three separate branches of U.S. government. The first 10 amendments of the Constitution, known collectively as the Bill of Rights, have been recognized on stamps as well. Many of the amendments that followed also have been featured on commemorative stamps, such as the 19th Amendment that gave women the right to vote, which is the subject of United States Scott 3184e, a 1998 stamp from the Celebrate the Century series (Figure 11).

This is a great project for a family to undertake. The stamps help the history "sink in," plus everyone learns something and has fun in the process.