Condition enhances or detracts from value 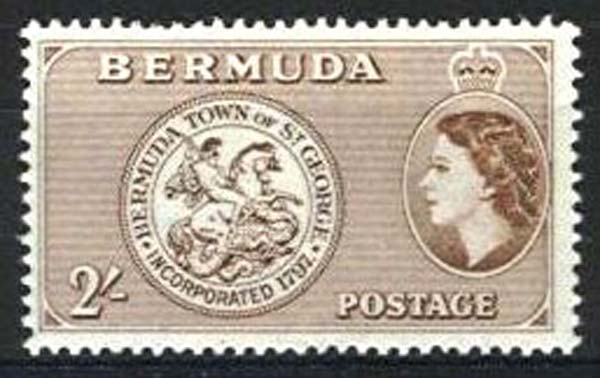 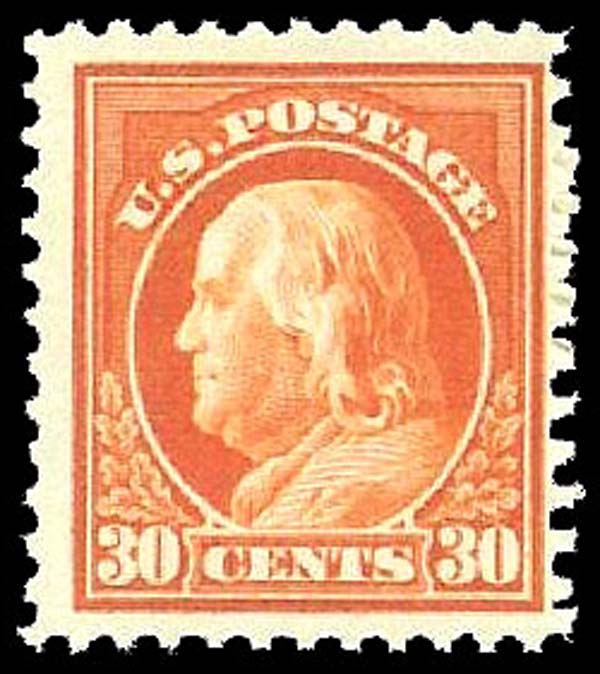 Figure 8. A U.S. 30¢ orange-red Benjamin Franklin stamp (Scott 516) with blind perforations at the right edge. Click on image to enlarge. 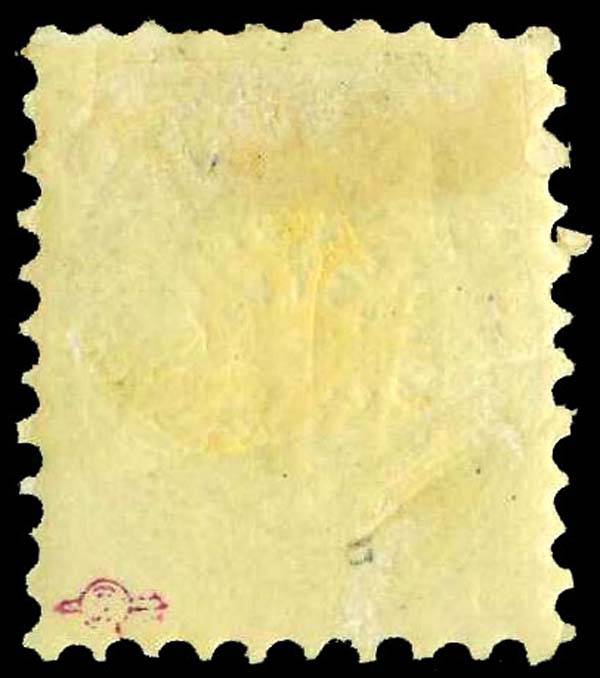 Figure 7. The back of a Lombardi-Venetia 3-soldus green Imperial Crest stamp (Scott 21). There is an expert's mark stamped in purple ink at the lower left of the stamp. Click on image to enlarge. 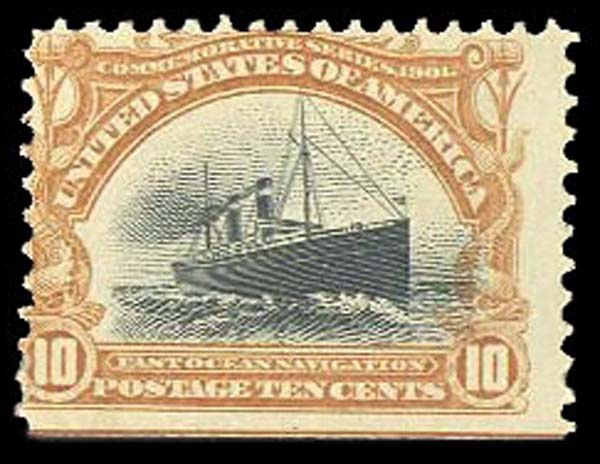 Figure 6. A U.S. 10¢ yellow-brown and black Fast Ocean Navigation stamp (Scott 299) with a straightedge at bottom. Click on image to enlarge. 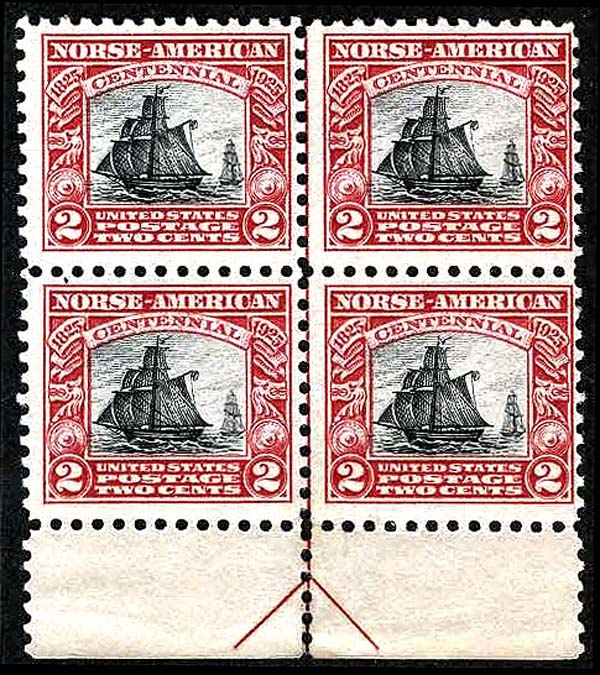 Figure 5. An arrow block of four of the United States 2¢ Sloop Restorationen stamp (Scott 620), a type of position piece. Such position blocks can bring a price premium. Click on image to enlarge. 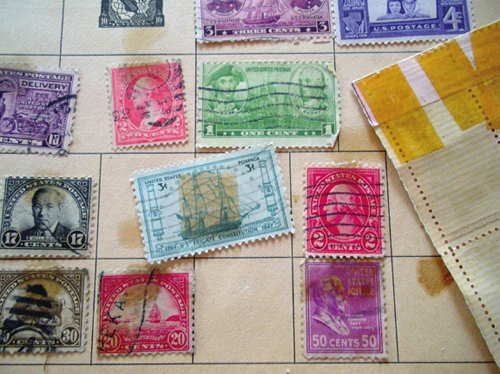 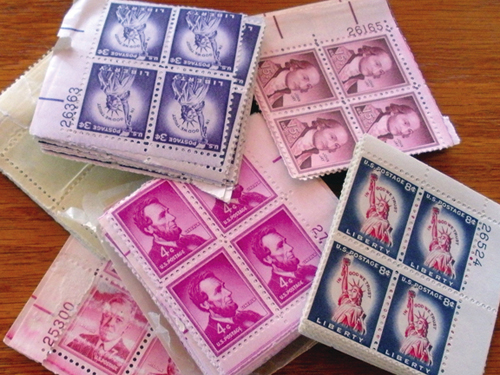 A previous Refresher Course looked at factors of stamp condition related mostly to whether the stamp was unused or used.

This column will consider other aspects of condition that affect a stamp's value.

Fresh color can significantly enhance the value of a classic stamp.

The quality and nature of the inks used to print stamps has varied widely over time. Some stamps printed 100 years ago or more have faded and show their age badly, but a classic stamp that still looks like it did when it came from the post office will bring a premium price.

Unusually large margins are often referred to as "jumbo" or "boardwalk" margins.

A United States 12¢ black George Washington stamp (Scott 17) with four unusually large margins is shown in Figure 1. Most dealers would say the margins on this stamp are either jumbo or boardwalk.

Dealers would charge and collectors should expect to pay a premium for this stamp because of the size of its margins.

A stamp with a wing margin has a very large margin at one of its edges. Wing margins come from the outer row of one side or the other of a stamp pane or sheet. They are created when the perforating machine includes a large part of the unprinted pane or sheet margin on one side of the stamp.

A Cypriot 4-penny light olive-green Queen Victoria stamp (Scott 4) with a wing margin is shown in Figure 2. Some collectors would pay extra for a wing-margin stamp, but others would not.

In the old days, stamps were printed from a plate, usually a flat piece of metal, made of copper, zinc or steel on which an engraved image had been transferred or otherwise duplicated.

Any variety in a stamp arising from a characteristic of a plate or a change to a plate is called a plate variety. Collectors often pay a premium for plate varieties.

A die is an engraved block of metal used to duplicate a stamp image.

Die varieties result from minute differences between different dies for the same stamp issue or from a die that is changed. Die varieties that are scarce are usually more valuable than common ones.

Selvage is paper that is attached to the stamp but that is not part of the stamp. Selvage can be unprinted or it can have marginal markings, guidelines or designs printed on it. The selvage attached to a stamp is one of the factors of condition that can affect the value of a stamp in several ways.

The East Africa and Uganda Protectorates red and green on greenish paper 500-rupee King George V stamp (Scott 59) shown in Figure 3 has selvage attached at the top and to the right of the stamp.

The selvage, bearing plate No. 1 and control No. 071, shows that the stamp is from the upper-right corner of the sheet. Because only one stamp from each sheet had this selvage and because not all of those that had it still retain it, the value of this stamp might be considerably enhanced beyond the value of a similar stamp without the selvage. All it takes is someone willing to pay the asking price.

Plate numbers are just one type of marginal marking that can enhance a stamp's value.

Shown in Figure 4 is a top-margin example of an imperforate British 1-penny red-brown Queen Victoria stamp (Scott 3). The stamp includes the top margin with part of an instructional inscription: "In Wetting the Back be careful not to remove the Cement." Some collectors would be willing to pay a premium for this stamp.

A position piece is a stamp or multiple with marks on the stamps or in the selvage that identify the location that the piece came from in the sheet or pane.

An arrow block of four of the United States 2¢ Sloop Restorationen stamp (Scott 620) is shown in Figure 5.

For U.S. bicolor stamps, the arrow was printed when the design frame was printed, on the first pass through the printing press. The arrow showed the printer which way the sheet should be fed into the press for the second pass that printed the stamp's vignette. The arrows helped avoid printing stamps with inverted centers.

A straightedge is an edge of a stamp that naturally lacks perforations. A stamp with one or two straightedges will sell for less than a comparable stamp perforated on all sides.

Up until roughly the 1930s, many U.S. stamps were not perforated between the panes in the larger sheet. Instead, the sheets were merely trimmed in those locations.

The stamps along the trim edge have one straightedge at the top, bottom or a side, and the stamps from the corner positions would have two adjoining straightedges at top or bottom and one side.

Figure 6 shows a U.S. 10¢ yellow-brown and black Fast Ocean Navigation stamp (Scott 299) with a straightedge at bottom. The bottom of the stamp includes part of a printed guideline used for cutting the sheet into panes. This stamp is from the bottom row in the top pane of 100.

Stamps with straightedges have become increasingly scarce over the years because of the addition of fake perforations.

Markings and notations applied or written by experts, dealers or collectors can also affect a stamp's value.

In general, any marking or writing on a stamp detracts from its condition and value. When a collector or dealer writes a catalog number or value on the back of a stamp in pencil — or even worse, in ink — the value of the stamp theoretically goes down.

In the past, some stamp dealers privately stamped or printed advertisements on the backs of cheap stamps. These stamps can be collected as collateral material, but they are not the same as stamps issued with advertising printed on the back.

Experts in Europe often apply certifying marks directly to the backs of stamps. Some experts placed a mark in one position to indicate a genuine stamp but used the same mark in a different position on the back to indicate that the stamp was counterfeit.

Such experts' marks have never been popular with most American collectors, but in a European market, the right expert's mark in the right place on the back of a stamp could increase its value.

The back of a Lombardi-Venetia 3-soldus green Imperial Crest stamp (Scott 21) is shown in Figure 7. An expert's mark is stamped in purple at the lower left of the stamp.

Blind perforations occur when some of the perforating pins in a perforating machine are broken, blunted or missing. This results in one or more perforation holes not being punched through completely or at all.

A U.S. 30¢ orange-red Benjamin Franklin stamp (Scott 516) with blind perforations at the right edge of the stamp is shown in Figure 8.

The slings and arrows of outrageous fortune have not been kind to some stamps.

Damage to a stamp is called a "fault." Except for extremely rare stamps, faults always detract from a stamp's theoretical value, no matter how flowery the language used to describe the stamp.

One type of damage possible with stamp multiples or stamps with attached selvage is perforation separation. If any of the perforations on the stamp shown in Figure 3 or the block shown in Figure 5 are separated, the item's value would be reduced.

When stamp perforations do not separate cleanly and evenly, but leave a stamp with short or missing perforation teeth, the stamp is said to have "pulled perfs."

The Bermudan 2-shilling yellow-brown Queen Elizabeth II stamp (Scott 158) shown in Figure 9 has pulled perforations at the top-left and bottom of the stamp.

Scuffs result when a stamp is struck a glancing blow removing some of the stamp design or paper.

Thins are often the result of nonpeelable stamp hinges being peeled from a stamp. They remove part of the stamp paper with it.

Rough handling can produce holes, tears or creases in the stamp paper.

Stamps that have changed color since they were printed are called color changelings. This can occur through exposure to sunlight or oxidation.

Stains and toning are usually the result of improper storage plus heat or humidity.