Cover collecting has its own terminology 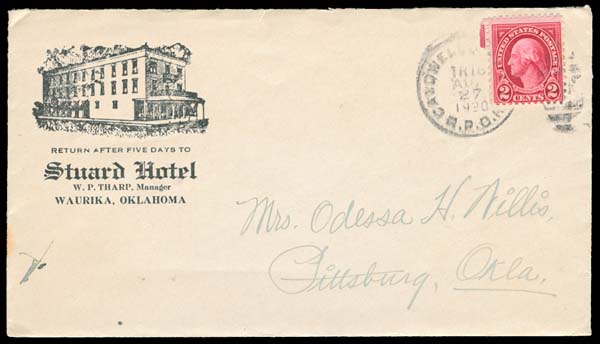 Figure 1. An advertising cover with the corner card of the Stuard Hotel in Waurika, Okla. A duplex cancel was used on the 2¢ carmine George Washington stamp. Click on image to enlarge.

Cover collecting is one of the larger subcategories of stamp collecting.

Linn's World Stamp Almanac, the Millennium edition of 2000, defines "cover" as: "An envelope or piece of postal stationery, usually one that has been mailed. Folded letters that were addressed and mailed without an envelope and the wrappers from mailed parcels are also covers."

Advertising cover: A cover that bears advertising for a business firm, commercial product, hotel or other enterprise. The cover shown in Figure 1 is an advertising cover from the Stuard Hotel in Waurika, Okla.

Auxiliary marking: Informational or directional markings, usually postal, but other than a cancellation or a postmark.

The back of a cover mailed to the America embassy in Tiblisi, Georgia, is shown in Figure 2. A handstamped boxed "X-RAYED" auxiliary marking informs that the cover was x-rayed before it was delivered.

Backstamp: A postmark applied to mail by the receiving post office or by a post office handling the piece while it was in transit. Backstamps are usually on the back of a cover, but they can be on the front. Also called a receiving mark.

The cover shown in Figure 2 has two backstamps.

Cachet: A design or text added to a cover. The cachet often corresponds to the design of the postage stamp, the mailstream journey of the cover, or some type of special event. Collector-prepared first-day covers, first-flight covers and special-event covers usually bear cachets.

Cancellation: A mark placed on a stamp by a postal authority to deface the stamp and prevent its reuse. Some common forms of cancellation include pen cancels, handstamps and machine cancels. A handstamp was used to cancel the stamp on the cover shown in Figure 1.

Censored mail: A cover bearing a handstamp, tape or label indicating that the envelope was opened and the contents inspected by a censor, civilian or military. Mail is often censored during wartime.

The cover shown in Figure 3 is a postcard from a Polish prisoner of war who was serving in the Austrian army and taken prisoner by the Russians during World War I. The triangular handstamp in purple ink shows that the card was censored by the Russians.

Commercial cover: This term is generally used to denote a cover that was not created by or for collectors (in contrast to the term "philatelic cover"). Specifically, a commercial cover is one that was used for business, institutional or commercial purposes.

The cover shown in Figure 4 was mailed Oct. 28, 2004, from the coroner's office in Jurbarkas, Lithuania, to the regional hospital in Raseiniai, Lithuania. It is undoubtedly a commercial cover.

Controlled mail: A system in which the mailer selects desirable stamps for outgoing mail, affixes them, arranges for a specific manner of cancellation and secures the return of the stamps from the addressee. In some cases, controlled mail operations can provide examples of specific rate fulfillment or similar postal use.

Corner card: An imprint on an envelope, usually in the upper-left corner, for the commercial, institutional or private source using the envelope, similar to business card or letterhead imprints. It usually includes a return address. The cover shown in Figure 1 has the corner card of the Stuard Hotel in Waurika, Okla.

Crash cover: A cover that has been salvaged from the crash of an airplane, train, ship or other vehicle. Such covers often carry a postal marking explaining damage or delay in delivery. Crash covers from nonflying vehicles are sometimes called "wreck covers."

Directory markings: Postal indication of forwarding for delivery or failed delivery attempt, stating the reason for failure. Examples are "No Such Number," "Address Unknown" and "Moved."

Duplex cancel: A two-part postal marking consisting of a canceler and a postmark. The canceler, often called a killer, voids the stamp so it cannot be reused. The postmark notes the date and place of mailing.

The 2¢ carmine George Washington stamp on the Figure 1 cover was canceled with a duplex cancel (postmark at the left, killer bars at the right).

Entire: An intact piece of postal stationery, in contrast to a cutout of the imprinted stamp. This term is sometimes used in reference to an intact cover or folded letter.

The cover shown in Figure 5 is an entire 3¢ violet Mount Vernon postal stationery envelope (Scott U526).

Etiquette: A gummed label applied to an envelope or an imprint that designates a specific mail service. Airmail

etiquettes are most common. A registered airmail cover mailed from Tula, Russia, to Los Angeles, Calif., is shown in Figure 6. It bears an imprinted airmail etiquette in the upper-left corner.

Fancy cancel: Any pictorial or otherwise unusual obliterating postmark. More specifically, an elaborate handmade pictorial cancel of the 19th century, such as the Waterbury "Running Chicken" of 1869 or the many intricate geometric shapes used during that period in post offices around the United States.

Flown cover: A cover that was carried by air. Often used to refer to covers carried on experimental or other special flights.

Franking: An indication on a cover that postage is prepaid, partially prepaid or that the letter is to be carried free of postage. Free franks can be written, handstamped, imprinted or affixed.

Front: The front of a cover with most or all of the back and side panels torn away or removed. A front, while desirable if it bears unusual or uncommon postal markings or stamps, is less desirable than an intact cover.

A future Refresher Course will conclude this discussion of cover terminology