Determining printing methods can confuse anyone 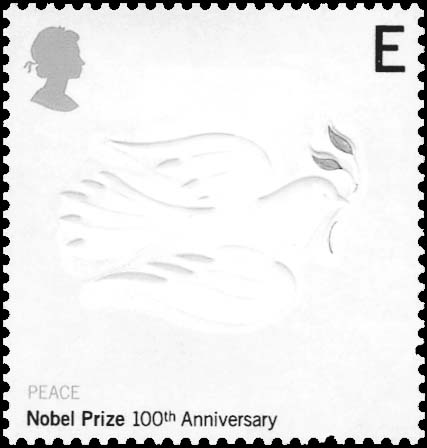 This British stamp was produced by embossing. 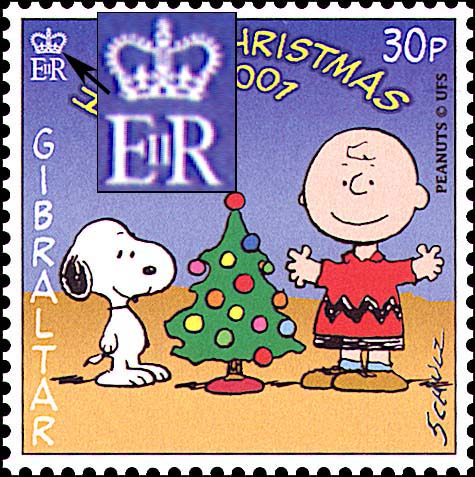 This 2001 Gibraltar stamp was printed using offset lithography. The detail depicts the irregular edges and dot patterns that typify this printing process. 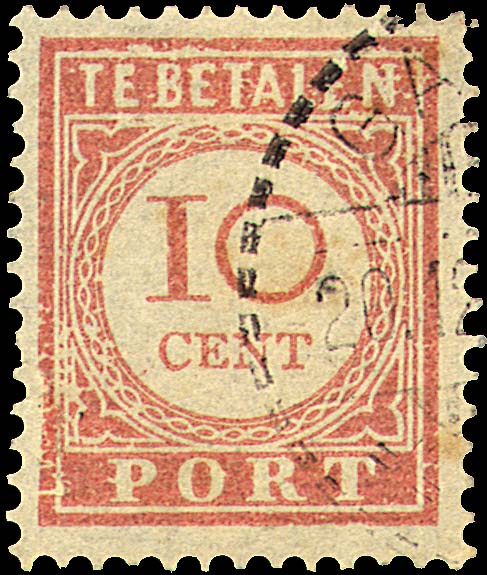 This 10¢ Netherlands Indies postage due stamp was printed by relief.

Unscreened photogravure was used to print the borders of this 1945 definitive stamp pair from South Africa. 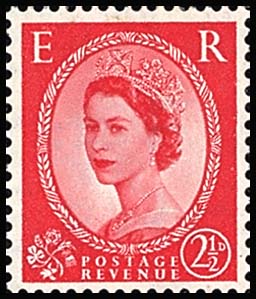 The 1952 2½d definitive from Great Britain is a good example of a photogravure stamp. It clearly shows the physical characteristics that make this printing method distinct. 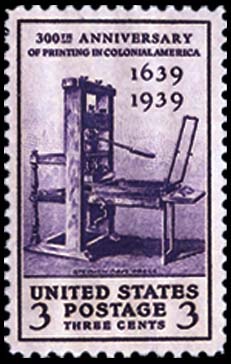 This 1939 U.S. stamp pictures a flat-bed press. Ironically, this stamp was printed on a rotary press. 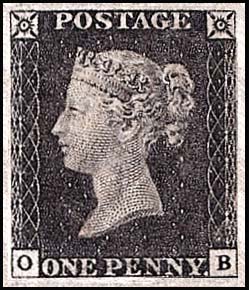 The world's first adhesive stamp, the 1840 Penny Black of Great Britain, was created by line engraving, as were most of the world's early stamps.
Previous
Next

Naturally, such inconsistency can cause confusion, not only for relatively new collectors but for seasoned collectors as well.Even among stamp collectors, sometimes the same words in stamp printing processes can mean different things.

Various stamps from around the world have been printed in the same design with different printing methods, and often this has a significant impact on the stamps' market values.

This column, therefore, will attempt to enlighten on the basics of stamp printing techniques and some of the distinguishing characteristics of the various methods.

There are four basic types of printing methods: intaglio, relief, planographic and embossing.

In intaglio, which includes line engraving and photogravure, the ink lies in recessed portions of the printing plate. The designs of stamps printed by intaglio are generally very sharp and crisp.

The recesses are cut into the substance of the metal die, line by line and dot by dot, in line engraving.

Photogravure, on the other hand, uses a process of photography and etching to create the recessed design on the die.

In the early days of stamp creation, intaglio stamps were all line engraved.

The first line-engraved postage stamp was the first adhesive postage stamp, the 1840 Penny Black of Great Britain, shown in Figure 1.

Originally, this was done on a flat-bed press.

A flat-bed press is pictured on the stamp shown in Figure 2. This 1939 United States 3¢ stamp (Scott 857) celebrated the 300th anniversary of printing in colonial America.

Later, printing plates were curved and wrapped around cylinders on a rotary press so that printing could be done on a continuous web of paper rather than individual sheets. The Figure 2 stamp was printed on a rotary press.

Often the difference between stamps of the same design printed on a flat press and on a rotary press can only be determined by careful measurement. The design from the rotary press might be slightly taller than that from the flat press because of the curvature of the plates.

A characteristic of line-engraved stamps is that the ink stands up above the surface of the paper. Also, to some extent, the back of the stamps often bear an impression of the design because of the pressure applied during printing.

The raised effect of the ink can usually be seen with a magnifier, and it can even be felt by running a fingernail across the surface of the stamp.

Generally, the aberrations of the paper, especially the impressions on the back, are more pronounced in dry-paper printings than in wet-paper printings.

Photogravure, or simply gravure, is similar to line engraving in the method of ink transfer, but the printing plate recesses are created differently.

The stamp design is photographed through an extremely fine screen to create a pattern of dots, or more recently, the pattern is created digitally.

Instead of the skilled hands of an engraver, a chemical or electrical process etches the design into the printing plate.

The dot formation can be seen throughout the design of a photogravure stamp under magnification. The pattern consists of dots of the same size but of varying intensities, based on the depth of the recesses in the printing plate.

The 1952 2½d definitive stamp of Great Britain (Scott 296), shown in Figure 3, is an example of a stamp printed by photogravure.

Under magnification, the distinctive physical characteristics of photogravure are evident on the 2½d stamp.

In the lighter portions of the background, the dots are easily seen. The uninked portions that make up the letters "E" and "R" in the upper corners have no dot pattern, while the pattern is very distinct around the outside edges of the letters.

Because photogravure stamps are not subjected to the intense pressure of a line-engraved stamp, the printed surface of the gravure stamps feels flat and no impression appears on the back.

In some photogravure stamps, the dot pattern is irregular with cells of various sizes and depths. These grainy stamps are called "unscreened photogravure."

The unscreened photogravure method was used on the 1945 2d purple and slate black definitive stamps (Scott 55) of South Africa, shown in Figure 4.

Relief printing can be considered the opposite of intaglio printing. In this method, the inked portion of the printing plate is raised, while the uninked portion is recessed. The concept is similar to the manner in which a typewriter or a rubber handstamp prints.

Another notable characteristic of relief-printed stamps is an excess of color around the edges of lines in the design.

This is caused as the ink is squeezed outward and over the vertical edge of the printing surface when pressure is applied by the ink roller. When the paper is pressed against the relief, the excess ink at the edges of the design is transferred to the paper.

This halo effect is usually evident under strong magnification.

Relief-printed stamps usually do not have very fine lines because there is not enough material on the plate to support the fine lines, and the rigor of the printing process would quickly degrade the plate.

Fine and intricate detail is virtually impossible with this method of printing.

Relief stamps also are usually printed on comparatively rough paper that absorbs the ink more readily than smooth paper. Ink printed on smooth paper by the relief method is likely to smear.

The earliest forms of relief dies were made from wood. Throughout history, however, relief dies also have been made from ivory, rubber, stone, brass, copper and other metals.

The designs on relief plates can be engraved as they are with intaglio or projected through a screen (called a halftone screen) and etched chemically or mechanically as a screened photogravure plate is.

The 1913 10¢ salmon postage due stamp from the Netherlands Indies (Scott J30) shown in Figure 5 was printed by relief.

Stamps printed by planographic processes are very flat by comparison to the other printing processes.

This is because the surface of the printing plate is flat.

The most commonly known method of planographic printing is lithography.

This type of printing is based on the principle that oil and water do not mix. Ink used to print stamps is oil based.

The printing surface is treated to hold water in the areas that are not to be inked. When the ink is applied to the plate, the areas with the water repel the greasy ink.

In offset lithography, the printing base prints an impression on a rubber-covered cylinder that rolls over the surface of the paper, to which the ink is transferred.

Another form of lithography is photolithography, in which the design is transferred directly to the printing surface through a photo-mechanical process.

The designs of lithographed stamps can be very intricate, but the lines have a tendency to be unsharp.

The edges of the printed areas appear, almost unfailingly, in lithographed stamps as an irregular string of beads. This is because planographic printing is made up of minute dots of ink that are squashed flat by the printing rollers as they are transferred to the paper.

Many modern stamps, especially multicolor stamps, are printed using offset lithography. This method allows for a great deal of flexibility in design, and it is considerably less expensive than the other printing methods.

The 2001 30-penny Gibraltar Christmas stamp shown in Figure 6 is a good example of the design capabilities of offset lithography. The design is colorful with lots of intricate detail.

The enlarged detail of the royal cypher in the upper-left corner of the stamp shows the irregular edges of the printing and the dot pattern typical of the process.

Embossing is not often used in the production of stamps; however, it is commonly found used to make postal stationery.

Embossing is the result of paper being pressed between a recessed die and a corresponding relief die to create a three-dimensional impression in the paper that is evident from either side.

The 2001 Great Britain stamp shown in Figure 7 (Scott 1995), the European rate of the Nobel Prizes set, was produced by embossing.

Embossed designs can be produced with or without ink.