Figure 3. The first U.S. postal card, issued in 1873. The imprinted 1¢ postage stamp is in the upper-right corner. Click on image to enlarge. 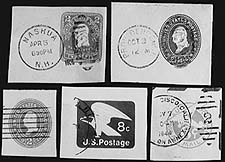 Figure 2. Collectors once trimmed stamp imprints from envelopes, creating "cut squares" like the five shown here. It is now preferred to keep envelopes intact to preserve interesting details that would be otherwise lost. Click on image to enlarge.
Previous
Next

We're used to our postage stamps having perforations or die-cut edges all around and an adhesive on the back.

The stamps that are found on postal stationery don't fit this description, however.

Like most standard postage stamps, postal stationery items show a prepaid postage value, but the stamps are imprinted directly upon the envelope, card or sheet that is being mailed.

Postal stationery is a popular field of study for many collectors. Because these items bear imprinted postage, they play a role in postal history that is equal in importance to that of the postage stamp.

The postal stationery of the United States can be examined in three basic categories: envelopes, postal cards and aerograms (also known as air letter sheets).

As with postage stamps, collectors save postal stationery in either mint (unused) or postally used condition.

All of these items are listed and described in the Scott Specialized Catalogue of United States Stamps and Covers.

Stamped envelopes are sold by the United States Postal Service as a convenience to mailers. With the stamp already printed on the envelope, the mailer need only address the envelope and it is ready to mail.

The first U.S. stamped envelopes were placed on sale July 1, 1853, just six years after the first U.S. adhesive postage stamps appeared. Like those first stamps, the envelopes featured images of George Washington and Benjamin Franklin (though the Franklin envelope wasn't issued until 1860).

The imprinted stamps on those early envelopes were embossed upon the envelope paper. Embossing is a method that raises up the design so the paper has a texture or raised relief that can be felt.

Stamped envelopes have always been sold for more than the cost of postage alone, to offset envelope manufacturing costs. A 32¢ stamped envelope, for instance, sells for 38¢.

In years past many collectors trimmed the imprinted stamps from the corners of stamped envelopes and saved them. The rectangular trimmed imprints are known as "cut squares."

There are two good reasons for this. By preserving the envelope intact, the collector also saves interesting information about where and when the postally used envelope was sent and other aspects of its postal history.

Also, listings in the Scott U.S. specialized catalog clearly show that cutting the stamp from a stamped envelope reduces its value in every instance. For some envelopes, cutting the stamp reduces the value by 90 percent.

Twenty years after the stamped envelope made its first U.S. appearance, postal customers were offered the 1¢ postal card.

Shown in Figure 3 is the earliest-known use of that first postal card, bearing a May 11, 1873, postmark from Providence, R.I.

A postal card differs from a postcard in that the postal card has a prepaid postage stamp imprint. When you buy a postcard, you also have to buy a stamp if you want to mail it.

Collectors save postal cards only as entires. There is no such thing as a "cut square" for postal cards. When the stamp is cut from a postal card, all that remains is damaged parts.

Nearly 300 designs of standard U.S. postal cards have been issued, but of these, more than 100 have appeared during the past four years.

In 1994 the Postal Service began regularly issuing picture postal cards in sets that sell for more than the face value of postage.

A picture postal card set depicting Tropical Birds was issued July 29 with postage values of 20¢. The set of 20 cards with four different designs is sold for $6.95.

The 20¢ Cardinal Honeyeater picture postal card from that set is shown front (postage side) and back in Figure 4.

With the exception of picture postal cards, U.S. postal cards are sold for the face value of the postage imprint.

The message is written upon the blank reverse side of the aerogram. The sheet is then folded and sealed to resemble an envelope with the stamp imprint in the upper-right corner.

Since the appearance of the first U.S. aerogram, about two dozen major varieties have been created, along with numerous interesting minor varieties.