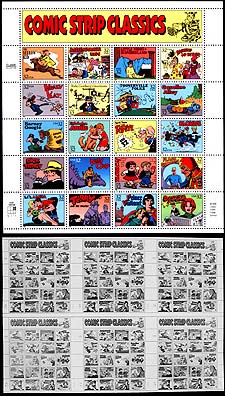 Figure 1. The 1995 Comic Strip Classics stamps were printed in sheets of 120 stamps (bottom). Each sheet was divided into six panes of 20 stamps, such as the example at top.

Words can help explain what you don't understand, but words can also be the cause of your confusion.

Articles published in Linn's Stamp News often include definitions for terms that may be ambiguous or unfamiliar.Stamp collectors use a number of different words that have specific meanings within the hobby. You can look up most of these words in a general desk dictionary, but you may not find the specialized definition that is understood by seasoned stamp collectors.

The descriptions provided in this week's Refresher Course may help to clarify the meanings of some common specialized terms used within the stamp hobby.

Pane, sheet and press sheet. The confusion over the terms "pane" and "sheet" most likely began because of the way the term "sheet" is used by the general public.

It's common for someone to go into a post office and ask the clerk for a sheet of stamps. The customer knows what he wants — probably about 20 or 25 stamps.

The clerk knows too, and that's what he'll provide.

For stamp collectors, though, what the postal clerk sells the customer is not a sheet: it is a pane.

The Comic Strip stamps that were sold at post offices across the United States came in a unit of 20 stamps, as shown at the top of Figure 1. That unit is known as a "pane" by stamp collectors.

The reason stamp collectors make the distinction is that the Comic Strip Classics stamps, like most stamps, were printed in much larger sheets that were divided up into individual panes for sale at the post office.

Shown at the bottom of Figure 1 is a sheet of 120 Comic Strip stamps. That larger unit also may be referred to as a "press sheet" or "uncut sheet."

The size of press sheets varies depending upon the issue.

Using the words "pane" and "sheet" correctly when describing stamps helps other collectors understand exactly what is being described.

This rule of thumb is often accurate, but cannot be relied upon every time.

Whether a stamp is "definitive" or "commemorative" is determined not by its size or appearance, but rather, by its print quantity and how long it remains on sale.

A stamp printed in great quantities and placed on sale for an indefinite period of time is a definitive stamp.

An example is the 32¢ Flag Over Porch stamp shown at top left in Figure 2.

A commemorative stamp normally has only one printing. Fewer stamps are printed, and they are generally available for a shorter period.

The 32¢ Kitty Hawk issue from the 1900s Celebrate the Century pane, shown at top right in Figure 2, is a commemorative stamp.

The term "commemorative" describes the fact that the stamp design may recall a special event or individual.

Many countries now issue commemorative stamps that feature more general topics, though, such as flowers, wildlife and the like. The 32¢ World of Dinosaurs stamps issued by the United States in 1997 is an example of this kind of commemorative stamp.

Margin, margin paper. The term "margin" in stamp collecting can refer to an area on a postage stamp, or an area outside the stamp.

The Comic Strip Classics pane of 20 shown at the top of Figure 1 has margin paper all around the stamps, including a decorative bannerlike margin across the top.

People often remove this margin paper (also called "selvage") before using the stamps for mailing. Stamp collectors usually do not remove margin paper from stamps they save.

The word margin can also refer to the unprinted area on a postage stamp around a central stamp design known as the vignette (pronounced "vin-YET").

The two United States stamps at the top of Figure 2 both have unprinted margins around the multicolor design.

Collectors sometimes refer to wide margins and narrow margins when describing this area on stamps.

Israel Scott 1275, a 1996 stamp honoring composer Gustav Mahler, is shown in Figure 3. The tab can be seen as margin paper below the single horizontal row of perforations.