Dream big and collect the impossible with stamps on stamps 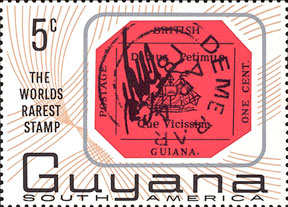 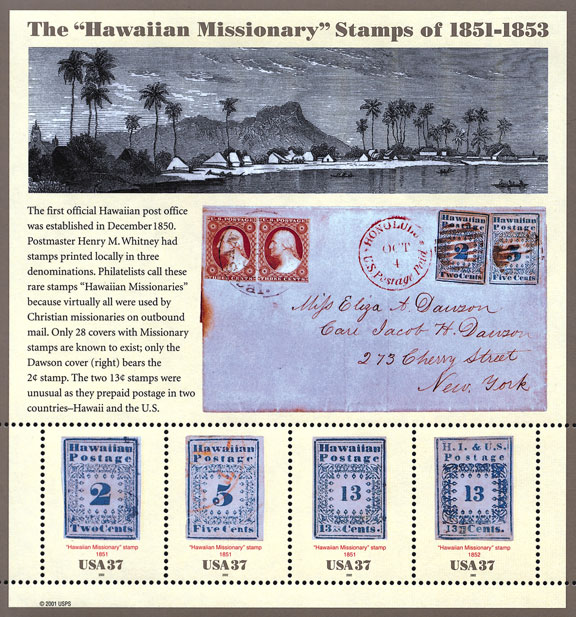 Figure 5. The legendary 1851 Hawaiian Missionary stamps were reproduced on a United States souvenir sheet in 2002. 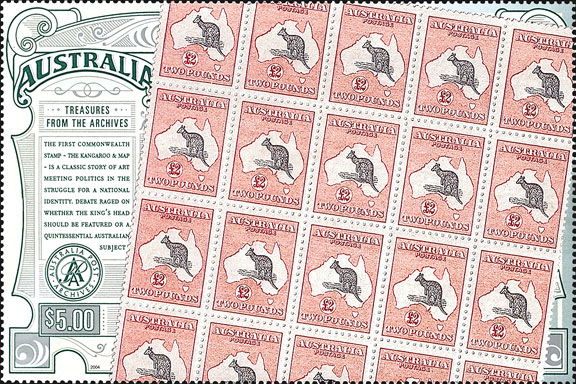 Figure 4. The popular and desirable 1913 Australian Map and Kangaroo stamps were honored with reproductions of the image on a $5 stamp in 2004. 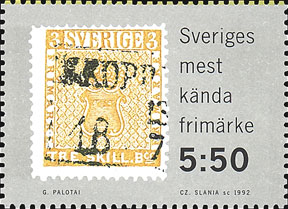 Figure 3. There's only one 1855 Three Skilling Yellow stamp from Sweden, but its picture appeared on a 1992 booklet of three different values, including this 5.50-krona stamp. 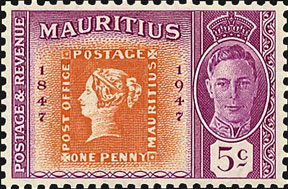 Figure 2. Some of the world's rarest stamps, the Mauritius Post Office issues, were remembered with a set of four stamps in 1948. Mauritius Scott 225 shows that country's Scott 1. 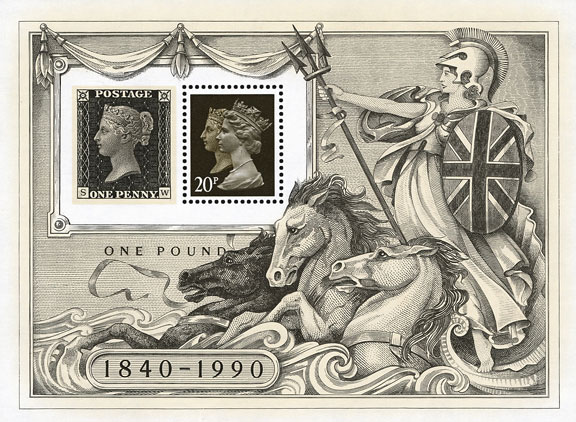 Figure 1. The image of the world's first adhesive stamp from 1840 can be collected inexpensively on this 1990 British souvenir sheet.
Previous
Next

If money were no object in acquiring all of the world's most coveted postage stamps, would you want them in your collection? Most of us would say "yes" to that question without hesitation.

Suppose you won the lottery when the prize was several hundred million dollars. With that windfall, you could afford many of the world's most famous stamps, but only if they were available for purchase. Stamps housed in museums, governmental or royal collections or in private hands of owners unwilling to sell, make the stamps unavailable at any price.Most of us also might say that money is the limiting factor in owning the world's most famous stamps, but that is only partially true. Availability is an even bigger obstacle to ownership of stamp rarities.

However, there is a way to own the world's greatest stamps without being a multimillionaire — or a cat burglar: Collect a topic known as stamps on stamps.

This topical area refers to a postage stamp that has an image of a well-known or much-loved postage stamp as its primary design element.

Great Britain's 1840 Penny Black (Scott 1) is famous for being the world's first adhesive postage stamp, and is an exception to the norm of famous stamps being prohibitively costly. Even today it is neither rare nor outrageously expensive, but a substitute for owning a genuine Penny Black is available with Britain's 150th anniversary reissue of the Penny Black image on a souvenir sheet in 1990 (Scott MH193f) shown in Figure 1.

One of the most recognizable stamps in the world has to be the 24¢ Jenny Invert airmail stamp issued by the United States in 1918. The famed error appeared as one of four rarities on a 1993 U.S. stamp (Scott 2782) honoring the National Postal Museum, and it will appear again come Sept. 22 when the U.S. Postal Service will issue a souvenir sheet containing six engraved Jenny Invert stamps printed using the original dies. The denomination will be different: $2 face value for each of the six stamps on the sheet, rather than the original 24¢.

According to the Measuring Worth website, www.measuringworth.com, 24¢ in 1918 dollars is equivalent to $2.51 today, so that souvenir sheet is quite the bargain.

You can attend the first-day ceremony for this iconic design reissue at the grand opening of the Smithsonian National Postal Museum's William H. Gross Stamp Gallery in Washington, D.C.

If you cannot wait until September to own a Jenny Invert stamp on stamp, Nicaragua issued the image of one in 1976 (Scott 1042), in a set of 12 stamps that recognized legendary stamps from all over the world. Owning this inexpensive set is a grand way to launch a stamps-on-stamps collection.

The 1847 Mauritius Post Office stamps issued by the tiny island nation have long been a source of wonderment. Books have been written about them, and a suspenseful play by Theresa Rebeck titled Mauritius opened on Broadway in 2007 and has since been performed all over the United States. The play involves two half-sisters who inherit a rare stamp collection and captures the flavor of an old-fashioned stamp shop and the passions and problems of owning some of the most valuable stamps in the world.

You can own the Mauritius Post Office stamps quite easily by acquiring the centennial set of four stamps (Scott 225-28) issued by that country in 1948. Figure 2 illustrates Scott 225, showing Mauritius Scott 1.

The 1847 Mauritius rarities got their name because the local engraver, J. Bernard, etched "Post Office" instead of "Post Paid" when creating the die for the printing plates. According to the Scott Classic Specialized Catalogue of Stamps and Covers 1840-1940, there are two used examples and only one unused of the 1-penny stamp in private hands. All unused copies of the 2d stamps are in museum collections. But you can have mint examples of both values if you set your sights on the 1947 centennial stamps.

Sweden's famous 1855 Three Skilling Yellow stamp (Scott 1a) is a well-known error of color, orange-yellow instead of the blue-green it was supposed to be. Only one example is known to exist, and it sold most recently, in 2010, for an undisclosed sum estimated to approach $3 million, which is the value listed in the Scott Classic specialized catalog. (The stamp had sold at auction in 1996 for $2.27 million.)

In 1992, Sweden issued a booklet of three different values of stamps depicting the 3s yellow. The 5.50-krona stamp from this set is shown in Figure 3 (Scott 1945).

Probably one of Australia's most desirable stamps is the £2 Map and Kangaroo issue of 1913. Genuine examples are not that hard to find but would cost several thousand dollars to acquire. Lacking the money to buy a single £2 Map and Kangaroo, how about buying a partial pane instead? A partial pane of the £2 stamp is shown on the 2004 $5 stamp pictured in Figure 4 (Scott 2284). The stamp also exists as part of a self-adhesive souvenir sheet (2285).

In May, Australia Post issued a new Map and Kangaroo stamp in a $10 denomination.

While it is still a current issue, you can order this beauty directly from Australia Post at www.shop.auspost.com.au.

The 1851 Hawaiian Missionary stamps are legendary, and the question of whether some of them are genuine or fake is still debated in certain philatelic circles. So-called because they were used by missionaries working in the Hawaiian Islands in the 1850s, these stamps had not been plentiful until the USPS issued a souvenir sheet bearing them in 2002 (Scott 3694), shown in Figure 5.

The souvenir sheet is inarguably genuine.

Often hailed as the "world's rarest stamp," the British Guiana 1856 1¢ magenta was reproduced on two 1967 Guyana stamps (Scott 26-27). The lower of the two denominations is shown in Figure 6.

Many more of the world's most desirable issues are pictured on stamps.

Just think — you could have albums full of the world's most famous, rarest and most desirable stamps and still keep within your hobby budget.