Errors versus errors, freaks and oddities

Figure 8. A dramatic color misregistration freak example of the U.S. 8¢ Postrider commemorative stamp, Scott 1478. Traces of red in the shading lines of the foreground keep this from being a major error stamp. 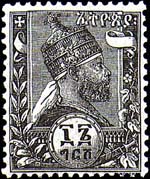 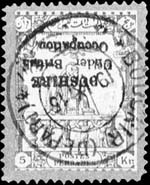 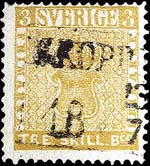 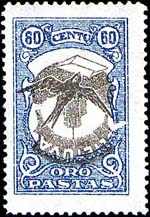 Errors, freaks and oddities: These three words, frequently bandied about in stamp collecting, are nearly as frequently misunderstood. Ask three different collectors to define and distinguish an error, a freak and an oddity, and you will probably get five different answers.

Usage of the words is also confusing. Major errors get minor listings in the Scott Standard Postage Stamp Catalogue. You have to be a major to qualify for a minor.

Error specialist Stephen Datz refers to stamps that fail to qualify as major errors as EFOs. Note that the E stands for error. Confusing, yes?

One collector's error is likely to be another collector's freak. And who knows what the real difference is between a freak and an oddity?

In Chapter 12 of Linn's World Stamp Almanac, John Hotchner carefully and logically defines the words, but the definitions do not seem to be generally accepted within the EFO community. He may be trying to impose more order than is possible on such a chaotic subject.

The lively discussion among EFO specialists continues, as the cover articles of the past two issues of The EFO Collector show.

As is the case with many basic questions about stamp collecting, a good place to start is with the introduction to the Scott Standard Postage Stamp Catalogue. The Scott definition of an error is: "Stamps that have some major, consistent, unintentional deviation from the normal are considered errors."

Types of errors listed by Scott include, "missing or wrong colors, wrong paper, wrong watermarks, inverted centers or frames on multicolor printing, inverted or missing surcharges or overprints, double impressions, missing perforations and others." Scott adds: "Inconsistent or randomly appearing items, such as misperforations or color shifts are classified as freaks."

Error stamps are listed as minor number varieties in the Scott catalog, and in the marketplace they usually command much higher prices than EFOs do. Accordingly, there is room between these definitions for a great deal of discussion, argument and hand-wringing about the assignment of a given stamp to either category.

The 60-centai blue and black swallow airmail stamp of Lithuania with center inverted, Scott C39c, shown in Figure 1, is an example of one of the most striking types of major errors, an inverted center. The most famous example of this is undoubtedly the 24¢ carmine-rose and blue Curtis Jenny airmail stamp, Scott U.S. C3a.

The value of major errors is affected by their relative scarcity, demand and their eye appeal, and the Inverted Jenny scores a solid 10 in eye appeal. Who wouldn't like to own one of the striking Jenny Invert stamps? The next time one comes up for sale, you might be able to buy it for $170,000 or so.

The U.S. 4¢ Dag Hammarskjold black, brown and yellow commemorative stamp with yellow background inverted, Scott 1204, shown in Figure 2, demonstrates the rarity principle. When a collector discovered an error pane of the normal stamp, Scott 1203, the U.S. Post Office Department, in a fit of bureaucracy, intentionally printed 40 million of the error stamp. The intentionally printed version is identical to the original error stamps, so the philatelic value of the errors was destroyed.

Sweden's 3-skilling banco yellow Coat of Arms definitive stamp, Sweden Scott 1a, shown in Figure 3, is the premier example of an error of color. The normal 3sb stamp is green. Based on its most recent sale price, it is the world's single most valuable stamp.

Not all famous error stamps come from major countries. Bushire is a city in southwestern Iran. The British overprinted 29 Iranian stamps for use there when they occupied the city for two months during World War I. The 5-kran silver, brown and green commemorative stamp with black overprint inverted, Bushire Scott N27a, shown in Figure 4, is an example of an overprint-inverted error. To collect Bushire and be complete would require spending about $10,000 for this stamp, if one could be found for sale.

Not all errors are world-class rarities valued at thousands of dollars. The 10-heller orange Eagle definitive stamp of Poland, Scott 111, shown in Figure 5, is one of several in the 1919 series that exist as double impression errors. Scott only mentions them in a note.

The 4-guerche lilac-brown, 8g violet and 16g black Menelik II stamps of Ethiopia were not issued for postage, but they were overprinted for use as postage due stamps. Each exists as an overprint-omitted error, Scott J3a, J4a, and J7a. The 16g error stamp is shown in Figure 6.

The U.S. 22¢ Abigail Adams multicolor commemorative stamp of 1985 exists imperforate, Scott 2146a. Figure 7 shows one. Errors of perforation can be totally imperforate, as is this example, or imperforate either vertically or horizontally.

Perforation errors are normally collected in pairs as proof that they owe their imperforate status to the production process rather than to a pair of scissors.

In discussing errors, both error specialist Stephen R. Datz and Scott catalog editor James E. Kloetzel emphasize that the appearance of a stamp is of greater significance in determining its status than is the stamp's means of production.

The fact that a color is omitted from the stamp is the primary consideration in listing it as a color-missing error. Whether the omission was caused by a paper foldover, misregistration or other method is of interest, but doesn't bear on the stamp's status as a major error.

What about freaks and oddities? Datz in his annual Catalogue of Errors on U.S. Postage Stamps distinguishes between major-error stamps (the kind listed with a minor Scott number) and everything else, which he collectively calls "EFOs," really meaning just freaks and oddities.

The July 16 issue of Linn's featured a front-page story about a so-called color-missing error of the U.S. 8¢ Postrider commemorative, based upon a color photocopy sent by the collector who owned the stamps. Linn's ran the news story based on the photocopy but asked the collector to send the stamps in for examination.

The front-page error became an inside-page dramatic freak in the Aug. 6 issue. After the stamps were received, they were discovered to have traces of red ink in the foreground shading lines.

A stamp with traces of the color simply cannot qualify as a color-missing error, regardless of how dramatically the colors are misregistered. The four stamps in the block, pictured in Figure 8, represent two distinctly different varieties of freaks.

The top two stamps are more striking, since they are missing the inscription "Rise of the Spirit of Independence" and the American Bicentennial logo entirely, even though traces of red ink remain. The two lower stamps have the inscription and logo at the top of the stamp rather than at the bottom where it appears on a normal stamp.

Both types of freaks contained in this block are striking items with eye appeal. Other general types of freaks include stamps with misplaced perforations, perforation freaks, miscuts, gutter pairs and snipes, creases, albinos and offsets.

Miscuts usually occur when panes of stamps are being cut apart. Because of misalignment, the cut goes through the stamp designs rather than between them. Gutter pairs are stamps connected to each other by unprinted paper. The more esoteric gutter snipe is similar to a gutter pair, but it occurs when only a small irregular part of a stamp is connected to a stamp by blank paper. When paper is creased before or during printing, the crease can be opened to reveal the unprinted paper in the midst of the stamp design.

Albinos are stamps that didn't get inked. They are usually collected attached to a normally printed stamp. Otherwise, they are just a blank piece of paper with perforations. Offsets (also called set offs) can occur when paper misfeeds and an inked impression is transferred from the printing plate to the roller and then to the next pane of stamps printed.

Because there are literally tens of thousands of freaks and because they are often unique, they are impossible to catalog. It is also difficult to generalize about the value of a freak or oddity. Eye appeal is paramount. The more visually striking a freak's appearance, the greater its value.

It is probable that the word "oddity" was appended to errors and freaks to make the abbreviation, EFO, sound like the abbreviation for unidentified flying objects, UFO. Generally, an oddity could be any stamplike object that does not seem to fit into either the error or the freak categories. Like beauty, oddity is in the eye of the beholder.

To find out more about errors and freaks, contact the Errors, Freaks and Oddities Collectors Club.