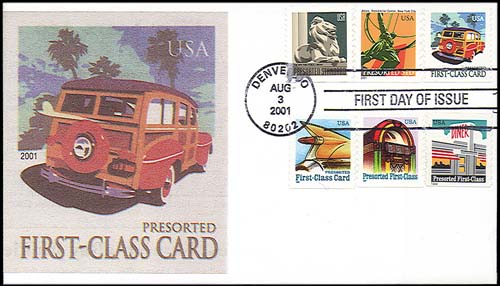 Figure 7. This first-day cover for the (15¢) nondenominated Woody Wagon stamp also bears five others from the series. Click on image to enlarge. 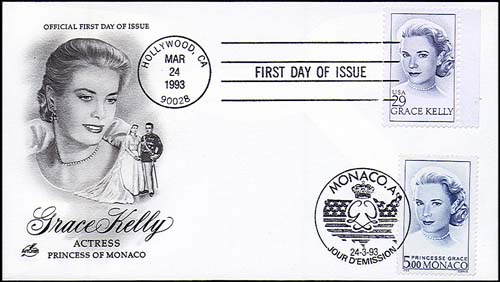 Figure 6. The two Grace Kelly stamps on this cover were issued in two different countries on the same day: the United States and Monaco. Both were able to receive first-day cancels because of the grace period for obtaining them. Click on image to enlarge. 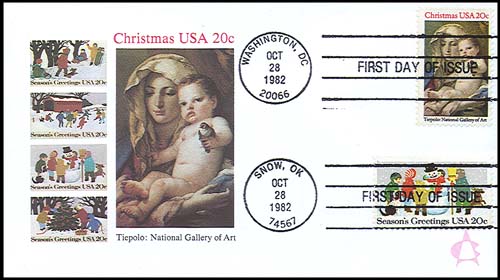 Figure 5. The two stamps on this cover received official first-day cancels from two different cities, thanks to the 30-day grace period for obtaining the cancels. Click on image to enlarge. 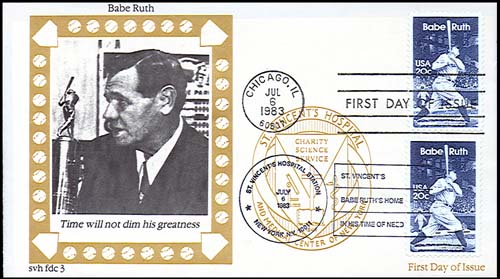 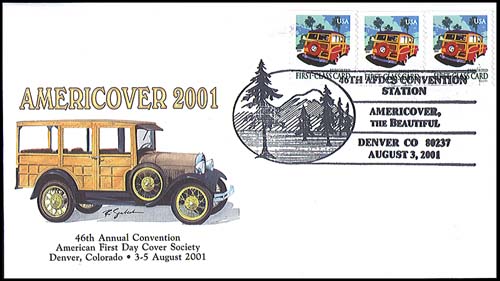 Figure 3. This cover bears a show cancel from the first day of issue for the nondenominated Woody Wagon stamp of 2001. Click on image to enlarge. 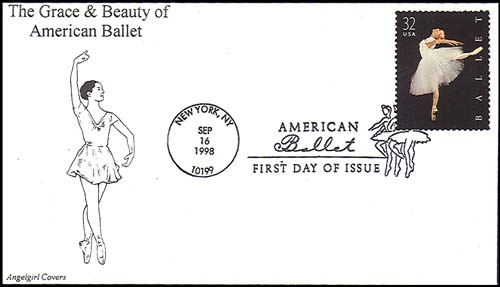 Figure 2. This FDC for the 32¢ American Ballet stamp issued in 1998 bears a pictorial first-day cancel. Click on image to enlarge. 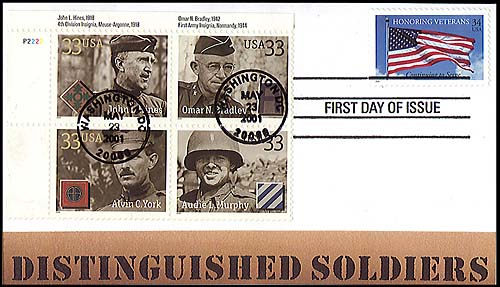 Figure 1. This first-day cover for the 34¢ Honoring Veterans stamp uses a block of four Distinguished Soldiers stamps as a decoration. This decoration is called a cachet. Click on image to enlarge.
Previous
Next

A first-day cover, or FDC, is an envelope bearing a stamp that is canceled with a device stating the day the stamp was issued. Usually, the FDC postmark, also names the city in which the stamp was first placed on sale.

A first-day cover for the 34¢ Honoring Veterans stamp is shown in Figure 1. The stamp was issued May 23, 2001. The envelope is decorated with a block of four 33¢ Distinguished Soldiers stamps. Note the four-line "First Day of Issue" cancel, the typical wording and design since 1978.

First-day cancels for some new stamps, though, can be pictorial, as shown on the 32¢ American Ballet FDC pictured in Figure 2. This stamp was issued Sept. 16, 1998.

In the United States the Postal Service will usually designate one or more cities as official. These are the locations where the new stamp is first made available. The location is often somehow related to the subject of the stamp.

Unofficial FDCs bear postmarks from places other than the official city where the stamp was issued. They may also bear an event cancel dated the same day. The unofficial cover shown in Figure 3 bears three of the nondenominated (15¢) Woody Wagon stamps of 2001 and a show cancel with the date of issue.

First-day covers often are decorated with a cachet (pronounced "ka-SHAY"). A cachet can be any form of envelope decoration. Many collectors like to collect FDCs that bear some design that explains or provides additional information about the stamp.

Cachets can be hand-painted or hand-drawn illustrations, computer-generated art, photographs, other stamps, cutout pictures, rubber-stamp designs or practically anything else. The covers illustrated with this column all are decorated with a variety of cachets. The cachet enhances the cover by complementing the stamp. It can be attractive as well as educational and informative.

One collecting challenge may be to find as many different cachets for a single stamp as possible. Another possibility might be for a collector to make his own cachet for each new stamp or for only those that interest him. Collectors creating their own cachets need to take care to respect any copyrights on stamp subjects. This includes reproductions of the stamp images themselves and other art.

Many professional cachetmakers offer subscription programs. They will automatically send subscribers their brand of FDC for each new issue. Uncacheted FDCs from within the past year are also available from the Postal Service. Many others can be purchased from stamp clubs or dealers.

Collectors can make their own FDCs by buying their own envelopes and sending them to the USPS for servicing (postmarking). Covers can also be purchased already serviced from stamp and cover dealers. If a collector wishes to have covers serviced himself, he usually has 30 days from the date of issue to obtain the official first-day postmark. This 30-day grace period is what enabled the creation of the covers shown in Figures 4, 5 and 6.

The Figure 5 cover shows two holiday stamps issued the same day in two different places. The Christmas stamp was issued in Washington, D.C., and the Season's Greetings stamp was issued in Snow, Okla., as part of a set. Both stamps received appropriate first-day cancels because the collector had 30 days to obtain both.

The international cover shown in Figure 6 bears the Grace Kelly joint-issue stamps issued by the United States and Monaco. Both stamps bear their official first-day cancels.

Customers may purchase the new stamps at their local post office, or they may order them from the USA Philatelic catalog, located online at www.stampsonline.com or by calling 800-782-6724. The collector then affixes the stamp or stamps to the cover (the stamps must be sufficient to cover the first-class postage rate) and addresses the cover to himself or to someone else. The address should be located in the lower half of the envelope to allow sufficient room for the postmark. Many collectors prefer an unaddressed FDC, so they use removable labels for the address.

The postmark is usually about 3½ inches long by 1 inch tall. Most of the time the postmark is placed so that it barely touches the bottom of the stamp. The stamp or stamps should be placed slightly away from the edges of the envelope to avoid damage to the edges of the stamp. Any multiple of stamps must include at least one of the newly issued stamps to receive the "First Day of Issue" cancellation.

The cover shown in Figure 7 bears the nondenominated (15¢) Woody Wagon stamp and the other five nondenominated stamps of the American Culture series: 10¢ Lion, 10¢ Atlas, 15¢ Tail Fin, 25¢ Juke Box and 25¢ Diner. The additional stamps serve not only to add interest to the cover but also to make up sufficient postage (and more) to cover the first-class rate.

When sending for the first-day cancel, it is a good idea to insert a stiffener of postal card thickness to provide a solid base for the postmark. Simply tuck in the flap of the envelope to keep the card in place. Put the FDC envelope into a larger envelope, and send it to be canceled. Make sure to affix sufficient postage on the outer envelope to allow for the weight of the cover or covers inside. Requests may be sent to: (Name of stamp issue), Postmaster, (City of issue, state, ZIP-9998).

For each U.S. new issue, specific addresses are published in the pages of Linn's.The address can be found in the box listing technical details within the new stamp issue story. The information also appears each week in Linn's U.S. Stamp Program.

The FDCs usually are shrink-wrapped, but they are returned in the regular mailstream, so it might be a good idea to send for several.

When producing your own FDCs, be sure to use quality envelopes with a high rag or cotton-fiber content and low acidity. Regular envelopes are made with cheaper paper, and they tend to yellow and become brittle with age.

FDCs can be mass-produced in the thousands by groups, or they can be one-of-a-kind creations by professionals or amateurs. The possibilities in first-day cover collecting are limited only by the imagination.