The governor of Colorado, to whom this letter was addressed, was just one of five state governors that the U.S. Postal Service was unable to locate in 1993.

This unusual military postal history cover was sent from an inmate in a Tennessee correctional institution to a sailor at U.S. Naval Facility Brawdy in Wales. 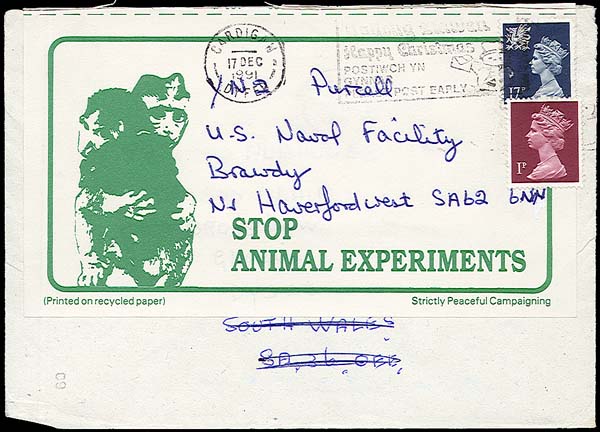 This letter sent to a sailor at a U.S. military base through a foreign postal system is dressed up by the use of an animal-rights activist label as an address label. 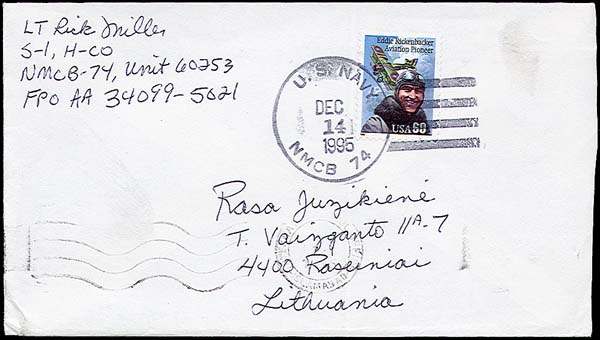 This MPO cover from Naval Mobile Construction Battalion 74 in Okinawa went astray to Islamabad, Pakistan, before delivery to Raseiniai, Lithuania. 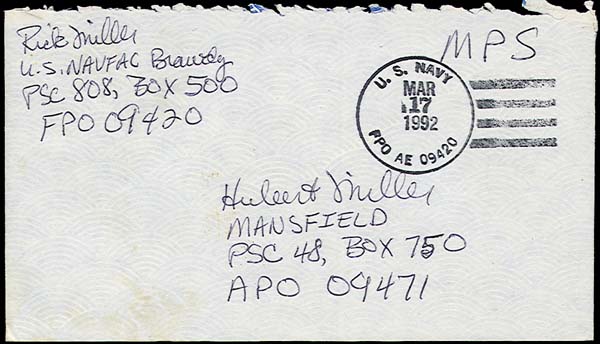 This intratheater stampless cover from U.S. Naval Facility Brawdy in Wales to the Mansfield dormitory at London Central High School in High Wycombe, England, went via the Military Postal System, not the U.S. Postal Service. 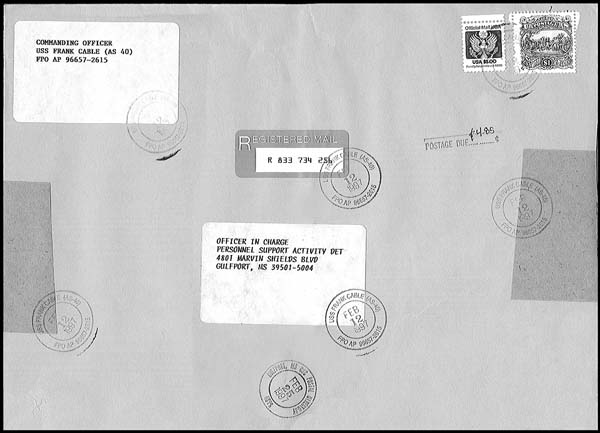 The first thing that comes to the mind when we hear the term "postal history" is probably the word "covers."

Covers (a cover can be any item that has passed through the mail) are certainly a big part of postal history. But postal history can also include postal forms and permits; postal equipment; the study of postal laws, treaties and rate tables; and anything that might have a bearing on postal rates or may account for the way a particular mailpiece was handled.

Stampless covers, either from the prestamp period or those that did not require a postage stamp for mailing, such as military free franks, are highly collectible. Postal history collections can also be formed from mailpieces franked with meter stamps or permit imprints and from postal stationery.

Postal history collections can be formed around covers showing proper postal rates or unusual points of origination or destinations. Covers with unusual etiquettes and markings also catch the eye and spark interest.

The U.S. Navy switched from using Official mail stamps to regular postage stamps on Official correspondence circa 1993. Mail clerks, however, were told to use up existing stocks of Official mail stamps, and it is possible to find covers with mixed Official and regular frankings well into the late 1990s.

A graphically cropped registered mail cover from the commanding officer of the USS Frank Cable (AS-40) to the officer in charge of personnel support activity detachment at Gulfport, Miss., is shown in Figure 2.

The cover was assessed $4.85 postage due when it arrived Feb. 27, 1997, at the Construction Battalion Center at Gulfport.

A type of modern stampless cover is shown in Figure 3.

Letters mailed overseas from one military post office to another military post office within the same theater of operations through the Military Postal System do not require postage stamps. Such letters, called intratheater mail, are handled exclusively by military postal clerks and do not enter the U.S. Postal Service mailstream.

I mailed the cover shown in Figure 3 from my duty station in Wales on March 17, 1992, to my son at the Mansfield dormitory of the Department of Defense school at High Wycombe, England.

Intratheater-mail covers, inscribed "MPS" in the upper-right corner of the envelopes, are much less common than mail inscribed "FREE" that was sent by American service personnel who have been given the franking privilege.

Covers mailed from overseas MPOs to destinations in the United States are relatively common.

Less common are covers from overseas MPOs mailed to foreign destinations, such as the one shown in Figure 4.

Posted Dec. 14, 1995, from Naval Mobile Construction Battalion 74 on deployment to Okinawa, it reached its destination in Raseiniai, Lithuania, on Jan. 17, 1996, after being misrouted to Islamabad, Pakistan, as shown by the machine cancel across the lower front of the cover.

The inverse of the MPO-to-foreign mailing occurs when a letter is mailed through a foreign post office to a U.S. military base, as is the case with the cover shown in Figure 5.

The cover was sent through the Royal Mail to a sailor at U.S. Naval Facility Brawdy in Wales using the base's British geographical address rather than its MPO address.

The cover is further enhanced by an animal-rights activist label, which the sender used to partially cover up an earlier botched attempt at addressing the envelope.

The green-on-white label shows a pair of monkeys clinging to each other in fear and the message "STOP ANIMAL EXPERIMENTS."

The cover shown in Figure 6 offers another unusual example of military postal history: a letter from a prison inmate to a serviceman serving overseas.

The letter is from a prisoner in the Northeast Correctional Center in Mountain City, Tenn., to a sailor stationed at U.S. Naval Facility Brawdy. The names of the sender and recipient have been graphically obscured.

The handstamp in blue ink at the cover's left reads: "This correspondence is from an inmate in a correctional institution. The Department of Corrections has neither censored nor inspected this item. Therefore, the Department does not assume responsibility for its contents. Northeast Correctional Center."

Is it possible for the Postal Service to be able to find the governor of any given state in order to deliver his mail, even if the address isn't quite right? Not always.

In May 1993, the commanding officer of U.S. Naval Facility Brawdy wrote letters to the governors of all 50 states requesting from each a state flag for use at the Naval Facility on ceremonial occasions.

The letters were addressed using the governors' addresses as listed in a military publication.

Five of the 50 letters, including the one shown in Figure 5 addressed to the governor of Colorado, came back marked, "RETURN TO SENDER, ADDRESSEE UNKNOWN."

The Postal Service was also unable to locate the governors of Rhode Island, Connecticut, West Virginia and Wyoming.

While the covers shown in this article are all American, collectors can and do collect and study the military postal history of all nations.