Have some fun with a funny stamp collection 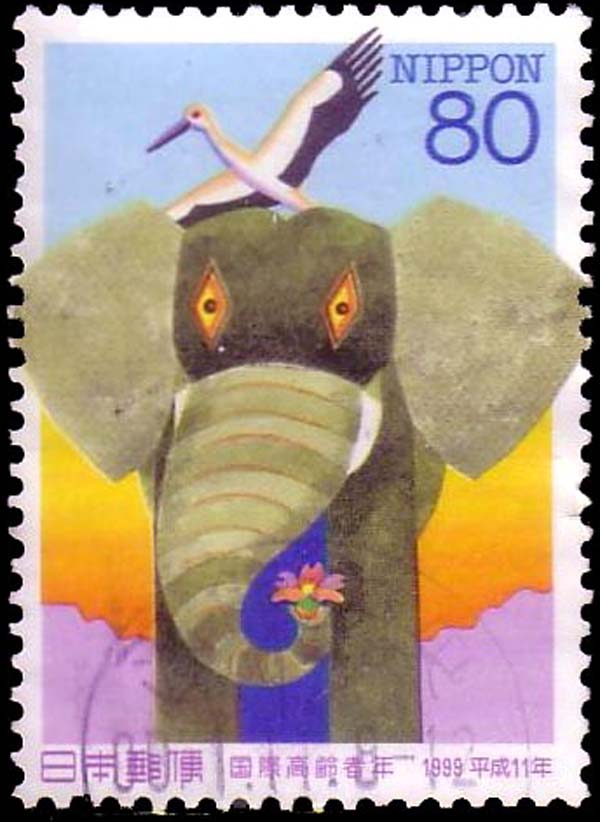 Figure 9. The elephant does not seem to object to the crane landing on his head on this Japanese stamp. Click on image to enlarge.

Figure 8. Although it really was not part of a joint stamp issue, this British stamp showing a water faucet seems to go together well with this German stamp showing a glass of water. Click on image to enlarge. 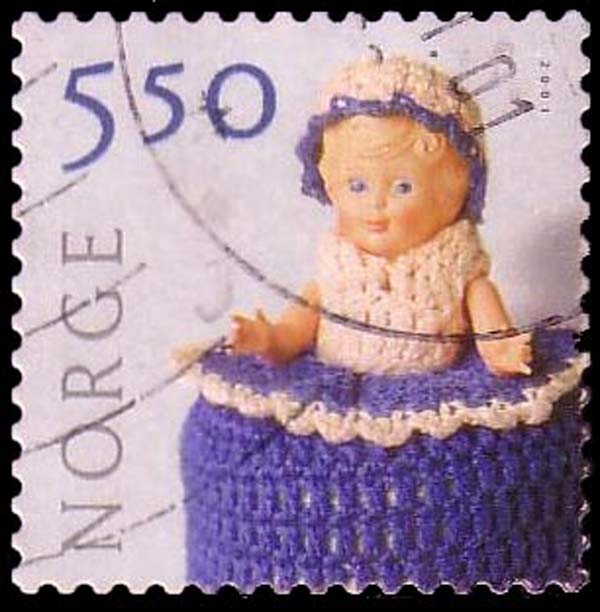 Figure 7. Is this Norwegian stamp meant to show a kitschy toilet paper holder, or does it just look like one? Click on image to enlarge. 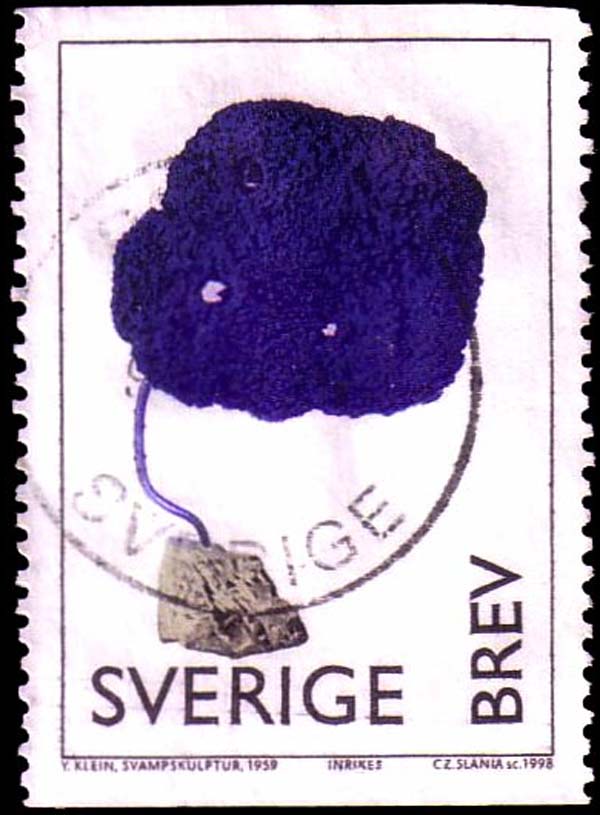 Figure 6. Large art pieces sometimes don't translate well in postage-stamp size, as is the case for this stamp picturing Swedish sculpture. Click on image to enlarge. 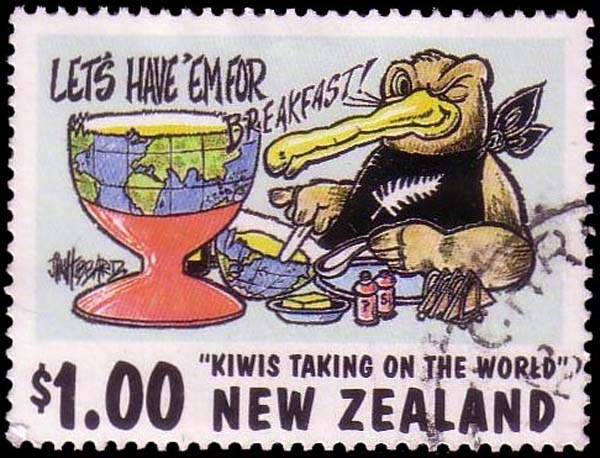 Figure 5. The subject of this stamp design from New Zealand is prowess in rugby, not world domination. Click on image to enlarge. 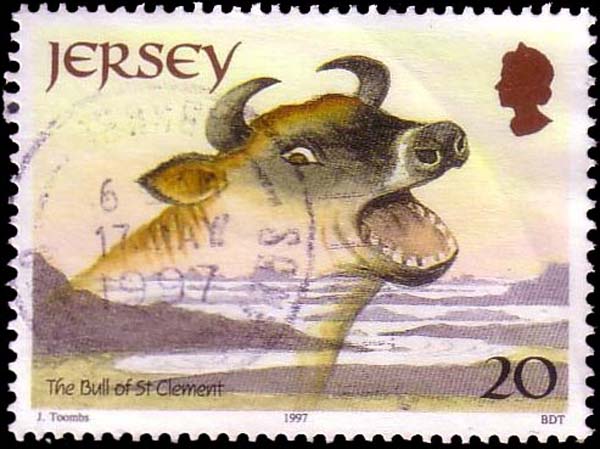 Figure 4. The ghostly bull on this stamp from Jersey seems to be saying "Holy cow!" Click on image to enlarge. 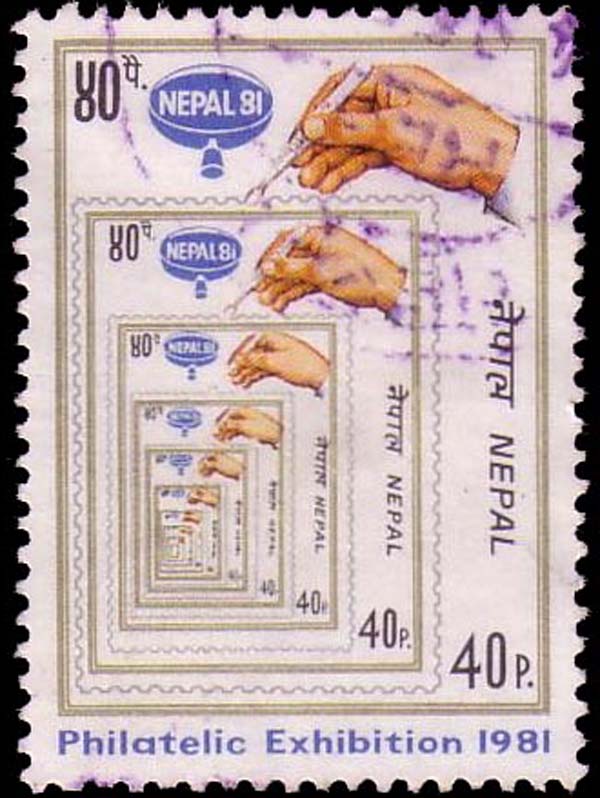 Figure 3. This stamp of Nepal pictures an infinite stamp-on-stamp design. Click on image to enlarge. 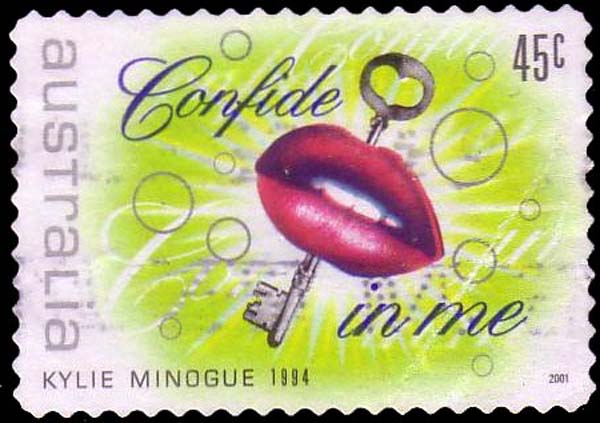 Figure 2. The words to a popular song sung by Kylie Minogue are illustrated on this Australian stamp. Click on image to enlarge. 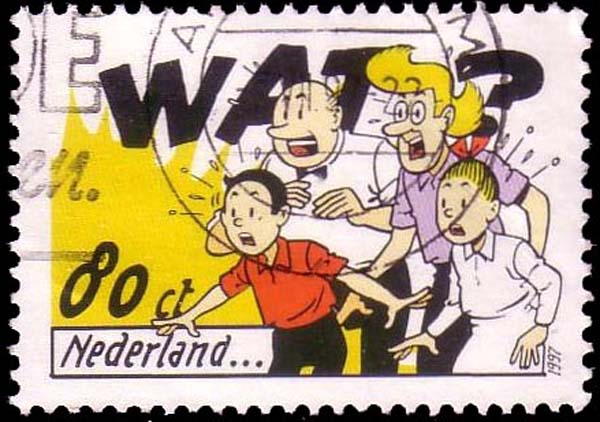 Figure 12. What does this "WAT?" stamp from the Netherlands signify? Click on image to enlarge. 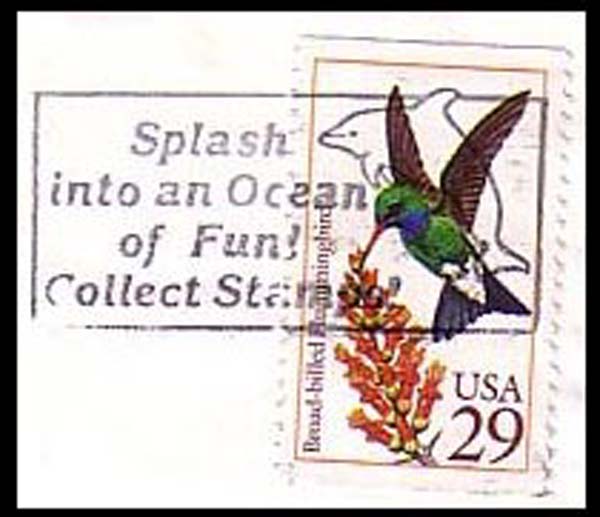 Figure 11. The dolphin in the cancel on this stamp jumps over the stamp's bird. Click on image to enlarge. 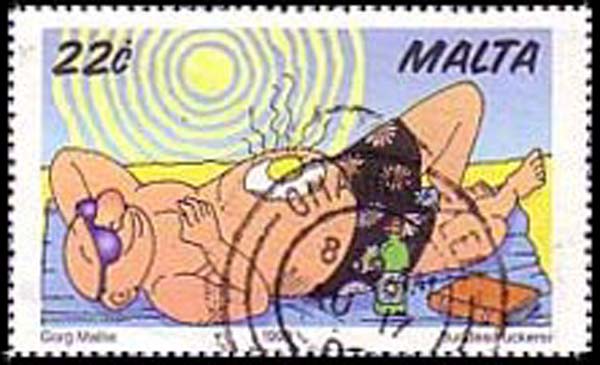 Figure 10. This stamp from Malta shows that the sun is hot enough to fry an egg, even on an unusual griddle. Click on image to enlarge. 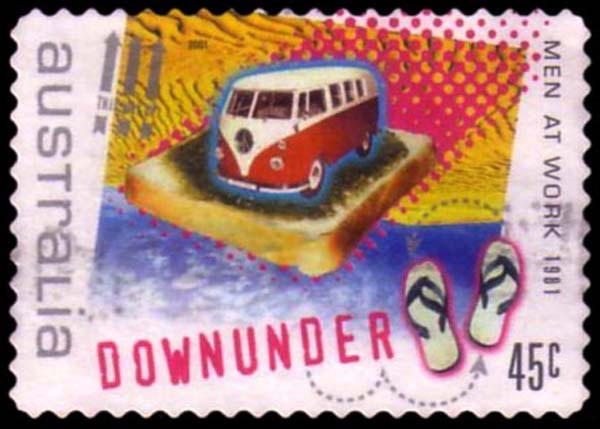 Figure 1. This Australian stamp illustrates the lyrics to a song by the Australian rock group Men at Work. Click on image to enlarge.
Previous
Next

Stamp collecting is supposed to be fun, but there are times when it ought to be more obvious. It seems as if some collectors get unnecessarily exercised about the subjects of new stamp issues, the sales policies of the United States Postal Service, the cost of supplies, the decisions made by hobby leaders or sundry other complaints.

Getting wrapped up in the cause du jour is a surefire way to lose sight of the maxim that stamp collecting is supposed to be fun.

When this happens to me, I quickly put things back into proper perspective by working on my fun collection.

Actually, all of my collections are fun, but one in particular never fails to tickle my funny bone.

The stamps included in this collection were selected because I found them to be humorous. Admittedly, I have a quirky-bordering-on-bizarre sense of humor, but anyone can form a collection similar to mine by using the same selection process and a sense of humor. If the stamp makes you chuckle, then it is fit for collecting.

Those people who are offended by the Postal Service's decision to issue commemorative stamps for controversial people such as Ayn Rand, Paul Robeson and Frieda Kahlo or by frivolous stamp subjects such as Bugs Bunny and Mickey Mouse might not find these subjects so objectionable when they look at the Australian stamp shown in Figure 1 (Scott 1952).

When I first found this stamp in a mixture spread out on tables at my local stamp club's stamp hunt, I hooted with mirth. I am sure a few members must have thought I had found an Inverted Jenny. The stamp made me laugh out loud, and it became a conversation piece. No one could understand why Australia would issue a stamp picturing a Volkswagen minibus on a piece of toast. If that wasn't odd enough, there was also a pair of beach sandals on the stamp.

It wasn't until I saw the "Men At Work" on the stamp that I remembered this was an Australian rock group that had a hit song titled Downunder. The stamp is illustrating the lyrics from the song, which go:

"Traveling in a fried-out combie, On a hippie trail, head full of zombie, I met a strange lady, she made me nervous, She took me in and gave me breakfast, And she said, 'Do you come from a land down under? Where women glow and men plunder? Can't you hear, can't you hear the thunder? You better run, you better take cover."

"Buying bread from a man in Brussels, He was six-foot-four and full of muscles.

I said, 'Do you speak-a my language?' He just smiled and gave me a Vegemite sandwich. And he said, "I come from a land down under, Where beer does flow and men chunder, Can't you hear, can't you hear the thunder? You better run, you better take cover."

This needs a little translation from Australian to American. A "combie" is a beach bus — usually a Volkswagen minibus that has been converted so that it can carry surfboards and a variety of other beach necessities.

A "Vegemite sandwich" (which is the toast you see on the stamp) is a sandwich made with the spread Vegemite. Vegemite is the brand name of a spread product. Vegemite is blackish in color and has the consistency of peanut butter. It is made from yeast extract and is very salty. Australians admit it is an acquired taste. When I was in Australia a few years ago, I tried it. I can report that it is a taste I did not acquire.

The illustrated-lyrics concept also explains the Australian stamp shown in Figure 2 (1945). Those lips superimposed over a key are illustrating the song Confide in Me by singer Kylie Minogue. The words to the chorus are, in part, "I can keep a secret, and throw away the key."

Anyone who has tried on clothing in a department store dressing room with three angled mirrors knows that, if angled properly, you can see an infinite number of images of yourself in the mirrors.

Shown in Figure 4 is a stamp from Jersey, an island in the English Channel that is not a part of the United Kingdom. It is a dependent territory (bailiwick) of the British monarch.

The island is noted for excellent milk-producing cows called, not surprisingly, jerseys. The stamp (796) shows a ghostly jersey bull with a very peculiar expression on his face. One has to wonder what his problem might be. He looks to me as though he is saying "Holy cow!"

The caption reads "The Bull of St. Clements." This refers to a so-called urban legend of Jersey. Years ago some fishermen in Jersey talked about a roaring bull that roamed around the rocks at St. Clements Beach.

This story, of course, frightened people so that they wouldn't go to the beach. Later an intrepid fisherman braving the legend discovered some rocks had eroded and formed a pipe. At low tide the water sucked down the pipe and made a gurgling noise that echoed off the rocks. The bull legend was de-mystified by his discovery, but we have a wild-eyed bull stamp by which to remember it.

New Zealand issued the stamp shown in Figure 5 (1473) that pictures a rather cocky cartoon of a New Zealand kiwi bird eating from a globe-like bowl with the caption "Let's Have 'Em for Breakfast" and "Kiwis taking on the world."

Figure 6 pictures another stamp that I acquired at my stamp club's periodic stamp hunt. It is a Swedish stamp (2263) that shows . . . well, what is that blue blob? It looks like a blue blob with eyes, but presumably it is a piece of sculpture. To me it will always be a blue blob on a stick, illustrating that some things are inappropriate subjects to be shrunk to stamp size.

Some stamp subjects border on the absurd. The stamp shown in Figure 7 may or may not be what I think it is. This Norwegian stamp (1306), picturing a doll with crocheted clothing, surely reminds me of the kitschy crocheted crafts that were popular in the 1950s when it somehow became fashionable to make toilet paper holders from yarn and dolls' heads. Now this may not be a toilet paper holder, but it sure looks like the one made by Aunt Mayme that graced my childhood bathroom.

Figure 8 shows two stamps that naturally seem to go together. The British stamp on the left (1864) shows a water tap, and the German stamp on the right (2126) illustrates a glass of water. Neither are subjects one would normally expect to see on a stamp, and yet here they are.

Japan issued a stamp that pictures a crane landing on the top of an elephant's head (2708), shown in Figure 9. Elephants, noted for their superior intelligence and ability to remember, would never be considered birdbrains, except maybe on this stamp.

Summertime is here, and many areas of the country are experiencing record heat. You have probably heard the expression about it being so hot that you can fry an egg on the sidewalk. If the Maltese stamp illustrated in Figure 10 (973) is any indication, it is hot enough in Malta to fry an egg on a sunbather's belly.

Cancels, especially those containing pictorial elements, can sometimes convert ordinary stamps into extraordinary stamps. Figure 11 shows one of the U.S. 29¢ Hummingbird stamps that was issued in a booklet of five different designs in 1992. The stamp on piece was canceled with a "Splash Into an Ocean of Fun! Collect Stamps!" slogan postmark.

The dolphin in that postmark looks as though it is participating in a new sport called synchronized flower-feeding.

Finally, Figure 12 displays a Netherlands stamp (959) that summarizes my reaction to many of the stamps in this specialized fun and funny collection: "WAT?"

The point is, stamp collecting is fun.

If it stops being fun, you aren't doing it right. Maybe the way to find the fun is to look for the funny. Happy (and fun) collecting!