How a single stamp led to a multination African adventure 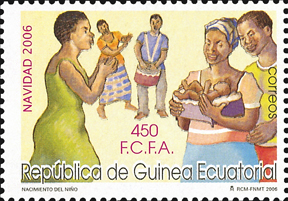 Figure 5. Spanish Guinea's independence in 1968 changed the country name on the stamps yet again. 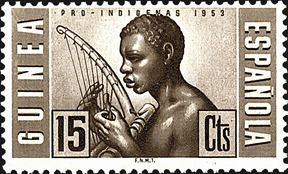 Figure 4. Beginning in 1951, the stamps were inscribed Guinea Espanola, as on this 1953 issue. 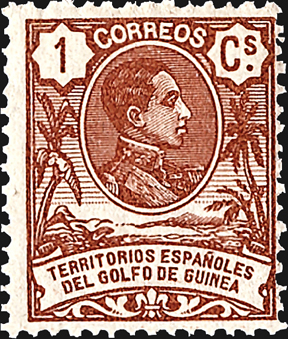 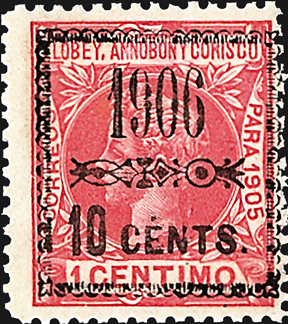 Figure 2. The 1905 stamps of Elobey, Annobon and Corisco were uprated with surcharges in 1906. 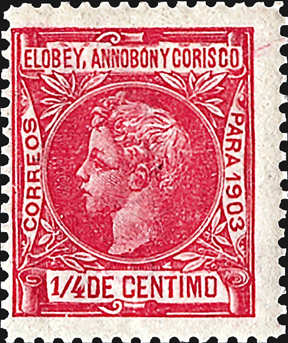 Figure 1. The first stamp of Elobey, Annobon and Corisco, issued in 1903.
Previous
Next

Stamp collectors are pretty good at geography. If asked where the Faeroe Islands are, we know the correct answer. We also know the location of the Falkland Islands, Nepal, the Azores and Heligoland.

Such a situation happened to me recently. I was putting some accumulated stamps into my worldwide albums and came across the carmine stamp shown in Figure 1, which sent me directly to my Merriam-Webster Geographical Dictionary.Nevertheless, sometimes a stamp will show up that leaves us stumped. What is the issuing country, and where is it located?

What are Elobey, Annobon and Corisco, and where are (or were) they?

The dictionary listed Elobey Islas, two islands in the Gulf of Guinea with a combined area of one square mile.

But what about Annobon and Corisco? The dictionary listing for Annobon sent me to Pagalu, which apparently is another name for the "small mountainous island in Gulf of Guinea, part of Equatorial Guinea." Compared with Elobey, Annobon/Pagalu is big, comprising seven square miles.

That left Corisco and its location. The dictionary had the answer: It, too, is part of Equatorial Guinea, in the Bight (bay) of Biafra and with a landmass of six square miles.

Elobey, Annobon and Corisco are now a part of Equatorial Guinea, located on Africa's west coast just above the equator, lying between Cameroon to the north and Gabon to the south.

But what were these three entities when my stamps were issued? And why did these little islands even need postage stamps? What was going on there? These mysterious islands needed some serious research!

The Internet provided recent images of tropical islands with smiling, celebrating citizens, pretty beaches and volcanic outcroppings. But, none of what I was finding online was delving into the history of these stamp-issuing islands, apart from the occasional mention of "Spanish Africa." That, at least, gave me a starting point.

I spent an entire day looking for information about the islands in encyclopedias, atlases and whatever reference sources I could find at home and in the local public library. As it turned out, the best information was in The Stamp Atlas by W. Raife Wellsted and Stuart Rossiter, with cartography by John Flower. This well-thumbed volume published in 1986 is an essential work in my personal library.

But even with a number of good references, it was still complicated. The story involves other stamp-issuing entities that are more familiar to worldwide collectors. I confess that I knew these stamps but not so much about places that issued them, including Fernando Po (now Bioko), Sao Tome and Principe and Rio Muni.

Annobon is located directly south of Sao Tome and Principe (a former Portuguese colony, now independent). Elobey and Corisco are both located close to the Equatorial Guinea coast.

Elobey, Annobon and Corisco were Portuguese territories until 1778, when they became Spanish colonies. They were useful to Spain as forts and trading outposts, largely in support of Spain's slave trade with the American colonies. The transfer of these territories from Portugal to Spain was the result of the Treaty of El Pardo that attempted to resolve differences between the two nations over territory primarily in South America.

Other foreign treaties gradually eroded large portions of Spain's African slave trade. The last treaty, in 1886, led Spain to finally end its slave trade to Cuba. Spain's African trading posts remained, but with little income or trade to support them.

The islands of Elobey, Annobon and Corisco jointly issued postage stamps from 1903 to 1909. Figure 1 shows the first of these issues, a ¼-centimo stamp with a portrait of Spain's King Alfonso XIII. These stamps were reissued in 1905 with that date in the banner on the right of the stamp.

And that was the end of Elobey, Annobon and Corisco stamps, numbered Scott 1-60, and listed in the Scott Classic Specialized Catalogue of Stamps and Covers 1840-1940.

What happened? Fernando Po, a Spanish colony, merged with Elobey, Annobon and Corisco, and, together with Rio Muni (which was already called Spanish Guinea), began using stamps inscribed Territorios Espanoles del Golfo de Guinea (Figure 3). As of 1951 the stamps were simply inscribed Guinea Espanola, as shown on Scott 324 in Figure 4, issued in 1953.

Rio Muni and Fernando Po also had stamps of their own for a time in the 1960s, prior to independence, but both provinces ceased issuing stamps when independence was declared.

Every stamp is an adventure, and some even more so than others. The investigating is fun, and can take you to surprising places.