How to mount mint self-adhesive stamps 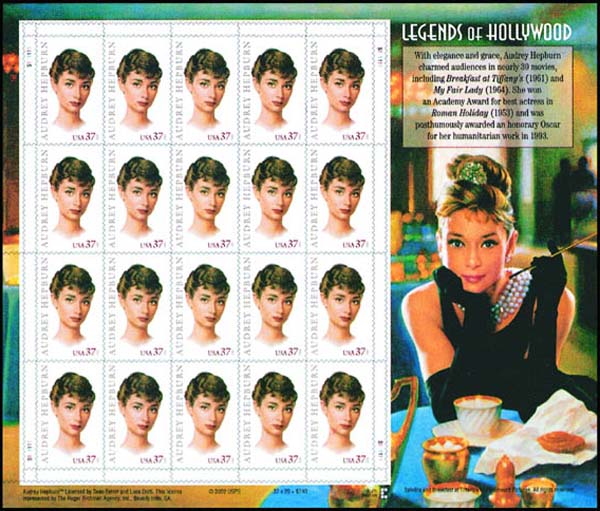 Figure 5. When there are pictures or information in the selvage, as with this pane of 37¢ Audrey Hepburn Legends of Hollywood stamps, collectors often want to save the entire pane. Click on image to enlarge. 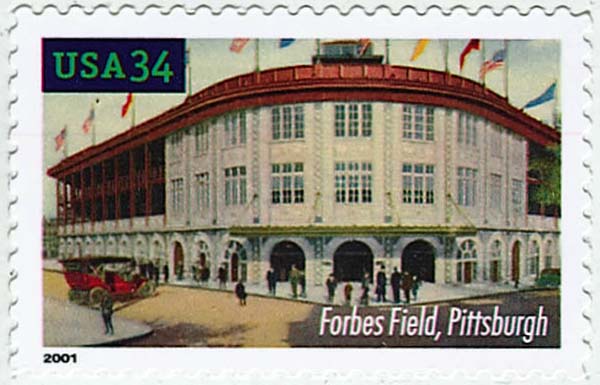 Figure 3. This 34¢ Forbes Field stamp (3515) was cut from its pane, leaving a small margin of backing paper all around the stamp. Click on image to enlarge. 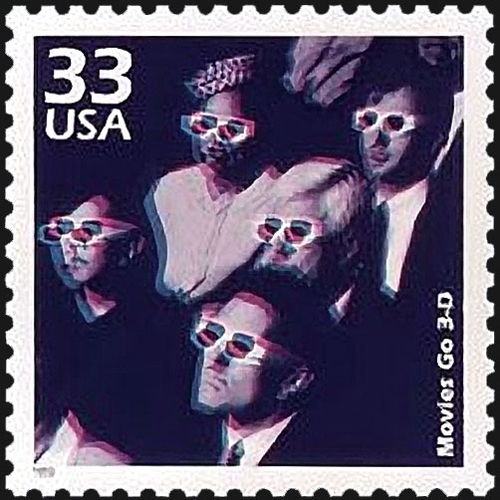 Hardly a week goes by that Linn's does not receive a letter from a perplexed collector wanting to know the right way to mount mint self-adhesive postage stamps.

I have to give away the secret right here at the beginning of the Refresher Course: the right way to mount them is the way that pleases you most and best meets your goals in stamp collecting.

After 164 years of postage stamps, there is now a general consensus on how to mount mint stamps with water-activated gum, but this consensus has evolved and changed over time.

At first, the stamps were licked and glued to album pages with their own gum. Later they were mounted by using a piece of selvage as a hinge. Next, hinges were produced specifically for mounting stamps. Finally, stamp mounts that did not disturb the gum on the back of the stamp were introduced. Then came hingeless albums.

Today, the consensus of the collecting opinion is to use mounts or hingeless albums to mount mint stamps that have never-hinged gum, although some collectors believe that hinges are still OK for unused stamps that have already been hinged.

At this stage, there is no universally accepted, hobby-wide-acclaimed method of mounting mint self-adhesive stamps. This is because collectors are trying to force a new medium (the self-stick stamps) to fit into an old box.

Here is an example of what I mean from outside of the stamp hobby. Probably most everyone has been in a room in an old building dating from the late 19th or early 20th centuries that had a stamped tin ceiling. You may have admired the ornate designs and wondered, "How did they get the idea of stamping those ornate designs into the tin."

The answer is, they were trying to make it look like something that it wasn't: plaster. Ornately carved plaster ceilings were a hallmark of the wealthy. They were expensive because all that hand carving was labor intensive and required skilled craftsmen.

Shortly after the Civil War, when someone got the idea of making ceilings out of tin, the maker could have chosen to design them flat and without relief decoration, or he could have decorated them in a completely different style from the plaster ceilings.

He chose, instead, to imitate the styles and forms of the medium that preceded it (plaster).

That is where we are with self-adhesive stamps. The medium has changed, but we are still trying to make it conform to the old styles of collecting and mounting.

The first United States self-adhesive stamp, shown in Figure 1, is the 10¢ Dove Weather Vane Christmas stamp, Scott 1552, issued in 1974. The stamp proved to be a collecting disaster. Water would not work to soak the adhesive from the stamp paper.

Also, the adhesive used on the experimental stamp was not stable. It bleeds through and discolors most of the unused stamps over time. Notice the mottled appearance of the Figure 1 stamp.

There were improvements in the adhesive laminate, which for U.S. stamps includes a water-soluble layer so that used stamps can be soaked off in water.

But no one knows for certain how long the adhesives on the newer self-stick stamps will last and what they will do to the stamp paper over time.

Self-adhesive stamps have really become common only in the past 10 years, so most of the stamps in collections are relatively new.

After 25 years will the adhesive turn to powder and flake off? If not after 25, how about after 50 years or after 100 years? If the adhesive gives up the ghost after 50 years, will postal history collectors have to reattach the stamps to their covers with hinges?

No one knows, so if you want to keep your stamps post office fresh, you must do all that you can to limit their exposure to environmental elements that might speed the process: air, moisture, overly acidic or overly alkaline storage materials, and light.

Because there is no right way to mount mint self-adhesives, what we can try to do is to figure out what is the best way for you to mount them, based on your collecting goals.

To preserve the stamps just as they were issued, you might best be served by placing them in stock books made with neutral materials and storing them in a dark, cool, dry place.

Do not open or unfold booklets; do not remove selvage or backing paper; and do not tear or cut stamps apart. In short, do not do anything to them that cannot be undone.

On the other hand, if your goal is to mount and display your stamps in a way that they can be viewed and appreciated, you will receive little satisfaction from storing them in a stock book and keeping it in a climate-controlled cave.

There are a number of options for mounting and displaying unused self-adhesive stamps, if you aren't particularly concerned about theoretical resale value.

One option is to stick the stamp on a piece of paper and soak it to remove the gum. This saves worrying about the adhesive destroying the stamp over time and allows the stamp to be mounted in an album with a hinge or a stamp mount, as you prefer.

With the ongoing 30-year mania for mint, never-hinged, original-gum classic stamps, this method is unlikely to appeal to collectors who think that their recent mint, self-adhesive stamps will one day be in demand in mint condition, just like the classics.

Another disadvantage of the soak-it method is that the stamp cannot readily be used for postage once the adhesive is removed. To use such a stamp for postage, you have to glue it to the envelope.

Another option is to mount a mint stamp with its adhesive and backing paper intact.

The 37¢ Mickey Mouse and Friends stamp shown in Figure 2, was torn from the pane along the die cuts in the backing paper.

The 34¢ Forbes Field self-adhesive stamp (3515) shown in Figure 3 was cut from its pane, leaving a small margin of backing paper all around the stamp.

What about collecting and mounting self-adhesive stamp multiples such as plate number blocks and se-tenant designs (different, attached designs)? Most collectors would probably collect and mount the four Art of Disney se-tenant stamps as a block rather than individual stamps, but this is entirely up to you.

Stamp multiples can be removed from the pane the same ways that single stamps are.

Souvenir booklets, such as the 2003 Old Glory booklet, can be collected as an intact booklet with its covers and informational pages, as individual stamps (3776-80), as a strip of five stamps (3780a) or as a booklet pane of 10 (3780b). The choice is entirely yours. You can also save the issue various ways. The U.S. Postal Service would certainly like that you save the stamps as singles, as multiples and as a complete booklet.

A booklet pane of 10 from the Old Glory booklet (3780b) is shown in Figure 4. If you chose to save a strip of five, or a booklet pane of 10, you again have to decide if you will tear or cut the stamps from the booklet. The Figure 4 pane was torn out.

Sometimes, even if there is only one stamp design in the pane, a collector might want to save the entire pane because of pictures or information in the pane's selvage. An example is the 37¢ Audrey Hepburn Legends of Hollywood stamp (3786). A pane of 20 is shown in Figure 5.

OK, you've made the decision of what format to save the stamps in and how to remove them from the pane. Now, how do you mount them in your album?

Single stamps can be mounted with stamp hinges, although larger multiples might be a problem.

However, if you are bothered by the fact that once a stamp has been hinged, it can never again be described as "never-hinged" (whether or not that will ever have any meaning regarding self-adhesive stamps), then don't use hinges to mount your stamps. Even if you apply hinges to the backing paper of a self-adhesive stamp, rather than to the back of the stamp, it will no longer be considered never-hinged.

Mounting mint self-adhesive stamps with the backing paper intact using stamp mounts is probably the most popular option. However, the backing paper contributes to album bulge, and you will find the number of binders required to hold your album pages multiplying rapidly.

Clear plastic protectors or sleeves is an option that might be attractive for larger items, such as panes. Just make sure that the materials you use are brands well-known for their quality.

What if the stamp multiple is bigger than the album page? The best option here is to use a large page and keep it in an even larger box or binder.

Folding part of it under or letting it partly hang off a normal page are other options.

In time, the collecting community will probably reach some consensus about how self-adhesive stamps should be collected and mounted. But that time has not yet arrived, so collect and mount the stamps the way that you find most pleasing in accordance with your collecting goals.

Thanks to Linn's reader Stephen R. Olsen of California for suggesting the subject of this Refresher Course.