How to track down the killers on your stamps 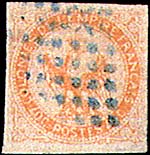 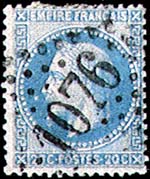 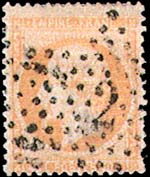 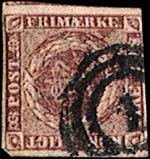 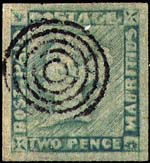 But some ink cancels proved to be relatively easy to erase or wash out and dates were often not clear, so other methods of cancellation were sought.

In the United States, some private and local carriers, such as D.O. Blood & Co., used acid to deface their stamps and prevent re-use.

One experimental handstamp used in the United States included a ring of sharp metal that cut out a piece of the stamp as it canceled it.

In Afghanistan during 1871-91, the postmaster canceled stamps as he affixed them by tearing off a small piece of the stamp, including biting it off, and discarding it.

The grilled stamps issued by the United States during 1867-71 were another attempt to solve the cancellation and revenue-protection problem.

The grilling devices had sharp ridges or raised bosses that were pressed into the stamp's paper breaking the fibers to allow a cancel's ink to penetrate more deeply, which prevented washing out the cancellation.

Ultimately the problem of stamp cancellation was solved by the adoption of killer cancels.

Killers are inked devices that cancel a stamp heavily enough that there is no possibility of the ink being washed out and the stamp being re-used.

A plain cork could sometimes put so much ink on the stamp that postal workers couldn't tell if the letter was properly franked, so postmasters began to carve patterns and designs into the cork cancelers to reduce the amount of ink transferred to the stamp.

The more artistic postmasters began turning their cancellation corks into minor pieces of art, resulting in the many fancy killers so dear to the collector's heart today.

After reading my Refresher Course on cancels and postmarks in the Dec. 30, 2002,Linn's, Ted Showers sent me some examples from his collection of numbered shoe-print killers on U.S. stamps.

Three of his U.S. stamps that bear shoe-print cancels numbered 1 through 3 are shown in Figure 1.

This type of barred elliptical killer was invented by John Goldsborough of Philadelphia. It combined the postmark and cancel in a single handstamp device called a duplex. These cancels were first used in New York beginning in 1875 and quickly became the most widely used commercially produced cancellation device in the United States.

At the center of the cancel was a number, a letter or letters or a geometric shape. These identified the postal worker, shift, position or branch by which or where the cancel was used.

The barred elliptical cancel numbered "789" was used only by the American Expeditionary Force in France in World War I.

With notable exceptions, the numbers or letters of cancellation devices used in the United States do not carry information that can be used to identify the place of origin.

The same is not true of many European killer cancels.

For many European countries and their colonies, numerical killer cancels can be used to identify the town or post office where the cancellation was applied.

This information is of great use to stamp collectors because off-cover loose stamps that didn't happen to catch the postmark can be traced to their place of use by the cancel.

These killer cancels consisted of a number at the center of concentric rings or grids of bars or dots.

Baden, Bavaria, Denmark and Russia used concentric ring cancels with numbers designating the town or post office where they were applied.

Concentric-ring cancels are sometimes incorrectly called target cancels. True target cancels have a bull's-eye at the center rather than a numeral or letters.

A Mauritius 2-penny gray-blue on bluish paper Queen Victoria stamp, Stanley Gibbons 21, with a target cancel is shown in Figure 2.

A Baden 6-kreuzer Prussian blue Numeral stamp, Scott 22a, with a "109" concentric ring cancel from Pforzheim is shown in Figure 3.

Old editions of the German-language Michel Germany Specialized Catalog contain lists of number cancels for German states with the towns or post offices that they were used by.

This information was dropped in the 1999 and subsequent editions of the catalog, but you might be able to pick up an earlier edition relatively cheaply that has these lists.

Specialized collectors will pay a premium above the stamp's basic value for legible numeral cancels. For uncommon cancels, this premium can be many times more than the value of the stamp.

Most numeral cancels are in black ink, but those in red, blue or green ink bring additional premiums.

Just as with the stamps themselves, the condition or quality of the cancel is important. Cancels with complete rings and clear, easily readable numbers are the most desirable.

Those with partial rings and blurred, but still identifiable numbers are less so. Cancels in which the number is illegible do not add additional value to the stamp.

Lists of Danish numeral cancels and their towns or post offices can be found in the Scandinavian Facit Special catalog as well as in Denmark's Numeral Cancellations 1852-1884 by Henry E. Tester and Glenn F. Hansen.

The Tester-Hansen book has the advantage of detailed maps useful in locating smaller villages and towns as well as much more detailed information about the cancellations.

The most common Danish concentric-ring numeral cancel is No. 1, assigned to the capital, Copenhagen.

The rarest Danish concentric-ring cancel is "102," from the non-account-keeping sub-post office of Gudhjem on the island of Bornholm.

Bornholm is the easternmost part of Denmark, a small island off the southeastern tip of Sweden in the Baltic Sea. The scant population and outlandish location of the sub-post office that used the "102" cancel account for its scarcity and value.

Another type of numeral killer cancel is the roughly diamond-shape pattern of dots, called a lozenge cancellation, used by France.

Beginning in 1852, the cancellations used in Paris were distinct from those used in the rest of France. The Paris Central Bureau used a six-pointed star made up of dots. Paris District offices used a lozenge of dots with letters or letters and numerals.

Cancellations for the rest of France used the lozenge of dots with numerals.

A listing of French numeral cancellations can be found in the Check List of the Numeral Cancellations used by the Post Offices of France by Brainerd Kremer.

The Paris District lozenge with letter or letter-and-numeral cancels were replaced with six-pointed-star-with-numeral cancels. Many of these were reassigned between district offices over the years.

A 40-centime orange Louis Napoleon stamp, Scott 27, with a Paris District six-pointed star numeral 2 cancel is shown in Figure 5. The numeral "2" indicates either the Rue Bourdaloue, Rue St. Lazare or Rue Milton office, depending on when it was used.

Whether a given cancel has small or large numerals is crucial. All numbers except 1, 2 and 3 (Abbeville, Ablis and Ablon) were changed when the new cancellation devices were distributed.

Additional information on French cancellations can be found in The Cancellations on French Stamps of the Classic Issues 1849-1876 by Raoul Lesgor and Meade Minnigerode.

During 1860-76 the stamps of French colonies were also canceled with lozenge killers. After 1864, some killer cancels had letters at the center of the lozenge that stood for the colony, such as "SPM" for St. Pierre et Miquelon, "GAB" for Gabon and "CCH" for Cochin China.

Mute lozenge killers used earlier and in those colonies that never received cancelers with letters can be identified by the shape, size and number of the dots in the lozenge.

These are identified in A Key to the Lozenge Obliterators of French Colonies, 1860-1892 by Robert G. Stone and in French Colonies: the General Issues by the same author.

The cancel on the French Colonies 40c orange on yellowish paper Eagle and Crown stamp, Scott 5, shown in Figure 7, is either type 4 from Pointe-a-Pitre and Basse Terre, Guadaloupe, or type 5 from Papeete, Tahiti.

The guides advise that type 4 shows great variation from wear and that type 5 is extremely rare, so if I really want to know which cancel it is, I should send it for expertization.

If it is the Papeete cancel, it would certainly be worth the effort to have it expertized.

The challenge of tracking down the killers on your stamps can be as exciting as a nail-biting episode of the best crime-investigation shows on television. And there is always the chance that you might find something of great value.