Innovations range from particular to offbeat 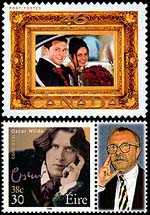 Figure 2. Stamps with embossing (top) and 3-D effects (bottom) were issued by several nations during the 1960s and 1970s.

Figure 1. This self-adhesive cut-to-shape Banana stamp from the island nation of Tonga was issued years before the United States began experimenting with self-adhesive stamps.
Previous
Next

If you go to the post office and ask for stamps, you're likely to get something simple, small and rectangular to put on your outgoing mail. Every country sells stamps that fit that description because most mailers certainly don't want to be bothered with complicated postage stamps.

Even so, stamps that are printed and sold today have a number of innovations that make them much different from the world's first postage stamps. You won't have to pull out a pair of scissors to cut apart the stamps you buy today, but the earliest stamps sold by countries around the world didn't have perforations or die cuts to separate them.

Chances are good that a stamp you buy today will be self-adhesive, which means you won't have to lick the gum on the back to make it stick to your mail. In its 1999 annual report, the United States Postal Service claimed that more than 37 billion U.S. stamps were printed that fiscal year and that 93 percent of them were self-adhesive.

The first self-adhesive stamps were issued by the small South Pacific island nation of Tonga in 1963, more than 10 years before the United States began experimenting with self-adhesive stamps in 1974. The Tongan stamps pictured coins and were shaped like them. The self-adhesive issues of Tonga made sense for a country with a tropical climate. Lick-and-stick gum on stamps can be activated by high humidity, causing the stamps to stick to each other. Self-adhesive stamps on liner paper are less likely to be spoiled by environmental conditions.

Collectors at the time considered Tonga's self-adhesives to be nothing more than an oddball novelty. Not only were the stamps self-adhesive, they were printed on embossed gilt foil cut in round shapes to simulate and commemorate the first gold coinage of Polynesia. Within a few years Tonga was issuing self-adhesive stamps printed on paper, but still cut into various shapes, such as the Banana stamp shown in Figure 1 (Scott 297).

Tonga's foil stamps were not the first produced on metallic material, by the way. Hungary created an engraved airmail stamp in 1955 that was produced on aluminum foil (C167). Appropriately, the stamp marked 20 years of aluminum production in that country.

Tonga's round stamps may have been oddities in 1963, but the idea of a round stamp has been copied by several countries since then. Malaysia, which had previously issued stamps in the shapes of triangles and trapezoids, created two circular perforated stamps in 1971 (82-83) to mark a bank office opening. The United States plans to issue its first circular stamp July 7 as part of its Space Achievement and Exploration issue.

The country of Bhutan in the eastern Himalayas offered circular gilt-foil stamps in 1966, but it went one step further in 1973 with the release of round postage stamps that doubled as tiny phonograph records (152-152F). The recordings on the various stamps included a spoken history of Bhutan, folk songs and the national anthem.

Bhutan also experimented with embossing, and it used heat-molded plastic to create other postage stamps. At top in Figure 2 is a 1972 stamp from Bhutan reproducing Leonardo da Vinci's famous Mona Lisa (144B). The stamp is embossed to simulate the artist's brushstrokes in the painting.

Bhutan also sold stamps during the 1960s and 1970s that featured a prismatic plastic overlay to create the optical illusion of a three-dimensional design. Similar stamps were also sold on behalf of the Mutawakelite Kingdom of Yemen. The example depicting a toy bull shown at bottom in Figure 2 was issued in 1970.

You won't find that Toy Bull stamp in many stamp catalogs, however. The British Stanley Gibbons stamp catalog questions the regular postage use of these and similar stamps from the Mutawakelite Kingdom of Yemen, though some are listed in the catalog's appendix. The Scott catalog, almost certainly for the same reason, does not list or mention them at all.

In this way, stamp catalogs can help collectors determine the postal validity of items that appear to be postage stamps but perhaps are not. That can be particularly useful when examining stamps with unusual features. Catalog researchers generally demand proof that stamps are issued throughout the country of origin and are created to fulfill a postal need.

The optical oddities of the Bhutanese and Yemeni stamps still seem unusual decades later, but postal authorities around the world continue to create eye-catching designs to intrigue potential stamp buyers. The prismatic 3-D stamps of the 1960s have been replaced by hologram designs that first appeared in 1988. Lasers are used to create the hologram, which conveys a silvery three-dimensional image with rainbow highlights on a two-dimensional surface.

Poland's 1991 holographic butterfly stamp (3056) was sold in the souvenir sheet shown in Figure 3. By 1999 more than 20 countries had created hologram stamps or postal stationery.

Other stamps that trick the eye are less flashy than the hologram but still create an interesting optical illusion. Italy created two red and green stamps in 1956 that appeared to show a three-dimensional image when viewed through red and green lenses, Scott 718-19. The stamps commemorated Italy's admission to the United Nations.

Guernsey, located in the English Channel and a dependent territory of Great Britain, issued two stamps in 1995 that seem to show flocks of simply drawn doves.

However, the stamps each contain another image hidden within the doves pattern of the design. To see it, the viewer must hold the stamp about one foot away from his eyes while focusing his vision at a greater distance. Conjuring up this hidden image requires some ocular dexterity that not everyone possesses. The 25-penny stamp, Scott 551, is shown at the top of Figure 4.

The French island territory of New Caledonia issued a set of five stamps Dec. 17, 1994, that provide an unusual optical effect using a principal similar to Guernsey's Doves issue. The stamps, Scott 706a-e, are shown at the bottom of Figure 4.

Although they may all look alike at first glance, closer examination shows that several design elements move in location from stamp to stamp, such as the palm tree near the bottom of the design or the bell near the top. Once again it takes the dislocation of your vision focus to create the 3-D illusion.

A different development in unusual postage stamps occurred in 1994 when Canada issued its first Greetings postage stamps with a circular cutout. Mailers could insert a colorful label supplied with the stamps to create the design of their choice. Some mailers inserted their own decorative elements, in essence designing their own stamps.

Canada Post took its own idea one step further April 28, 2000, when it issued new Greetings stamps in the shape of a picture frame. Customers can again choose to use stickers supplied by Canada Post to complete the design, or for a fee they may submit a photograph that will be transformed into appropriately sized stickers to use with the frame stamp. A personalized example is shown at the top of Figure 5.

Personalization of another kind was instituted by Australia Post in 1999 when it transferred digital snapshots of visitors to the Australia 99 stamp exhibition onto blank labels adjoining its 45¢ Polly Woodside ship stamps.

The Irish Post Office provided a similar opportunity in May at the Stamp Show 2000 in London, England. The bottom of Figure 5 shows the image of Linn's editor-publisher Michael Laurence on a tab adjacent to the 30-penny Oscar Wilde stamp issued May 22.

Postal authorities continue to develop design innovations in hopes of capturing the interest of stamp collectors, or of those who may be drawn to stamp collecting by these unusual issues.

Many innovative stamps rarely see postal use, though most are fully valid for that service. Instead, they are usually sold to collectors, creating income for the issuing postal authority for a mailing service it doesn't have to provide.

Because stamps designed with collectors in mind are profit-makers for the issuing postal authority, those who enjoy some of the stranger issues of the world will likely never run out of stamps to collect.