Although these stamps from Czech Republic, Ireland and Finland all share the same basic design, they are considered part of an omnibus series, rather than joint issues. 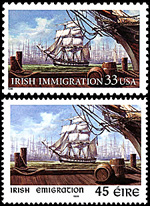 Joint issue stamps are from two or more countries. The stamps often resemble one another and may be issued on the same day.
Previous
Next

A story on page 1 of this issue of Linn's Stamp News tells of a new joint stamp issue from the United States and Sweden to commemorate the 100th anniversary of the first awarding of the Nobel Prizes.

Alfred Nobel was born in Stockholm, which is where the prizes are awarded each year, so it's natural that Sweden would want to issue a Nobel Prize stamp.Discussions and negotiations between officials of the U.S. Postal Service and Sweden Post over the course of nearly two years eventually resulted in an agreement that both countries would issue Nobel Prize Centenary stamps sharing a similar design.

Both countries could have issued Nobel Prize stamps independent of one another, but by agreeing to create a joint stamp issue, the postal authorities of Sweden and the United States exhibit the type of international cooperation that is characteristic of the spirit of the Nobel Prizes.

Joint issues are the result of a specific agreement between two or more nations to commemorate a person or event with new postage stamps from each country.

The joint issue stamps are usually issued on the same day or within a few days of each other, and often the stamps will share a similar design.

Most frequently only two countries participate in a joint issue, although on occasion joint issues will involve three or more nations.

Prior to the Nobel Prize Centenary joint issue, the United States most recently participated in a joint issue with Ireland in 1999.

Once again, the joint issue was the result of an official agreement between the postal authorities representing the two countries involved.

Such agreements may include officials from one country attending the first-day ceremony for the stamp in the other country, and even sales of both stamps through the sales agencies of the participating countries.

The United States has participated in numerous joint stamp issues with many different countries, including Canada, Mexico, Morocco, Russia and China.

The Nobel Prize joint issue will mark the fourth time that Sweden and the United States have issued stamps jointly.

A complete list of all official U.S. joint issues appears in the box below.

Joint issues are not necessarily exclusive to postage stamps. In 1986 the United States issued a 14¢ postal card to honor Francis Vigo, an Italian-born soldier and patriot of the Revolutionary War. A 450-lira postal card for the same subject and bearing the same design was issued the same day by the postal authorities in Italy.

Just because stamps are joint issues doesn't necessarily mean that the stamps will look a lot alike. Some stamps that are official joint issues may have designs that are considerably different from one another.

That's true, for instance, for the Endangered Species stamps issued in 1996 by the United States and Mexico. Although the topic was the same, the U.S. and Mexican stamps did not resemble each other at all.

The U.S. stamps were issued as a pane of 15 stamps with 15 different designs, each featuring a photograph of the endangered animal and its name.

The Mexican counterpart consists of 24 stamps that together make a large painting that shows dozens of animals. Each stamp shows several creatures and includes their names in small type.

From time to time collectors notice stamps from two or more different countries that commemorate the same subject, and may even resemble each other, but that turn out not to be official joint issues.

Sometimes the similar issues are simply coincidence, or the result of two countries marking the same subject on an appropriate anniversary. If there was no specific agreement between the countries to issue the stamps in unison, then they are not considered to be joint issues.

However, many collectors enjoy discovering stamps of similar design and obtain them to create collections of what may be called "stamp twins."

Sometimes similar stamps are part of what is known as an omnibus issue, when many countries decide to mark a specific theme, either by sharing a similar design or by picturing related subjects. The annual Europa series stamps issued by member countries of PostEurop are an example of this.

Usually these European countries each issue one or two stamps with a subject that fits a specified theme. The stamps from all of these nations are tied together by that theme and the word "Europa" printed on the stamps.

In 2000 many of these nations issued stamps sharing a single design, as shown by the three stamps pictured in Figure 2 from Czech Republic, Ireland and Finland.

The opening pages of the Scott Standard Postage Stamp Catalogue include a section titled "Common Design Types" where many omnibus issues are listed and illustrated.

As you might expect, many joint issues involve countries other than the United States. For example, Sweden and China participated in a joint stamp issue in 1997: both countries issued two stamps picturing pheasants.

As postal authorities look for new ways to make their stamps attention-getting or innovative, collectors have found some unusual joint-issue twists.

The countries of San Marino and Italy, for example, produced a small pane in 1994 that contained two stamps, one from each country to mark the 900th anniversary of the Basilica of St. Mark. Each stamp could be used for postage only in the country named on the stamp.

There are even examples when the two issuing countries jointly issued one stamp with both country names on it. Figure 3 shows a single 1995 stamp issued by both Switzerland and Liechtenstein to celebrate the 75th anniversary of a postal treaty between the two nations.

The denomination "60" on the stamp refers to 60 centimes in Switzerland and 60 rappen in Liechtenstein. In this case, the single stamp could be used for postage in either country.