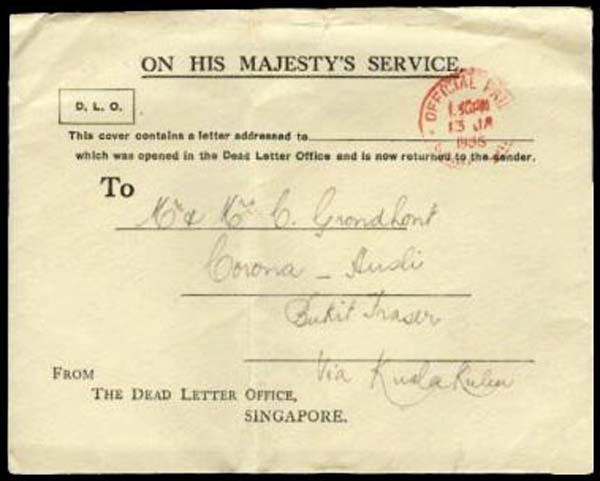 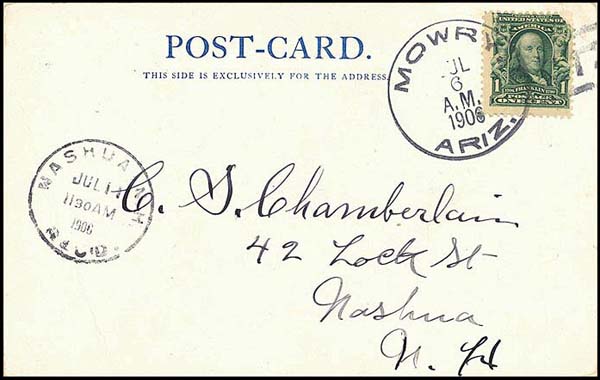 Figure 3. This postcard was mailed from Mowry, Ariz., a DPO (discontinued post office). The receiving handstamp struck at the left side of the card is a CDS (circular datestamp). Click on image to enlarge.
Previous
Next

An acronym is a word formed from the initial letter of each of the successive parts of a compound term.

Some acronyms, for example, scuba, radar, sonar and snafu, have become so commonly used as a unit that many people no longer realize that they are acronyms.

Acronyms are a sort of verbal shorthand. (In this age of electronic transcription, how many generations will pass before no one remembers what shorthand was?)

Using an acronym saves breath, energy and time, as long as both the person using the acronym and the hearer or reader understand what the acronym means.

Stamp collecting is full of acronyms. Their usage saves the experienced collector time and effort, but they can be baffling to someone just coming into the hobby.

Here are a few of the more commonly used stamp collecting acronyms.

APO — "Army post office" or "air force post office." This acronym comes from the military, an institution known for spitting out acronyms the way the winning contestant spits out seeds at a watermelon eating contest.

An APO is an official United States post office established for use by U.S. forces abroad. APOs are set up to distribute mail to and from military personnel who are not regularly served by U.S. civilian post offices.

FPO can also be used to mean "field post office," a term used to describe foreign equivalents of the American APO.

The denomination of an ATM stamp is printed at the time the stamp is vended.

ATMs often have elaborate designs similar to traditional adhesive postage stamps. They have become increasingly popular in some countries, notably Costa Rica, Finland and Spain. At present, foreign ATMs are beyond the scope of the Scott stamp catalogs.

BOB — "Back of the book." Any postage stamp issued for something other than regular postage.

CDS — "Circular datestamp." A circular postmark containing the date and, usually, the place of mailing. A CDS used at the left or bottom or on the back of a cover is a transit marking or a receiving marking. A handstamped CDS receiving postmark is visible at the left of the postcard shown in Figure 3.

CTO — "Canceled to order." CTOs are stamps that are officially canceled without performing postal duty. CTOs are usually sold at a steep discount from face value to dealers and collectors. Sometimes the postmark that invalidates the stamp as postage is printed at the same time as the stamp.

Once a staple of the packet trade, CTOs typically have full gum and are generally less desirable than either a mint or a postally used example of the same stamp.

DPO — "Discontinued or renamed post office." A DPO is a post office that is no longer in service or is in service under another name.

DLO — "Dead letter office." Undeliverable mail is sent to a DLO where it is opened and examined for a return address or a better delivery address.

An Official Singapore DLO cover used to return undeliverable mail is shown in Figure 5. The boxed letters, "D.L.O." are printed at the upper left of the cover.

An EDU generally applies to stamps issued in the 19th and early 20th centuries that did not have a formal first day of issue, and which might have arrived at different post offices at different times.

Linn's does not use the term EDU, but uses EKU for "earliest known use" to signify the earliest known use of a stamp, even if it was before it was officially issued for postage. An EDU for a classic postage stamp, as listed in the Scott catalog, can have significant value. An EKU for a contemporary postage stamp used before it was officially issued is certainly interesting and collectible, but generally it is of no great value.

An error is the result of a major mistake in the production of a stamp. Production errors include imperforate or imperforate-between varieties, missing or incorrect colors, and inversion or doubling of part of the design or overprint.

Major errors are usually far scarcer than normal varieties of the same stamp. They have higher catalog values and are eagerly sought by some collectors.

A freak is an abnormal, usually nonrepetitive occurrence in the production of stamps that results in a variation from the normal stamp but that falls short of producing an error. Many freaks are unique, but they are generally less valuable than errors.

Freaks are typically the result of paper folds, overinking or perforation shifts.

An oddity is a catch-all term that can be used to describe anything of a philatelic nature that is not a normal postage stamp, error or freak.

FDC — "First-day cover." An FDC bears a stamp and is postmarked with a first-day-of-issue cancel for the stamp.

FDCs can be cacheted or uncacheted and addressed or unaddressed. FDCs created by and for collectors might never have seen postal duty and might have been dated by the postal service up to a month or more after the first day of issue.

An unofficial-city FDC is one canceled on the first day of issue at a city other than the one in which the stamp was officially released.

FDOI — "First day of issue," which is the date on which the stamp was officially issued for postal service. In the United States, a stamp is usually sold in only one city on its FDOI. In many other countries, stamps go on sale nationwide on the FDOI.

IRC — "International reply coupon." IRCs are redeemable certificates issued by member nations of the Universal Postal Union to provide for return postage from recipients in other countries. IRCs are exchangeable for postage at a post office.

MPP — "Mailer's permit postmark." A permit to use an MPP may be issued upon application by the U.S. Postal Service. There is no fee for the permit. The permit authorizes the holder to cancel the postage on his own mail prior to submitting it to the post office for delivery.

MPPs are made with a rubber-stamp postmarking device obtained by the permit holder in compliance with postal regulations.

The cover shown in Figure 6 bears an MPP for permit No. 178 issued at Tempe, Ariz.

PNC — "Plate number coil." A PNC is a United States coil stamp that shows the plate number, usually at the bottom of the stamp design. A 1¢ violet Omnibus PNC (plate number coil) stamp is shown in Figure 7.

Philatelic acronyms can save you time and effort. Just remember to take the time and effort to spell them out for beginners who might not be familiar with them.