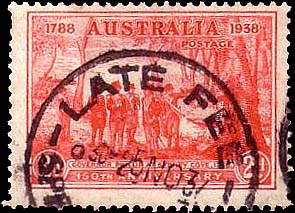 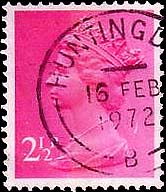 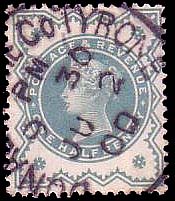 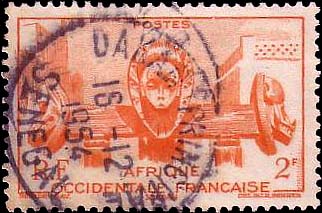 Figure 4. The Dakar postmark on this Senegalese stamp is dated Dec. 18, 1954. Click on image to enlarge. 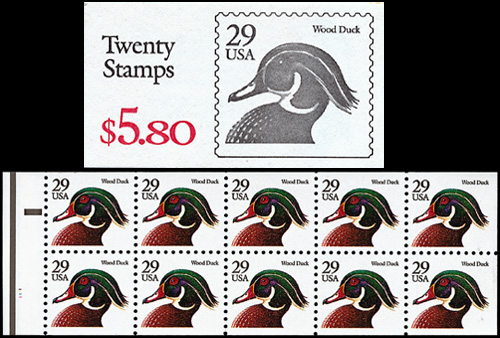 Figure 3. This Tasmanian stamp bears a Hobart postmark dated Aug. 3, 1909, at 7 a.m. Click on image to enlarge.
Previous
Next

At this time of year many collectors are busy transferring doctor appointments, birthdays to remember, stamp shows to go to, and other dates of significance from scraps of paper to a new 2007 wall calendar.

Have you ever thought about turning your old wall calendar into a stamp album?

A wall calendar has weeks and days divided into blocks where you can write a reminder about what you have to do that day.

Instead of writing the reminder, you could mount a stamp canceled on the month and day.

Your calendar could become a postmark collection of stamps with socked-on-the-nose (bull's-eye) cancels with legible dates.

You can add more challenge by limiting the collection to cancellations from a specific year or one country.

For example, you could include only dates from the year of your birth, or you could restrict it to only cancellations from the United States or Germany.

But I think that the most fun would be to use stamps from the entire world and any year. Think of the fun you can have looking through nickel boxes at shows, mixtures and your duplicates for legible date cancels. Every used stamp is potentially solid gold for this kind of collection.

The tools are simple. Without question the most important piece of equipment you need is a portable checklist to keep track of the dates that you need. I'll bet you have one in your purse or wallet.

I am sure that you have seen pocket calendars that measure about 3 inches by 4 inches and are designed to fit in a wallet. That is your checklist.

It doesn't even have to be the current year. Any year will do — you are only looking for month and day. When you find the appropriately dated cancel, cross that date off the pocket calendar. If the cancel is not as clear as you would like or if the stamp is damaged, circle the date instead of crossing it out. That way you will know you have a space filler but are still looking for a better example.

Finding dated postmarks on stamps is not difficult. Look in your own albums, stock books and those boxes of stamps I know you have hidden in the back of your closet.

You will almost certainly fill half or more of the year without spending a cent. The nickel and dime boxes at shows are another good source. So are club circuit books, mixtures and swapping with other collectors.

You need a place to put the stamps once you have found them. If hinging or mounting the stamps on an old — or new — calendar suits your tastes, then you are all set.

Some might prefer using a stock book with at least 12 pages, one for each month.

Or you can make your own pages. A letter-size sheet of better paper upon which you rule out 28, 29, 30 or 31 spaces for stamps will work just fine. The page will probably have more eye appeal if you lay it out horizontally.

Also, for a really easy do-it-yourself project, you can print calendar pages from a computer. Many desktop or word processing programs already have calendar-printing capabilities built in.

Check your computer to see if you have this feature. My desktop computer has Microsoft Word, which has several calendar templates.

If you have Word installed on your computer, launch the program. Select "New" on the file toolbar, then select "Template on My Computer." Once you have the template box on your screen, select "Other Documents" and click "Calendar Wizard."

This will walk you through the steps of making a monthly calendar. I also have Microsoft Publisher on my computer. This program offers many more styles of full-page and wallet-size calendar options that require little or no tweaking to be perfect for this project.

Leap day, Feb. 29 comes only once every four years. In many countries, post offices are closed on Christmas and New Year's Day.

Some countries use different calendars, but that usually is only a problem if you are concerned about the year date. For example, Japan and Thailand date the year from the accession of the emperor and king, respectively, but the days and months are still the same.

Much of Eastern Europe continued to use the Julian calendar into the early years of the 20th century, but that also does not matter for the purposes of a non-year-specific calendar.

Until relatively recently, most U.S. postmarks were in month-day-year order. Over the past 20 years or so, most changed to day-month-year order, which is standard for much of the rest of the world. Some countries also use year-month-day order.

I have several boxes of the current Great Britain Queen Elizabeth II definitives. I poked through them in preparation for this article. Most had wavy-line or other types of obliterators that gave no indication of place or date of mailing.

After a half hour of sorting, I found only three stamps that had enough of the date to go into a calendar collection. One of them, a 2½p stamp postmarked Huntingdon, Feb. 16, 1962, is shown in Figure 6.

If you are lucky, you will find some very unusual and quite fascinating cancels, such as the Australian cancellation on the 2-penny Gov. Arthur Phillip at Sydney Cove stamp shown in Figure 7.

Not only is the date legible (Nov. 25, 1937), but the cancellation reads "Late Fee." A late fee was a special handling charge paid for dispatching mail to a boat, ship or train after the regular dispatch of mail had already been sent.

The larger the stamp, the better the chances are of it getting enough of the date of the cancel for it to work in a calendar collection.

Collecting postmarked stamps by date is a simple yet surprisingly addictive collecting project that won't cost a lot of money.

You might even be able to do this without spending anything but your time.

With the proliferation of sprayed-on cancels around the world, we might soon see the complete elimination on a global scale of the familiar circular date-stamps that have done the job for more than 160 years.

But there are still billions of older stamps available with collectible, dated postmarks.

Collectors interested in a calendar collection or in other types of collecting stamps with bull's-eye cancels will want to join the Bullseye Cancel Collectors Club. The club publishes BCCC Bulletin quarterly.