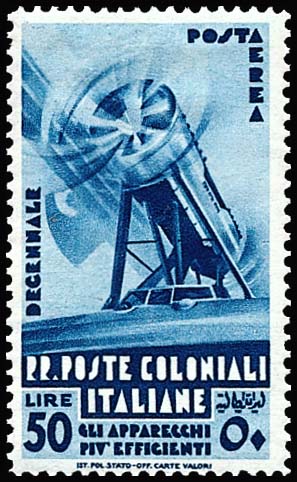 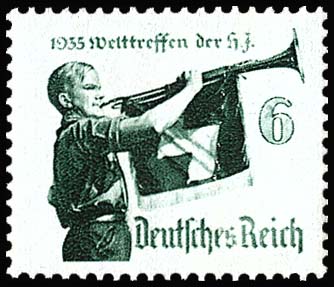 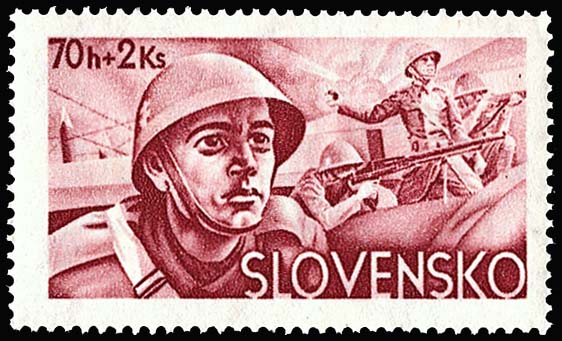 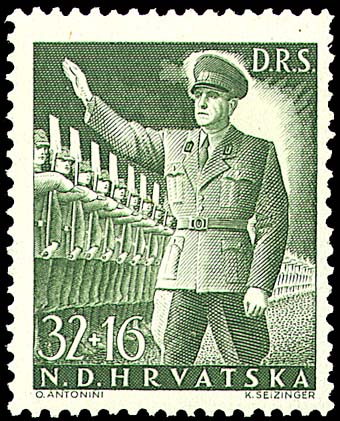 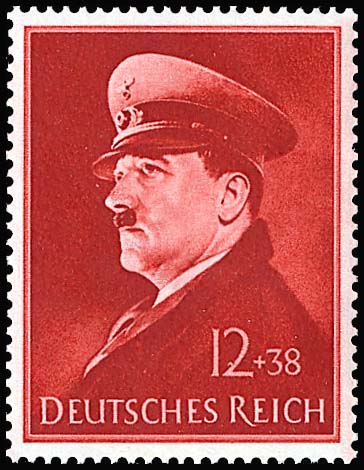 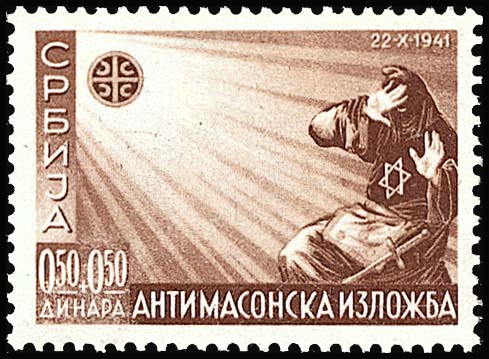 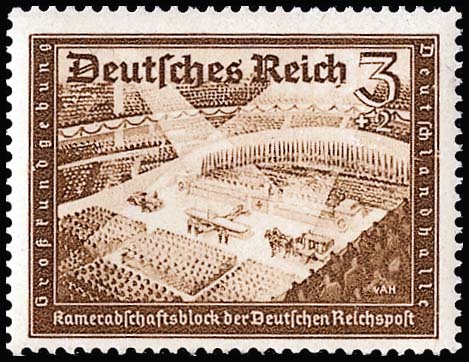 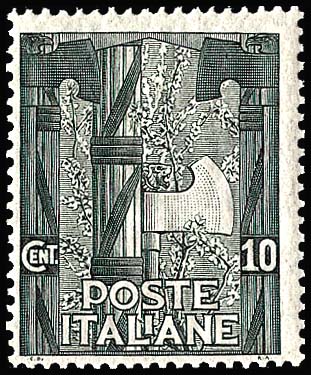 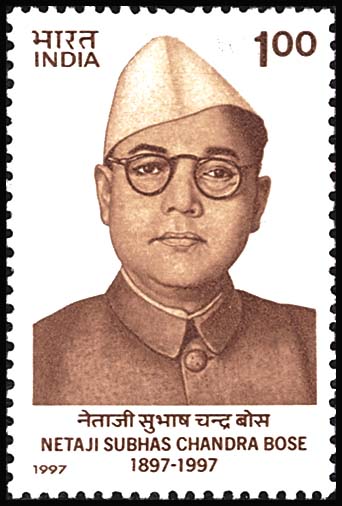 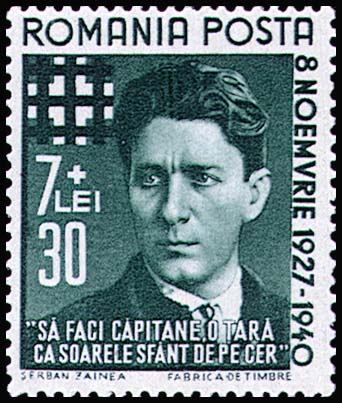 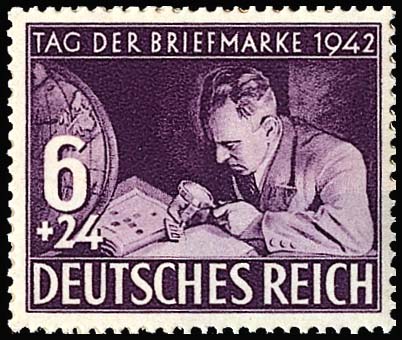 A 6-pfennig+24pf Philatelist semipostal stamp, Germany Scott B201.
Previous
Next

The 20th century was wracked by the emergence of two totalitarian ideologies that, while completely antithetical, were mirror images of each other.

Both philosophies were aware of the propaganda value inherent in stamps, and they used stamp collecting to further their aims.Both fascism and communism sprang from the witch's brew of late 19th-century materialism seasoned with the horrendous bloodshed and cataclysmic disruptions of World War I.

For the 75 years communism held sway in Europe, its personalities and ideals found wide expression on the stamps of the countries it ruled.

This happened too on stamps of nonaligned nations seeking to curry favor with the communist juggernauts.

Nazism, the German variety of fascism, explicitly recruited stamp collecting to the cause, as shown by the 6-pfennig+24pf deep purple Philatelist semipostal stamp, Germany Scott B201, in Figure 1.

The course of fascism fortunately was much shorter, beginning with Mussolini's seizure of power in 1922 and ending, for the most part, in a bloody shambles at the conclusion of World War II.

Walter Lacquer once observed, "Fascist, if not closely defined, becomes a meaningless term of abuse." The ideology of fascism can be defined from the stamps it produced.

The Italian Fascist Party was the first fascist group to emerge and gain control of a sovereign state and nation, but German Nazism quickly eclipsed and surpassed its Italian predecessor in both power and virulence.

The Third Reich period of German philately is a popular collecting area that fascinates some hobbyists with absolutely no Nazi sympathies the way interrupted mail fascinates some collectors who have no desire to precipitate the sinking of ocean liners, crashing of planes or derailing of trains.

Fascism went by many names in many different countries: the National Socialist German Workers (Nazi) Party in Germany, the Legion of the Archangel Michael (Iron Guard) in Romania, the Arrow Cross in Hungary, the Ustasha in Croatia, the Falange in Spain. Regardless of the name, all fascist parties shared a similar ideology.

Fascism takes it name from the symbol of the Italian Fascist Party, the fasces.

Like the swastika, the fasces had a long and honorable history before it was appropriated by Mussolini and his fascist thugs. Three fasces appear on the 10-centesimo dark green Fascist Emblem of the New Government stamp, Italy Scott 159, shown in Figure 2, which was issued to mark the first anniversary of Mussolini's seizure of power in 1922.

The fasces is a bundle of rods and among them an ax with a projecting blade. The fasces was a symbol of the Roman republic that embodied strength in unity. Individually, the rods and ax handle could be broken. Bound together, they were unbreakable.

Fasces were borne before Roman magistrates as a symbol of their authority.

Much of the iconography of the United States is patterned on that of the ancient Roman republic. Fasces flank the seat of the speaker of the House in the U.S. Congress, and they graced the back of the Mercury Head dime of 1916-45.

For fascists, the fasces embody the ideals of nationalism, statism (the concentration of economic planning and power in a highly centralized government) and corporatism (the organization of society into industrial and professional corporations).

The central tenet of fascism is nationalism. The nation defines the greatest good and the individual is subordinate to and a servant of the nation.

Corporatist, statist and nationalist ideals find expression in a mass rally depicted on the 3pf+2pf bister-brown Meeting in German Hall, Berlin semipostal stamp, Scott B148, shown in Figure 3. The Nazis were addicted to mass rallies and marches that put the individual in his place as a tiny cog in the great wheel of party, state and nation.

Anything international that existed within the nation had to be destroyed to keep the nation pure, as pictured on the Serbian 50-para+50p yellow-brown Anti-Masonic occupation semipostal stamp, Scott 2NB15, shown in Figure 4.

The anti-Masonic symbols on the stamp also work as anti-Semitic symbols, which is appropriate because fascists saw Jews as the controllers behind both Free Masonry and communism.

The leader principle was another pillar of fascist ideology. The leader (Il Duce, der Fuhrer) was the embodiment of the nation's will and the final arbiter of all truth, goodness and weal.

After seizing power in his March on Rome in 1922, Benito Mussolini was the acknowledged leader of fascist leaders. After Adolf Hitler's appointment as German chancellor and his assumption of the presidency at Hindenburg's death in 1933, he quickly eclipsed the Italian dictator, who became very much a junior partner.

Every national fascist party had its own leader, many of whom, such as Ante Pavelic, shown reviewing the Labor Corps on the 32-kuna+16k gray-green semipostal stamp in Figure 6, Croatia Scott B68, aped the very appearance and mannerisms of der Fuhrer.

Another principle of fascism was militarism. Many fascists were disillusioned soldiers and airmen from World War I.

For them, the military embodied the finest ideals of the nation and was the instrument of national will.

The 70-halierov+2-koruna rose-brown Infantrymen semipostal stamp shown in Figure 7, Slovakia Scott B14, is just one of many stamps issued by fascist governments that glorified the military.

Fascism saw itself as a youth movement, sweeping away the old, failed ideas and the senescent leaders of democracy, liberalism and reason. In the final days of the war, the Hitler Youth were mobilized and proved themselves to be among the most fanatical of Hitler's followers.

The fascist predilection for speed, aviation and technology can be seen on the many aviation-theme stamps of fascist Italy as well as on the Italian Colonies 50-lira More Efficient Machinery stamp shown in Figure 9, Scott C27, issued in 1932 to mark the Fascists 10th anniversary in power.

Fascist views of religion varied widely. Hitler loathed the international nature of Roman Catholicism and sought unsuccessfully to coordinate all German Christians into a single church called the German Believers.

The fascist parties of Spain, Romania, Croatia and Slovakia were all strongly influenced by religion. In Slovakia, religion tended to mitigate anti-Semitism, while in Romania, it seemed to inflame it.

Corneliu Codreanu, shown on the 7-lei+50-ban dark green semipostal stamp in Figure 10, Romania Scott B145, founded the Legion of the Archangel Michael in Romania after having a vision in which the commander of the Heavenly Host commissioned him to save Romania from communism, Jews and Gypsies.

His movement, also called the Iron Guard, was particularly brutal and violent in carrying out lynchings and assassinations, all in God's name.

King Carol II of Romania, a noted stamp collector, found it impossible to deal with the Iron Guard through the courts, because it had the sympathy, if not outright support, of the judges, police and populace.

Finally, after the Iron Guard assassinated the prime minister, the King had its leadership, including Codreanu, arrested by the army and "shot while trying to escape," as the story goes.

The Iron Guard had its day when the fall of France forced the abdication of the pro-western King Carol.

While fascism was primarily a European phenomenon, it did find expression elsewhere in the world, for example, in the Forward Bloc Indian fascist party of Subhas Chandra Bose.

Chandra Bose, shown in Figure 11 on an Indian 1-rupee stamp, Scott 1602, believed that Indians needed a strong totalitarian leader (himself, of course). He rejected British rule of India as well as the ideal of democracy. His goal was to drive out the British and make India a fascist totalitarian state under his leadership.

During World War II, Chandra Bose raised a small force of Indian soldiers to fight on the side of the Germans and Japanese, and he made anti-British broadcasts intended to cause Indian troops to mutiny or defect. Bose was killed in a plane crash in 1945 while trying to flee to Tokyo.

Most Indians saw Chandra Bose as a traitor and a puppet of the Japanese and Germans, but others still revere him as an Indian patriot.

George Santayana said, "Those who cannot remember the past are condemned to repeat it." Stamp collecting can be an enjoyable aide-memoire for avoiding such a regrettable course of events.