Most postage stamps have security features 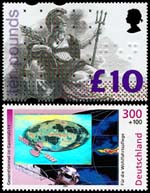 Figure 5. Several security features were incorporated in Britain's £10 Britannia stamp issued in 1993 (top). The German semipostal at bottom includes a hologram in its design.

Figure 3. Tiny letters or numbers known as microprinting can be seen only with magnification. Microprinting is hard to reproduce. 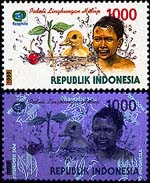 Figure 2. A 1999 Indonesian stamp viewed with normal light (top) and under ultraviolet light.

Figure 1. The engraving on the United States 15¢ Lincoln memorial stamp of 1866 (left) is similar to the engraving on today's U.S. currency, such as on the $5 bill detail at right.
Previous
Next

As the use of traditional security printing procedures declined in the 1990s, postal authorities worldwide added a number of interesting features to postage stamps that are intended to foil attempts at counterfeiting. Postage stamps are considered to be security documents of the countries that issue them. They are, after all, marked with a face value and are negotiable for specific services.

The early revenue stamps and postage stamps of the United States shared many characteristics with United States currency, from their portraits of honored statesmen to the fine line engraving used to create intricately detailed designs. Shown at left in Figure 1, for example, is the 15¢ black Abraham Lincoln memorial postage stamp of 1866, United States Scott 77.

If you take a close look at the portrait on either document, you will see that it is created by carefully incised fine raised lines that show remarkable detail in Lincoln's face and in the shaded background behind him. Printing presses are abundant and creating counterfeit currency would be a fairly simple procedure if not for the special printing process used to create paper money.

That same security process, intaglio printing (pronounced in-TAL-yo), was once the only way that United States postage stamps were printed. The image of the stamp design was engraved in recess into a small piece of steel known as the die. Through a process of repeated image transfer, the recess design in the die was reproduced on a large printing plate that was fitted onto a special press.

This process was used to create the elaborate fine detail and raised designs characteristic of intaglio printing. It was nearly impossible to convincingly fake such intricacy, and postage stamps and revenue stamps resembled the security documents they were intended to be.

By 2000, many postal authorities, including the United States Postal Service, had virtually abandoned the craft of intaglio printing for their postal issues, being either unable or unwilling to invest in the quality and skill that their predecessors were able to accomplish more than 130 years before them. A few countries, including Sweden, Denmark, Slovakia and the Czech Republic, regularly produce and issue intaglio-printed stamps today with great pride.

Many postal authorities now opt to use the cheaper, faster and easier process of offset lithography, which transfers an inked image from various printing plates to rubber blanket cylinders and then onto stamp paper that whizzes through the press from a giant roll called a web.

Because these modern stamps have very little to distinguish them from decorative stickers that can be purchased at the greeting card store, postal authorities have looked for different ways to apply an element of security to the colorful postage labels they now produce.

Some of these security characteristics seem on the surface to have little genuine utility. The U.S. Postal Service, for example, claims that printing panes of stamps with multiple designs is considered to be a security component. Presumably it is more difficult to reproduce 20 different stamp designs than just a single design.

Many of the security features now employed in postage stamp printing are difficult to produce illicitly, but they are also difficult to detect without the help of special equipment. As an example, some countries imprint special designs on their stamps using luminescent ink that can only be viewed with ultraviolet light. In the World of New Issues column, Denise McCarty describes recent stamps from Mexico that have this type of hidden luminescence.

Similar issues have been created by Indonesia for a number of years. Figure 2 shows a 1,000-rupiah stamp, Indonesia Scott 1853, issued June 5, 1999. The image of the stamp at top shows how it appears under normal light. At bottom is an image of the same stamp exposed to longwave ultraviolet light. The insignia of POS Indonesia, the Indonesian postal service, appears several times on the single stamp.

Luminescence and phosphor tagging are used by postal authorities to trigger sensing devices in mail-sorting machinery, but the taggant also serves as a security device to thwart potential stamp counterfeiters. Someone intent on counterfeiting Indonesia's stamps probably would not be dissuaded by the presence of the POS Indonesia insignia, but if the bogus stamps do not contain the proper marking, it makes the case for prosecuting the counterfeiters much easier.

A number of other characteristics just as subtle are intended to serve as security features on postage stamps. Microprinting is used by postal authorities in the United States, Canada and a few other countries. Letters or numbers are printed in type so tiny that it is virtually impossible to read the text without using a magnifying glass or microscope.

Figure 3 shows the 33¢ John & William Bartram stamp (United States Scott 3314) issued May 18, 1999. The word "BOTANISTS" is microprinted upon one petal of the flower in the stamp design. If the design of the stamp is improperly reproduced by photocopying or some similar means, the microprinted text is rendered illegible in the process, making it easier to tell a counterfeit stamp from the genuine article.

The United States has also made use of technology that allows a hidden image to be printed within the stamp design. To see a hidden feature encoded into selected stamp designs, a special acrylic decoder lens must be placed on the stamp and tilted at a prescribed angle.

Figure 4 shows two views of the 32¢ Wisconsin Statehood stamp of 1998, Scott 3206. At left is the stamp as it appears when viewed normally. At right is the same stamp photographed through the special decoder lens. A large badger appears to be floating in the blue sky above the farm scene. As with microprinting, the hidden image cannot be precisely reproduced on a bogus stamp by using photographic techniques.

Some other security features used on stamps are less complicated and more obvious. A few nations, including Great Britain and the Netherlands, use syncopated or elliptical perforations that interrupt the normal pattern of perforation holes.

Large oval-shaped syncopated perforations can be seen along the top and bottom of Britain's 1993 £10 Britannia high-value stamp, Scott 1478, pictured at top in Figure 5. This same stamp uses granite paper, which contains visible colored threads or fibers. The paper is specially made to print stamps and is not readily available to potential stamp fakers.

The Britannia stamp also uses an optically variable ink to print the queen's profile in the upper-right corner. When the stamp is tilted slightly, the metallic color of the queen's image appears to change from one color to another. This stamp also includes multicolored microprinting, embossed braille lettering and phosphor tagging.

Some of these security features, including embossing and granite paper, have been used by various stamp printers for many decades. Some other traditional forms of security, including watermarks in stamp paper and the precise measurement of perforation holes, are also used by some of today's stamp contractors.

New technology has created perhaps the flashiest security feature of them all: the holographic image, which uses lasers to convey a silvery three-dimensional image on a two-dimensional stamp.

One of the more recent hologram stamps was issued by Germany in October 1999. The 300 pfennig+100pf semipostal stamp, Scott B859, is shown at bottom in Figure 5. The holographic effect is lost in the reproduction shown here, which demonstrates how the hologram, while being a fascinating decorative element, also serves to make counterfeiting the postage stamp much more difficult.

While the security features of most postage stamps are not as obvious as a gleaming holographic image, nearly all postal adhesives can claim some added measure of security.

Though our stamps may no longer convey the noble dignity of security documents of the 19th century, postal authorities continue to use different means to protect the integrity of the stamps they produce today.