Old letters can connect collectors to their hometown's past 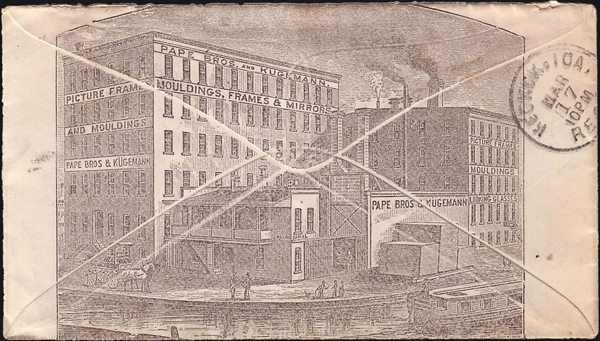 Figure 4. The back of the Pape Bros. & Kugemann Co. cover, offering a glimpse into life in mid-19th century Cincinnati. Click on image to enlarge. 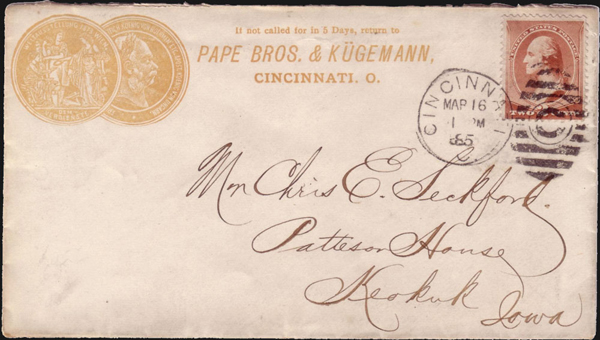 Figure 3. The front of an advertising cover for Pape Bros. & Kugemann Co., postmarked Cincinnati, March 16, 1885. Click on image to enlarge. 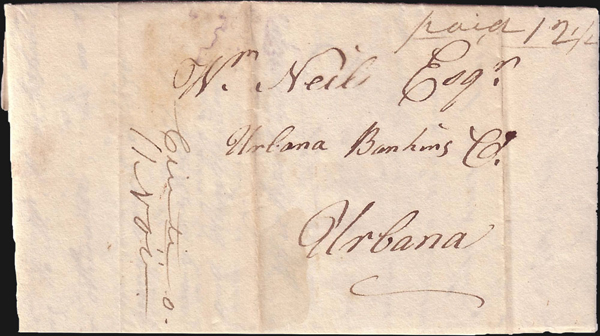 Figure 2. A folded stampless cover mailed Nov. 11, 1816, from Cincinnati to Urbana, Ohio. The postage was paid by the sender. Click on image to enlarge.

Figure 1. A lady's cover mailed Sept. 2, 1853, from Cincinnati, Ohio, to Marietta, Ohio. The letter inside includes a description of Cincinnati. Click on image to enlarge.
Previous
Next

Stamp collectors have a direct path to the past.

We stamp collectors can touch the people of the past every time we work on our collections. The stamps carried letters. The letters carried thoughts, feelings, troubles, happiness and business. Sometimes, those letters can be so touching and thought provoking that the initial reason for acquiring it – the postal history aspects – becomes secondary.

I recently had the good fortune of acquiring some interesting pieces of Cincinnati, Ohio, postal history.

Cincinnati is where I was born and grew up, hence my interest in my hometown's past.

Figure 1 shows a pretty little lady's cover, so called because of its petite size. The postal history aspects of the little cover are notable, although not scarce. The red postmark, dated Sept. 2, is called an integral postmark because it bears the postal rate "3 Paid" at the bottom of the circular datestamp. There is an additional "PAID" handstamp.

The little cover is addressed to "Miss Charlotte Barker" in Marietta, Ohio. The letter within is dated "Cincinnati, Aug. 20, 1853." It was sent by Barker's cousin Sarah, who had moved to Cincinnati to live and care for her brother.

Sarah wrote that she missed her friends in Marietta, but that her family did not need her there and in Cincinnati she could make her brother's life more cheerful.

Additionally, she could earn a little extra by writing, and thus, she said, it would make her "feel more independent." In the days before computers and even typewriters, people who could write legibly were in demand for writing business correspondence.

The most interesting part of Sarah's letter was her description of Cincinnati.

Cincinnati was a big city, comparatively speaking, in the 1850s. In fact, in those days, it was the sixth largest city in the United States, and had a population of nearly 115,000. Sarah describes her former Marietta home with its trees, flowers and birds singing sweetly and then describes Cincinnati as having "dingy walls, dusty streets, spent air and everlasting hubbub of a City." She adds that she had grown quite used to it.

In fact, her description of Cincinnati at night sounds romantic: "I wish you could look down from my window upon the sea of lights below. One might almost imagine the starry sky reflected in the clear mirror or a summer lake. The city looks much better by moon and star light."

It was sent to Urbana, Ohio, at the postage rate of 12½¢, which is inscribed in the upper right corner along with the word "paid" to show that the postage was paid by the sender.

In those days, the postage could be paid by the sender or sent unpaid to be collected from the recipient. The rate at the time was 12½¢ for single-sheet letters sent a distance of 80 miles to 150 miles. Urbana is just about 80 miles from Cincinnati.

Cincinnati was a booming frontier town in 1816. With its 9,000 residents, Cincinnati was the 14th largest city in the United States and was poised for a population explosion because of its location on the Ohio River.

The sender of this letter was Richard Gaines, who had a shoe and dry goods store. He was also interested in politics and in later years was a good friend of a famous Cincinnatian, Salmon P. Chase. Among other things, Chase served as secretary of the Treasury and chief justice of the U.S. Supreme Court.

One of my other Cincinnati acquisitions conveys far more history than postal history. Figure 3 shows this illustrated advertising cover from the Pape Bros. & Kugemann Co.

The illustration on the cover appears to be the obverse and reverse of an Austrian medallion.

I checked an old book I have about businesses in Cincinnati, and I found out that Pape Bros. & Kugemann operated a showroom on Main Street.

More importantly, the factory had frontage on the Miami and Erie Canal, which connected Lake Erie to the Ohio River from Toledo to Cincinnati.

What looks like a fairly mundane cover from the front becomes a piece of long-lost social history on the back, shown in Figure 4, with its illustration of the Pape Bros. & Kugemann factory, the Miami and Erie Canal, a canal boat, a horse-drawn wagon and the factory building spouting smoke, which contributed to city's dirtiness.

The whole scene provides a glimpse into a day in mid-19th century life in my hometown.

You might think that collecting old covers such as these is costly, but that is not necessarily so. Many interesting stampless folded letters can be purchased for a few dollars each.

If you start looking, you might find some from your hometown. Collecting local postal history is a wonderful way to connect with the people who lived, worked, laughed and cried in your hometown.

Try it for yourself. You'll appreciate where you live even more.