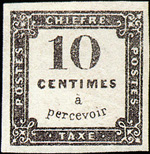 Figure 1. This French stamp from 1859 is considered to be the world's first postage due.

Postage due stamps have been used by many nations to ensure that proper payment is made for the delivery of mail. When postal authorities find a piece of mail that does not show full postage payment, they usually try to collect the postage amount that is owed, either from the sender or the addressee.

To begin this process, the shortpaid item is marked in some way to identify it as postage due. Often, postage due stamps are used for this purpose, applied directly on the item to show the amount due. Handstamped and handwritten markings also serve notice that postage payment is incomplete.

A 10-centime postage due stamp created by French authorities in 1859 is considered to be the first such issue in the world. Unused examples of the stamp, shown in Figure 1, are quite scarce today. This early French postage due stamp is identified in the Scott Standard Postage Stamp Catalogue as France Scott J1. Scott editors use the prefix "J" to identify postage due stamps, which appear in each country's listings following regular postage stamps, semipostals and airmails.

There is, in fact, a postage due listing in the Scott catalog for Netherlands Indies J2 that dates from 1845, 14 years before the French postage due. However, this typeset, fill-in-the-blank label is listed separately from postage due stamps in the Dutch stamp catalog Speciale Postzegelcatalogus. It is classified there as an overland mail marking, and it likely served a somewhat different purpose than that country's regular postage due stamps.

Postage due stamps may look quite plain to some collectors, but generally they are utilitarian stamps, manufactured for function rather than for beauty. Of the three worldwide postage due stamps pictured in Figure 2, the 5-penny 1984 stamp at left from Gibraltar (J15) shows just how basic these stamp designs can get.

At least it has a design all its own, which is not true for the other two stamps in the same illustration. The 1921 Austrian postage due (J102) in the center and the 1987 issue from Suriname (J63) at right are simply previously issued regular postage stamps overprinted with words that convert them into postage dues.

The cover shown at the top of Figure 3 illustrates one way regular U.S. postage due stamps were used on shortpaid mail. Mailed March 16, 1968, from Incline Village, Nev., to Rockland, Maine, when the domestic letter rate was 6¢, this envelope bears the 6¢ Illinois Statehood stamp issued just one month before.

The postage due assessment of an additional 6¢ is marked on the cover in two ways: by the handstamped message "POSTAGE DUE" applied below the postage stamp with the value "6¢" written in by hand, and by the two postage due stamps from the 1959 series to the left of the postage stamp, Scott J89 (1¢) and J93 (5¢).

The envelope, with its "DO NOT BEND" handstamp near the bottom, almost certainly carried more than 1 ounce in weight. In 1968, each additional ounce of postage was also assessed 6¢, which accounts for the 6¢ postage due marking and stamps.

Postage due stamps were used in addition to handstamped markings to provide some accountability for the funds collected while processing this mail. As use of the stamps declined in the 1970s, post offices more frequently used specially marked postage due meter stamps.

Because of the many different world currencies, analyzing shortpaid mail coming in from foreign countries can be much more complex, but the countries of the world have devised a system to determine how much should be collected to process a shortpaid item. The Universal Postal Union was established in 1874 to foster postal cooperation among the many countries of the world.

Not long after, it was agreed that shortpaid mail sent internationally would be marked with a stamped letter "T" (for the French word "taxe") and assessed the amount due in French centimes, which each country could then convert to its own currency. The "T" marking is still in use today, though the method of assessing postage due on international mail has changed.

The postcard shown at the bottom of Figure 3 was mailed in 1982 from Austria to the United States. The letter "T" appears in a box with two numbers: 100, which represents the shortpaid amount in the currency of the sending office (Austria), over 700, which in this case represents the Austrian overseas surface rate.

That fraction, 100 over 700, is multiplied by the U.S. foreign surface rate in effect at the time, 30¢, which would round down to 4¢. Added to a 42¢ international handling charge put into effect in 1981, it totals the 46¢ postage due assessment marked on the postal card in the lower part of the address.

In recent years U.S. postal authorities have used many different markings to indicate postage due on shortpaid mail. The postcard shown in Figure 4 was originally mailed in 1998 without any stamp on it. The mailer may have mistakenly believed the preprinted card was postage paid business reply mail.

The unfranked card was spotted en route and marked with a red pointing finger "RETURN FOR POSTAGE" handstamp directing the item back to the mailer (whose name and address were carefully printed on the reverse of the card). On his second attempt to mail the same card, the mailer overpaid the postcard rate by 12¢, applying a 32¢ letter-rate stamp instead, and the card was delivered successfully.

On some occasions, the mail carrier may deliver the shortpaid item and leave an envelope requesting the amount of money due, as shown in Figure 5. The addressee then pays that amount and leaves it in the mailbox for the carrier to retrieve on the next visit.

Postal historians enjoy looking for various uses of postage due stamps. The example shown in Figure 6 is a 1950 due bill on a post office form assessing a Chicago postal customer $1.06 for postage due, most likely a day's worth of business reply mail or shortpaid business mail. Three postage due stamps are affixed to the form: a $1 (J77) from the 1930 series and two 3¢ (J82) from the 1931 series.

There are so many different domestic and international postage due stamps and markings that collectors interested in the field are likely to specialize in a certain area, such as "T" markings, shortpaid mail from or to one specific country, or domestic postage due.

Postage due stamps saved on cover are particularly interesting because they help to document the postal history of shortpaid mail.

Some of the information in this column was obtained from two books by Anthony S. Wawrukiewicz and Henry W. Beecher that are indispensable for understanding postage rates and the assessment of postage due charges: U.S. Domestic Postal Rates, 1872-1999, and U.S. International Postal Rates, 1872-1996.