Postage stamp: more than the sum of its parts 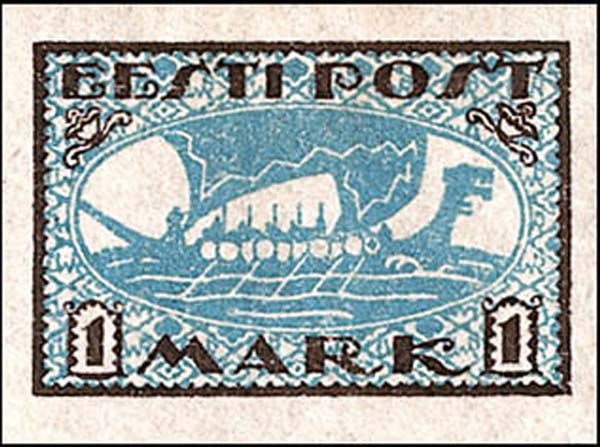 Figure 9. Imperforate stamps, such as this Estonian 1-mark blue and black-brown Viking Ship stamp, have to be cut apart. Click on image to enlarge. 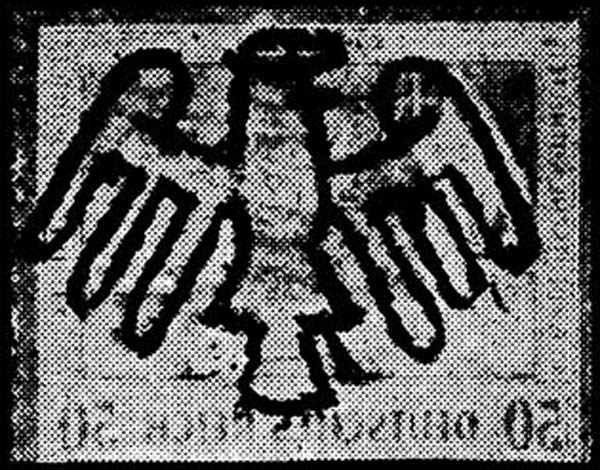 Figure 7. Some stamps are printed on paper with a "watermark," a security feature. This German Eagle watermark was used in 1930. Click on image to enlarge. 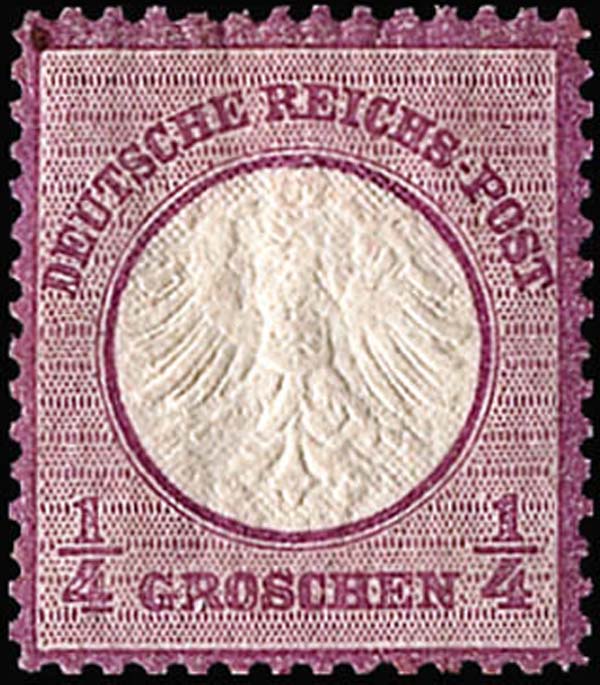 Figure 5. Part of the design of this German ¼-groschen violet Imperial Eagle stamp is embossed, or raised. Click on image to enlarge. 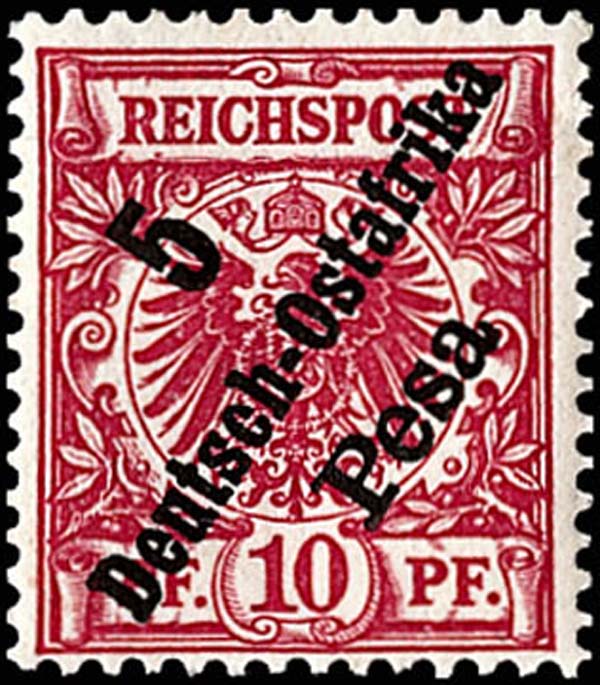 Figure 4. A surcharged and overprinted 5-pesa-on-10-pfennig carmine Imperial Eagle stamp of German East Africa. A surcharge is a special kind of overprint that changes the denomination. Click on image to enlarge. 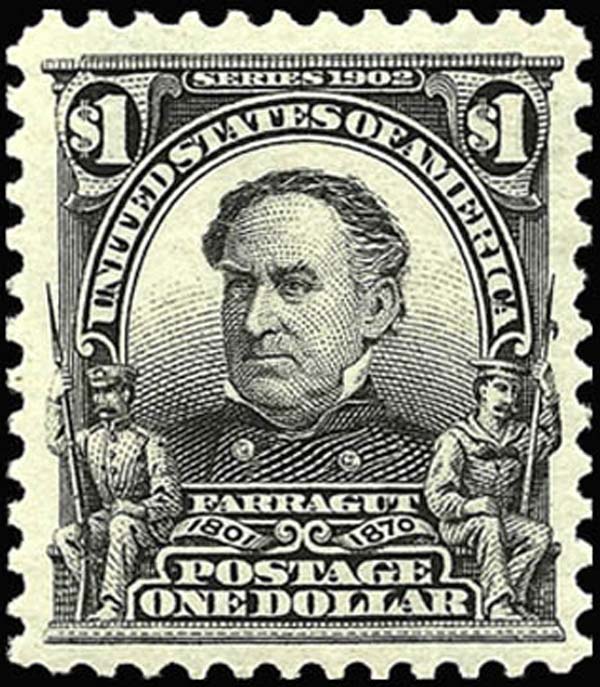 Figure 3. The frame ornaments in the design of this $1 black David G. Farragut stamp include a seated marine and a seated sailor. Click on image to enlarge.

Figure 2. This 4¢ deep red-brown and black Electric Automobile stamp, part of the Pan American Exposition set, has an elaborate frame around the vignette. Click on image to enlarge. 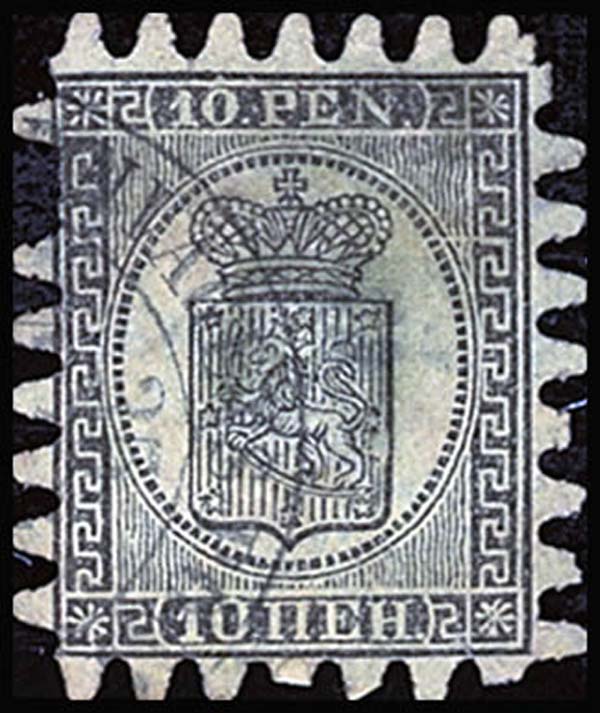 Figure 10. A Finnish 10-pennia Coat of Arms stamp with serpentine rouletting. Click on image to enlarge. 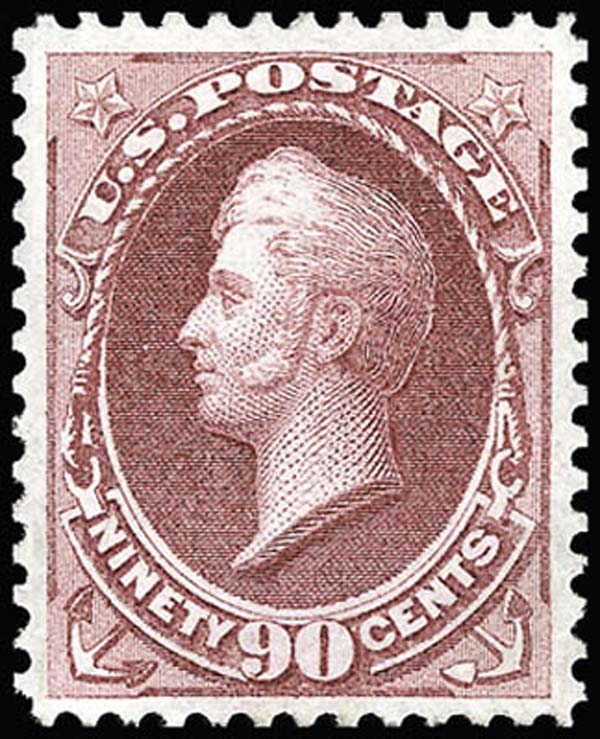 Figure 1. A 90¢ carmine Commodore Oliver Hazard Perry stamp. The vignette is the central part of the design. The frame surrounds it. Click on image to enlarge.
Previous
Next

"A man of sovereign parts he is esteemed; Well fitted in arts, glorious in arms: Nothing becomes him ill that he would well."

Most collectors are used to looking at a stamp as a unit. Stamps, however, also are composed of "sovereign parts."

Let's take a look at some of the parts that go to make up a postage stamp. We will speak in generalities, and of course, there are exceptions to every general rule.

The part of the stamp that has always been of most interest to most collectors is the design. Stamp designs can and should be pleasing to the eye, interesting and attractive. But even the design itself is composed of parts.

The central part of the stamp design, the part that shows Perry in profile, is called the vignette.

The vignette is the central part of the design, but it is usually far from all that there is to the design. The vignette is often contained within a frame. Framing devices can be relatively simple or they can be highly elaborate, such as the frame around the Electric Automobile vignette of the 4¢ deep red-brown and black Pan American Exposition stamp (296) shown in Figure 2.

Inscriptions usually appear within or near the frame.

Inscriptions might include some or all of the following: the name of the country, the type of service provided by the stamp, the denomination, the date the stamp was issued or printed, and the name or description of the stamp subject.

Elaborate frames often are equipped with ornaments. The ornaments in the frame of the $1 black David G. Farragut stamp (311), shown in Figure 3, include a seated marine clutching a musket at lower left and a seated sailor holding a boat hook at lower right.

The list of objects that can appear as frame ornaments

is virtually endless. Pillars, pedestals, post horns, scrolls, flora, fauna, curlicues, doodads, lighting bolts, caryatids (draped female figures), cherubim or other angels, and allegorical or mythological figures are but a few of the ornaments to be found.

Sometimes, after a stamp is printed, it returns to the print shop for additional printing. When printing is added over the original design, the process is called "overprinting."

A special type of overprinting that changes or adds to the face-value of a stamp is called a "surcharge."

The German East Africa stamp (8) shown in Figure 4 is overprinted and surcharged.

The "Deutsch-Ostafrika" overprint prepared the 10-pfennig carmine Imperial Eagle German stamp for use in the German colony.

The "5 Pesa" surcharge (made at the same time as the name overprint) changed the stamp's denomination from German pfennigs to German East African pesas.

Most stamp designs are printed with ink, but some stamp designs also include embossing (the process of giving relief to paper by pressing it with a die).

Designs with embossing are also often found as the imprints (stamp designs) of postal stationery. The Imperial Eagle in the vignette of the design of the ¼-groschen violet German stamp (1) shown in Figure 5 is embossed.

Perhaps the oddest papers used for stamp production were the backs of German military maps and unfinished banknotes, used for stamps issued by Latvia from 1918 to 1921. The back of a Latvian

5-kapeikas carmine Arms stamp (2) printed on the back of a German military map is shown in Figure 6.

In the past, many stamps were produced on paper bearing a security feature called a "watermark" that was intended to make the stamps harder to counterfeit.

Watermarks are made by impressing the upper surface of the paper during manufacture. Wire designs are added to the dandy roll, which squeezes the fibers. The wire impresses a shape, pattern or design, making that part of the paper slightly thinner, thereby producing the watermark.

Some watermarks are distinct enough to be visible to the naked eye, especially when the stamp is viewed with side lighting against a dark background. For others, watermark detection fluid or a light box is required. A German Eagle watermark (Scott watermark No. 223) is shown in Figure 7. It was used in 1930 on a semipostal souvenir sheet (B33).

While the part of a stamp showing the design is usually of primary interest, there are important things going on with the back as well.

Until recent decades, stamp collectors used stamp hinges to mount stamps. The application of a stamp hinge disturbed, to a greater or lesser extent, the stamp's gum.

Other stamps were kept in less than ideal conditions and became stuck to the pages of the stamp album, requiring that they be soaked to be removed, which washed away their gum.

More recently, many postal administrations have issued self-adhesive stamps. These stamps are equipped with pressure sensitive gum that does not need to be moistened to be activated. The stamps come with backing paper to prevent them from adhering to things until they are ready for use.

Stamp collectors have not quite figured out how mint examples of self-adhesive stamps should be collected and mounted.

Given the prices paid for classic stamps with full original gum, most are understandably reluctant to stick and soak self-adhesives before mounting them in albums.

On the other hand, mounting self-adhesives with the adhesive and backing paper intact is less elegant and contributes to album bulge.

Given time, perhaps a new way for collecting and mounting self-adhesive stamps will emerge.

The backs of stamps have also been used for printing several types of messages, including historical or background information about the stamp subjects, instructions for use and advertisements.

The printed back of a Russian 3-kopek rose-red Alexander III stamp (116) is shown in Figure 8. The backprinting shows the imperial eagle and reads in Russian "Kop. 3 Kop." and "Having circulation on par with silver subsidiary coins."

These stamps, printed on thin cardboard, were issued for use as paper money, but they were often used for postage.

With a few rare exceptions, such as some early Portuguese India stamps that were printed locally, one stamp at a time, most stamps are printed in multiples.

The method for separating a stamp from its multiple-printing brothers is another part of what goes to make up a stamp.

The earliest stamps were not manufactured with a built in method of separation and had to be cut apart, usually with scissors. Such stamps are called "imperforate."

Great Britain, the country that invented the postage stamp, was also the first to come up with a more user-friendly method of separating stamps. Henry Archer of England patented a perforating machine in 1850. A perforating machine is used to punch out small holes between the stamps so that they can be torn apart without cutting.

Stamps perforated with Archer's machine were first used by members of Parliament beginning in 1851. By 1854, all British stamps were being issued with perforations.

The stamps shown in Figures 1 through 6 and 8 are all perforated.

Rouletting is another method of separation. In rouletting a sharp disc or blade is used to make cuts at intervals between stamps. Rouletted cuts may be either straightline, serrate, serpentine or diagonal. A Finnish 10-pennia Coat of Arms stamp (8) with serpentine rouletting is shown in Figure 10.

Many modern self-adhesive stamps have die-cut separations. Die cuts differ from rouletting in that an edged tool, called a die, completely penetrates the stamp paper on all sides of the printed stamp. The die-cut stamps are held together by the backing paper until they are peeled off for use.

A stamp has many parts, but any stamp is always greater than the sum of its parts.