Black bears and grizzlies inhabit Glacier National Park in Montana from which this ceramic bear souvenir was mailed in 1960 at the 2-ounce, first-class rate.

This tomahawk was sent in 1955 from a reconstructed village in Ohio that was burned by Indians after it was abandoned during the Revolutionary War. 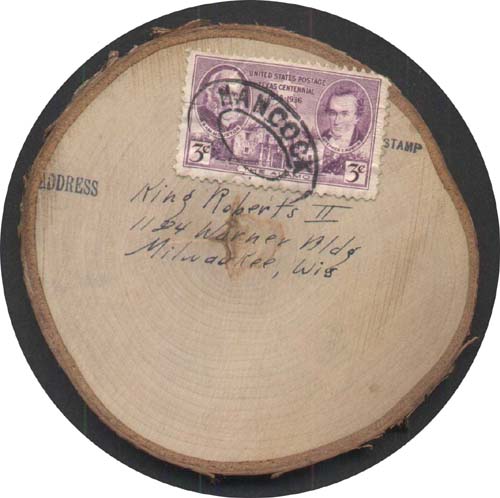 A quarter-inch cut of birch and three handstamps were used to make this postal souvenir that was mailed in the 1930s. The author seeks information about the recipient, King Roberts II at the Roberts Building in Milwaukee. 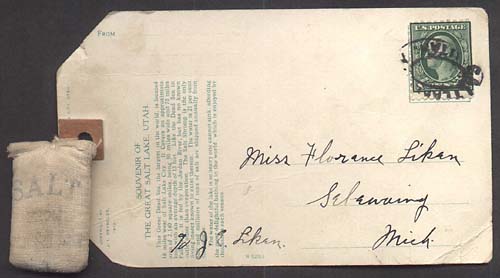 One of the most common postal souvenirs was a tiny bag of salt from Great Salt Lake. The author has three in his collection, ranging from the 1910s decade to the 1950s. Other, similar souvenir bags were used by tourists to mail iron ore, coal and even lav

Postal souvenirs such as this one from the 1920s aren't allowed loose in the mail today because they might damage modern high-speed equipment and would probably be destroyed in the process. Today, it's necessary to put them in an envelope or other protect
Previous
Next

In the days before full postal automation, it was possible to send many objects through the mail that would not be permitted today because of their odd shapes and sizes. Letters and cards must conform to standards allowing them to pass through high-speed facer-cancelers — machines that orient envelopes in the proper position to be postmarked. Today, most letters are not even touched by human hands until a letter carrier puts them in a mailbox.

Some survive and occasionally surface at dealers' tables in stamp shows, at flea markets and at postcard shows. Many are in rough condition, and as a class of collectibles, they are hardly numerous. Over the past five years, I have found fewer than a dozen that I considered worthy of buying at prices ranging from $1 to $30.In a slower, simpler age, vacationing Americans shared the excitement of their travels with family and friends by sending souvenirs to them. These articles were placed directly in the mail, usually attached to a mailing tag that bore the postage and the recipient's address.

A leather fish stapled to a mailing tag is illustrated in Figure 1. The fish was sent at the 1¢ third-class, printed-matter rate that prevailed up to April 15, 1925. The mute, or dateless, cancel was applied in Dobbs Ferry, N.Y., and the souvenir was addressed to Mrs. E.S. Birdsall in Dansville, N.Y. Printed on the back of the tag are the words "I am like a Fish out of water without you," below which is rubber stamped "White Plains, N.Y.," followed by two words penned in ink: "Guess Who." Dobbs Ferry is near White Plains.

The fact that I have found only one souvenir mailed before the 1920s suggests to me that they did not become popular until then. The oldest souvenir in my collection is also one of the most common: a mailing tag to which a small bag of salt is attached from — where else? — Great Salt Lake. It is shown in Figure 2. The mailing tag doubles as a varnished color postcard showing views of swimmers in the lake, salt beds, the Saltair Pavilion and the Great Salt Lake Cut Off, a railroad trestle bridging a section of the briny expanse.

The tag notes that the souvenir was copyrighted in 1913 by J.L. Reynolds of the Souvenir Novelty Co. of Salt Lake City. The text reads: "This Great Dead Sea, the largest in the world, is located 18 miles west of Salt Lake City. It covers an approximate area of 2,140 square miles, being 50 miles wide and 75 miles long with an average depth of 13 feet. Like the Dead Sea in Palestine, it is fed by the Jordan River, but has no known outlet other than evaporation. The Salt Shrimp is the only living insect known to exist therein. The water is 21 per cent salt and millions of tons of salt are shipped annually from this source. The water in the lake is so heavy that one cannot sink, affording the most delightful bathing in the world, which is enjoyed by thousands each season."

A 1¢ Washington stamp from a booklet pane was used to mail the souvenir by the third-class, printed-matter rate. Travelers frequently carried booklet stamps as a convenience. The recipient of the souvenir was Miss Florence Liken, in care of J.E. Liken, in Sebewaing, Mich. The undated cancel reads "SALT LAKE CITY UTAH." I have two other Great Salt Lake souvenirs in my collection, from 1939 to 1956. The 1939 souvenir curiously places the lake three miles closer to the city and notes that the water "is about 22 percent solids."

The Salt Lake City souvenir and the other souvenirs shown on this page should not be confused with novelty postcards, which were much in vogue from the first decade of the 20th century. What distinguishes them from the novelty cards is the mailing tag; however, some articles that I regard as souvenirs also lacked tags. An example is shown in Figure 3. From the 1930s, it is a section of smoothly cut birch, ¼-inch thick by 3½ inches in diameter, on which was rubber stamped the locations for the stamp, the address and, on the back, a message.

The mute cancel reads "Hancock." The state name was so lightly struck that it cannot be read. At that time, there were 13 Hancocks in the United States, including towns by that name in Michigan and Wisconsin. The recipient was King Roberts II, 1124 Roberts Building, Milwaukee, Wis. He sounds like a mover and shaker. Perhaps a reader can shed some light on his identity.

In the same ink used to address the souvenir, the sender wrote "!!!!!!????" under the section on the back rubber-stamped "CORRESPONDENCE." The souvenir weighs exactly 1 ounce and was sent at the 3¢ first-class letter rate that was in effect from July 6, 1932, to July 31, 1958.

The souvenirs shown in Figures 4 and 5 are my favorites because they take me back to my childhood when I spent summers traveling with my father, an independent filmmaker who liked to visit parks, historic sites and other roadside attractions. In 1999, I acquired the tomahawk illustrated in Figure 4 from Steven Rod, who wrote this weekly column for eight years.

It's the second time the tomahawk has been shown on this page. One might say that it is an old souvenir under new administration. It was mailed in July 1955 from Schoenbrunn Village, near New Philadelphia, Ohio, to York, Maine. The village, which was founded in 1772 as a Moravian mission, was abandoned during the Revolutionary War and burned by Indians. Today, 17 reconstructed log buildings and a cemetery greet visitors who can take tours recorded in English or German. Admission is $5 for adults; $1.25 for children. The site is maintained by the state of Ohio.

The ceramic bear in Figure 5 is from Glacier National Park in Montana, from which it was mailed at the 2-ounce rate of 8¢ on Sept. 12, 1960, to Toledo, Ohio. Black bears and grizzlies inhabit the park. The back of the tag has a verse: "I'm just a loving, hugging bear, Bringing joy to those who care, Although your friends are far away, Their thoughts are with you day by day, So cheer up and take a look at me, The cutest cub you ever did see."