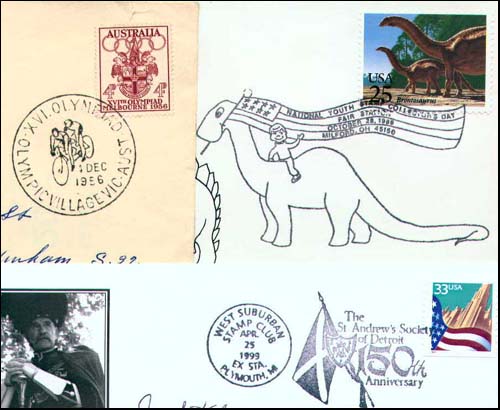 Commemorative postmarks are created for special events (such as the Olympics) or special purposes. Shown here are postmarks that honor the XVIth Summer Olympic games in 1956 (upper left), Youth Stamp Collector's Day and the 150th anniversary of the St. Andrew's Society of Detroit. Click on image to enlarge. 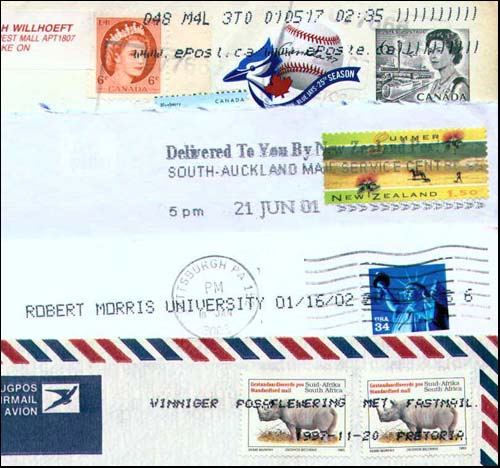 More countries are using sprayed-on postmarks that include a slogan. Illustrated are photographically cropped covers that show ink-jet postmarks from Canada, New Zealand, the United States and South Africa. Click on image to enlarge. 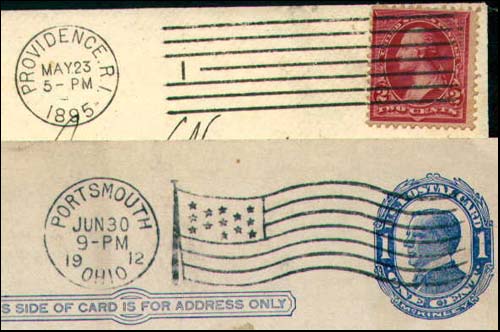 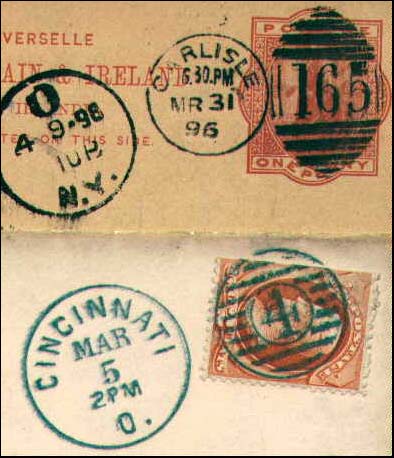 Graphically cropped covers bearing duplex postmarks of Carlisle, England, and Cincinnati, Ohio, that are strikingly similar in appearance. Although shown here cropped, such items are collected as entire covers or cards. Click on image to enlarge. 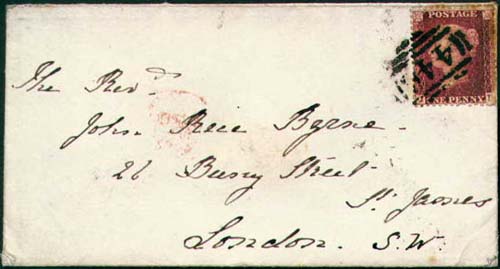 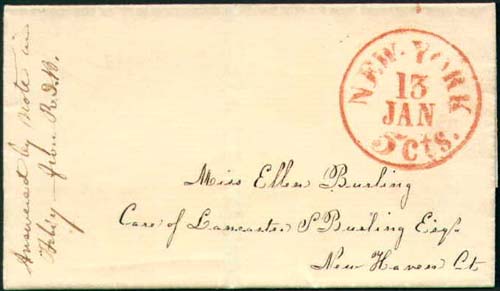 Letters had postmarks long before the first adhesive postage stamps were issued. This stampless cover was sent circa 1850 from New York City to Connecticut. Click on image to enlarge.
Previous
Next

Collectors of mint postage stamps may sometimes forget that postage stamps were made to be used. The whole point of issuing a postage stamp is to use it to indicate that a fee has been paid by the sender for postal services to convey a letter or package to the recipient.

Along the way, post offices mark the postage stamps with cancellations, defacing them so that they cannot be used to pay for postal services again. Strictly speaking, the word cancel refers only to the marking that strikes the stamp, defacing it and invalidating it for further postal use.

Cancels come in abundant variety, from simple strokes of a pen to elaborate fancy cancels that can take the form of flora, fauna and myriad other shapes and designs. They can be made by canceling devices carved from cork, crafted from rubber or manufactured from steel or some other metal.

In the broadest sense of the term, a postmark is an informational marking applied to a letter or parcel by a post office. Most often the term is used to refer to the marking that carries the place, date and time of mailing. Receiving and transit postmarks may also be applied, usually on the back of the cover.

Other markings on covers include auxiliary markings or labels for special services, such as airmail etiquettes or registration labels.

Postmarks existed before the invention of adhesive postage stamps. Some of them even indicated the payment of postage. Figure 1 shows a stampless folded letter. The postmark indicates that it was mailed Jan. 13 from New York and that 5¢ postage was paid.

Unfortunately for collectors, many early postmarks do not have the year as part of the date. Postal history buffs are often required to do a little detective work to determine when a cover was mailed. In many cases, the year will be written on the letter within, although this is not true of the letter shown in Figure 1.

In other cases, consultation of a specialized reference work will help narrow the possibilities. The American Stampless Cover Catalog says that the style of postmark on the cover shown in Figure 1 was used in New York City between 1845 and 1851, narrowing the date of mailing to this period.

Collecting numeral cancels of Great Britain is a very popular collecting field. The cover shown in Figure 2 bears an example of a British numeral cancel. The cancel consists of a numeral placed inside several bars that form the shape of an oval. The numeral indicates the post office from which the letter was mailed.

Several excellent reference works exist that help collectors identify post offices by their numerals. A quick consultation of Collect British Postmarks by J.T. Whitney reveals that the numeral cancel shown in Figure 2, "446," represents Ledbury, England. Backstamps from both Ledbury and London pinpoint the use date to March 31, 1859.

Two different duplex postmarks are struck on the graphically cropped covers shown in Figure 3, one from Carlisle, England, and the other from Cincinnati, Ohio. Although shown here cropped, these items and others pictured in this column are collected as entire covers or cards.

The duplex postmark gets its name from the dual purpose of the single handstamp. One part of the duplex canceler held the postmark, the date of which was changed as needed. The other part was the cancel for defacing the postage stamp, often called the "killer." On many duplex cancelers the cancel is a number contained within a barred oval or circle similar to the cancels shown in Figure 3.

Great Britain used many different types of postmarks, some of which have acquired interesting and descriptive nicknames. These include Bishop marks, crowned circles, tombstones, spoons, thimbles, Maltese crosses, step types, squared circles, barred ovals, triangles, scrolls and many others.

The world's postal services have always looked for ways to increase efficiency. In the 1870s, the invention of canceling machines that automatically fed letters from a hopper and applied the postmark greatly increased the speed of postmarking. Two types of American machine cancels are on the graphically cropped covers shown in Figure 4.

A number of different companies manufactured canceling machines, both in the United States and elsewhere. The look of the cancels differed from manufacturer to manufacturer.

The machines that apply these cancels can be programmed to spray-on whatever slogan is desired. The great thing about this collecting field is that new material can be acquired directly from your daily mail or from businesses that let you see their throw-away envelopes.

Another popular collecting field is that of commemorative and special postmarks. Commemorative postmarks are created for special events (such as the Olympics) or other special purposes. Shown in Figure 6 on graphically cropped covers are postmarks honoring the XVIth Summer Olympic Games held in Melbourne in 1956, a Youth Stamp Collector's Day and the 150th anniversary of the St. Andrew's Society of Detroit.

Postmarks and cancels can be fun and challenging to collect, and this column barely scratches the surface. A future Refresher Course will discuss additional types of postmarks and cancellations and further collecting opportunities not covered in this installment.