Put a little humor in your stamp collecting 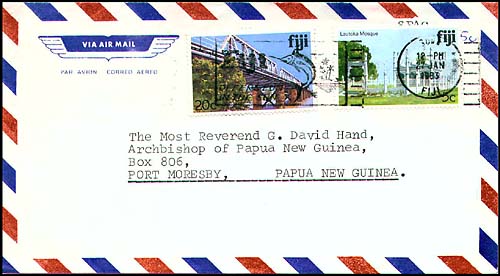 The juxtaposition of stamp and cancel often provide humor, as on this Fijian cover with the swordfish in the cancel leaping above the bridge pictured on the stamp. 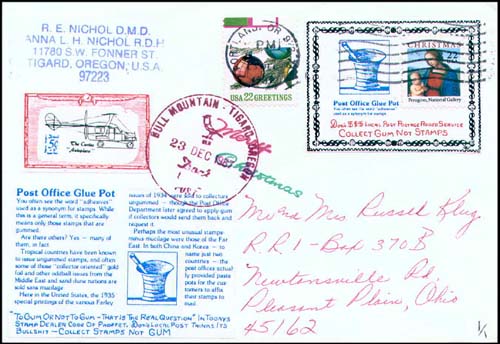 This local post cover pays homage to the lowly post office glue pot while poking a bit of good-natured fun at collectors of mint, never-hinged stamps. 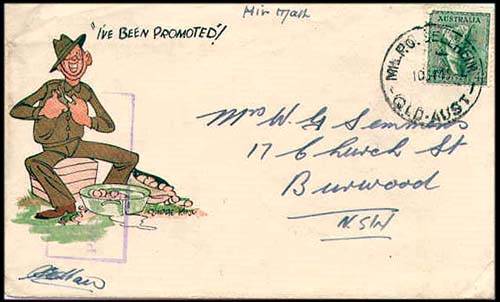 Amusing stationery such as this Australian envelope, helped lighten the soldier's burden and bring a smile to the home front during World War II. 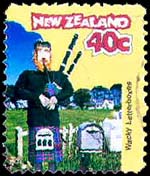 One of New Zealand's wacky mailbox stamps shows a mailbox around which a lifesize Scottish piper is cleverly built. 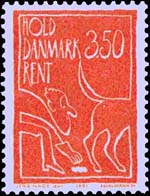 With this stamp of 1991, Denmark reminds dog owners of their civic duty to clean up after their pets. 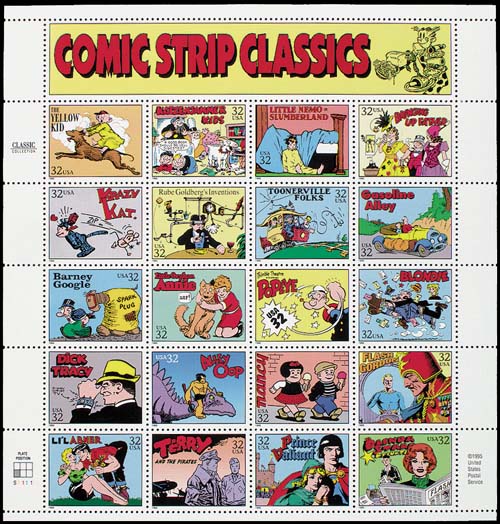 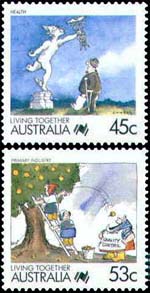 Australia's Living Together definitive stamps, begun in 1988, illustrate a variety of social themes. 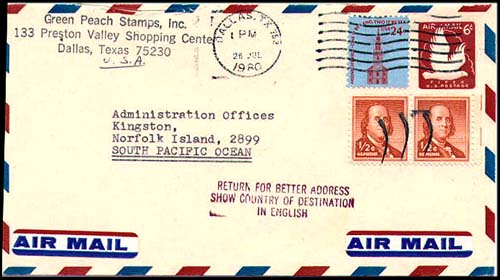 What were they thinking? The handstamp on this cover addressed to Norfolk Island admonishes the to sender to "SHOW COUNTRY OF DESTINATION IN ENGLISH."

Walt Disney cartoon characters cavort on this stamp issued by Antigua.
Previous
Next

We all know stamp collecting is fun, but stamps can also be pretty funny.

In recent years, cartoons and cartoon characters became popular stamp subjects.Collecting stamps with a humorous theme might make an enjoyable respite from more serious philatelic pursuits. Humorous stamps fall into two broad categories: those that are deliberately funny, such as cartoon stamps, and those that are unintentionally funny because of their designs or other idiosyncrasies.

Mickey Mouse, Donald Duck, Bugs Bunny, Snoopy, and many other cartoon characters have been pictured on postage stamps.

Some of the most intriguingly funny stamps use cartoons to illustrate an abstract idea, a historical event or a concept.

In 1988, Australia began issuing a long-running definitive series that used cartoons to convey a variety of aspects relating to the theme Living Together. Two of these stamps are illustrated in Figure 2.

The stamp at the top pictures a man with a broken leg (illustrating health) and the stamp at the bottom shows fruit pickers (defining a primary industry).

Some designs are wackier than others, but a close inspection of this series is bound to bring a few chuckles.

In 1994, the United States issued a pane of 20 stamps commemorating classic comic strips, shown in Figure 3, from the Yellow Kid strip to Brenda Starr Reporter.

The day the stamps were issued, many daily newspaper comic strips were drawn around the theme of the new stamps, focusing welcome attention on these stamps and stamp collecting.

Some stamps are issued to commemorate such odd subjects that you cannot help but smile when you look at them.

While cheese slicers and paper clips may not be inherently funny, the absurdity of them joining kings, queens, presidents, saints and sinners as stamp subjects is fairly droll.

Denmark issued an even more unintentionally hilarious stamp in 1991, shown in Figure 5, that pictures a begloved man performing his civic duty by picking up his dog's droppings.

This is the stamp I think of every time I hear a complaint about some United States stamp subjects being unworthy. Bugs Bunny and teddy bears seem pretty mainstream in comparison to dog droppings.

The wackiest of the wacky, shown in Figure 6, is the stamp that pictures a mailbox in which the door to the mailbox forms the sporran on a Scottish piper's kilt.

Covers can also be pretty funny. Figure 7 shows an Australian cover from World War II whose humorous cachet portrays the most dreaded of all fatigues, kitchen patrol.

Cachetmakers are a creative group responsible for adding both color and humor to stamp collecting.

Labels, stickers and local-post stamps can brighten up a cover and add a bit of fun to a collection.

Nicol's local-post covers are liberally decorated with an endless array of handstamps and adhesives commemorating everything from the ridiculous to the sublime.

The illustrated cover pays tribute to the post office glue pot, and it gives collectors of mint, never-hinged stamps a good ribbing.

There are endless varieties of humorous cachets and cinderella material, but these art forms are just one of many ways a cover can be funny.

Postmarks and ancillary markings can add a sense of irony, whimsy or just plain absurdity that might strike your funny bone.

Figure 9 illustrates a cover from Fiji. The stamps were placed on the cover at just the right places so that when the "FIJI OFFERS FUN IN THE SUN" pictorial postmark was applied, the swordfish in the cancel takes a giant leap above the bridge pictured on the stamp.

Finding similar examples where an illustrated postmark interacts with the stamp design can provide observant collectors a lot of fun at little expense.

Figure 10 shows a cover with a postal marking instructing the sender to state the country of destination in English. That would be a perfectly legitimate request, except that the address is clearly typewritten and says "Norfolk Island SOUTH PACIFIC OCEAN."

What language is that: Swahili?

When my nieces and nephews were little, I used stamps to illustrate funny stories about their lives and their interests.

doesn't seem to have transpired.

Nevertheless, I had a lot of fun making up the stories and finding the right stamps to use as illustrations.

Drawing on that experience, let me complete this little story about funny stamps using an appropriate Finnish stamp, shown in Figure 11, to say, "The End." Twice.