Save the whole sheet or collect the pieces

Figure 3. Position pieces from the press sheet. At left, horizontal and vertical pairs (top) and the horizontal block of eight with vertical gutter (bottom). In the center, the vertical block of 10 with horizontal gutter. At right, the cross-gutter block of 20 stamps. Click on image to enlarge. 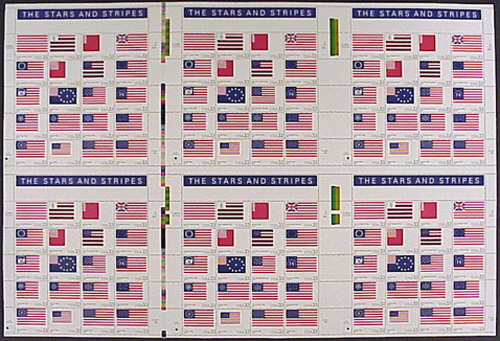 Figure 1. The 33¢ Stars and Stripes stamps issued June 14 are sold in individual panes of 20 at the post office, but uncut press sheets of six panes like this can be ordered by mail. Click on image to enlarge.
Previous
Next

The United States Postal Service began selling a few of its new commemorative stamps as uncut press sheets in 1994. The program caught the interest of many U.S. collectors, but just as many have asked, "What am I supposed to do with these things?" Uncut press sheets, after all, are large and more than a little unwieldy.

Stamps today are almost always printed as large press sheets in continuous rolls, but most of the time no one sees them that way except for the stamp printer. Before the sheets leave the printing plant, they are cut apart into the smaller formats that are sold at the post office.

The press sheet may contain as many as nine of the 20-stamp panes that are sold over the post office counter, so some press sheets measure nearly two feet square.

When the Postal Service decides to make a stamp available for purchase as an uncut press sheet, the printing contractor usually trims away excess margin paper around the outside of the printed stamps, but leaves the individual panes together, unsevered.

Figure 1 shows the uncut press sheet of the 33¢ Stars and Stripes stamps issued June 14. The local post office sells the Stars and Stripes issue only as panes of 20 stamps, but the press sheet, sold through the USPS mail-order division, contains six 20-stamp panes as one large unit.

The Postal Service often sends the press sheets through the mail rolled up in reinforced cardboard tubes, but that's not a good way to store stamps long-term. The uncut sheets are too big to fit into a conventional album, and until recently there just wasn't an established way to store these large items safely and protect them from creases.

A number of collectors, however, prefer to save what are known as "position pieces": pairs and blocks of stamps that, because they contain gutters, clearly show they were removed from a press sheet. The gutter is the uncut margin paper between adjoining panes on the sheet.

Look again at the Figure 1 sheet. It contains two gutters that run from top to bottom. On this issue, some colored boxes are printed within each of these two gutters. The sheet also has one narrow gutter that runs through the middle of the sheet from side to side, just above the printed banner "THE STARS AND STRIPES" on the bottom three panes.

The Scott Specialized Catalogue of United States Stamps and Coverslists the different collectible configurations that can be extracted from the sheet.

The Scott catalog listing for the Stars and Stripes press sheet is shown in Figure 2, as printed in the August issue of Scott Stamp Monthly. The catalog listing identifies the standard pane of 20 as Scott 3403 and assigns minor letters to each of the 20 different flag stamps.

At bottom left in Figure 3 is the horizontal block of eight with gutter. Notice that it contains the bottom row of stamps from one pane, the gutter, the printed banner "THE STARS AND STRIPES" from the top of the pane below it, and the top row of stamps from that lower pane.

At right in Figure 3 is the cross-gutter block of 20 stamps. Notice that block contains parts of both the vertical and horizontal gutters, intersecting to make a cross, and 20 different stamps from four adjoining panes.

Extracting all of these pieces from the press sheet takes a little advance planning. In some cases, it also takes more than one press sheet. That's true with the Stars and Stripes issue: if you look at the Figure 1 photo and consider the various blocks in Figure 3, you'll see that to gather them all you need to take apart two press sheets, not just one.

A steel straight-edge ruler and a razor knife are handy to separate the pieces. Of course, you have to be very careful when using the razor knife and its extra-sharp blade, and children should not handle it at all.

Don't use the knife through perforations though. Once you've cut through the unperforated areas, fold the sheet as shown at right in Figure 4. You may wish to wear light cotton or powder-free rubber gloves while handling the stamps to avoid getting fingerprints on the stamps or gum.

Once again, if you're going to divide up your press sheet, look at the catalog listings first and plan your strategy carefully. Press sheets are manufactured in several different formats, and sometimes only one sheet is needed to create the position pieces — if you're careful.

The position pieces are small enough to fit on standard album pages. Figure 5 shows a sample page from Scott Publishing Co. for a cross-gutter block from the 1998 Four Centuries of American Art issue.

When you're done creating your position pieces, you'll find that from the remains of the press sheet you can make extra vertical or horizontal pairs with gutters between. These are often good items to trade with other collectors, or they can be used to create first-day covers with a little extra appeal.

They also can be used for postage on mail to other collectors or to friends who will return the unusual covers to you for your collection.