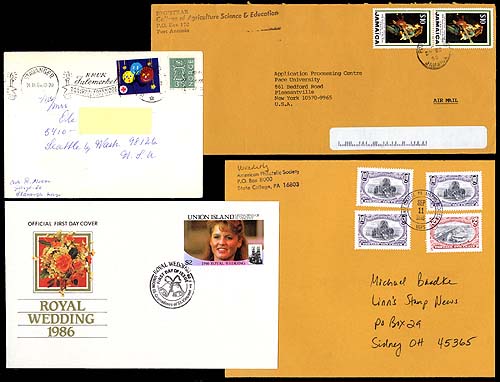 Figure 2. Stamped and postmarked envelopes such as the ones shown here are referred to as "covers." The same word can describe postal cards or parcel wrappers that were sent through the mail. At top are two covers that don't appear to be collector-prepared: they are known as commercial covers. The two envelopes at bottom are philatelic covers created for collecting. Click on image to enlarge.

Figure 1. Little panes spring from big sheets: the pane of 15 stamps at top was cut from a press sheet of 60, as shown at bottom. Many panes of 20 stamps come from sheets of 120. Click on image to enlarge.
Previous
Next

One part of learning about the stamp hobby is learning some of the language. Many stamp-hobby terms have specialized meanings, but it isn't necessary for you to know them all to enjoy collecting stamps.

There are, however, a number of words used regularly by stamp collectors. Some of these words seem very simple, but they can be misleading.

Do you know what a sheet of stamps is? Are you sure? If you go into the post office and ask for a sheet of stamps, what the postal clerk gives you isn't likely to be a sheet. Instead, he's going to sell you a pane of stamps.

The word "pane" specifically means a section of a sheet. The fact is, postage stamps are mostly printed in much larger sheets than your postal clerk keeps in his drawer.

Figure 1 shows a pane of the 1960s Celebrate the Century stamps from the United States at top, and the larger sheet of the same issue at bottom. If you go to the post office to buy some of the 1960s Celebrate stamps, you'll get the single pane of 15 stamps shown at top. The full sheet of 60 stamps shown at bottom is only available by mail order from the Stamp Fulfillment Services agency of the United States Postal Service.

Some press sheets are much larger than the Celebrate the Century issue, with as many as 240 stamps. Years ago press sheets of 400 stamps were quite common. Each large sheet would be divided into four panes of 100 stamps.

Most U.S. stamp issues cannot be purchased as full sheets. Instead, the stamp printer divides all the sheets into individual panes and ships them to the Postal Service for sale in post offices. Only a few special stamp issues have some full sheets reserved for collector sales.

There are different kinds of panes, too, including the small pages you may find in a stamp booklet. For example, the booklet of U.S. Navy Submarines stamps issued March 27 includes two small panes that each include only five different stamps.

Those very small panes are also printed in large press sheets. These sheets of 90 stamps are divided into 18 individual panes that are inserted into the booklets. The uncut press sheets of printed U.S. Navy Submarines panes are not available for sale to collectors, by the way.

Another term that frequently puzzles newer collectors is the word "cover." Many different mailed items are described as covers, and there are actually many different kinds of covers.

A cover is the article that is prepared for postal service or carriage. That can be an envelope, a postcard (or prestamped postal card), the wrapping from a parcel, or any similar object. The point is, the cover bears a stamp, a postage meter stamp, or some kind of printed or manuscript inscription to indicate that postage has been paid or is due.

Many collectors save entire covers with the stamp or stamps affixed, rather than soaking off the individual stamps. These collectors enjoy studying the many elements of the cover, including the stamp, the postmark and other markings of interest.

Commercial covers are those prepared specifically to carry the mail from one place to another, with no consideration for later collectibility. When most people pay their telephone bill, for example, they just put any handy stamp on the envelope and send it away. That outer envelope is a commercial cover, but with a common stamp and no interesting markings on it no one may have any interest in collecting it.

The two covers shown at the top of Figure 2 are commercial covers that are a bit more interesting. At left is a small envelope mailed in 1964 from a family in Norway to another in the United States. It includes a common Norwegian stamp, the 35-ore Boatswain's Knot definitive (Norway Scott 422). It also bears some attractive elements, including a Red Cross charity label next to the stamp that is struck with a pictorial machine postmark with a Christmas theme.

The cover at top right in Figure 2 shows an unusual use of Jamaica's 1995 Bob Marley commemorative issue on an envelope mailed from a college in Jamaica to another in Pleasantville, N.Y. For many cover collectors, this second cover is of interest because it appears to show a true commercial use of these stamps rather than the personal exchange demonstrated by the first cover.

The two covers at the bottom of the illustration can be considered philatelic or souvenir covers. They appear to be intentionally prepared to appeal to a stamp collector. They certainly are collectible items, but some collectors distinguish between covers prepared for collectors for later saving, and those prepared just to carry the mail.

Figure 2, lower left, shows a first-day cover from St. Vincent's Union Island commemorating the 1986 wedding of Sarah Ferguson and Britain's Prince Andrew. Obviously each element of the cover is carefully planned to appeal to collectors, including the cachet (a decorative design on the envelope) and the pictorial first-day cancel on the Royal Wedding stamp.

Notice that the cover is not addressed. Most first-day-cover collectors prefer their modern covers to be unaddressed. Although it is stamped and postmarked, the cover was never dropped into a mailbox for postal delivery. Legions of collectors love first-day covers, and this type of item appeals directly to them.

Finally, a very different philatelic cover appears at the bottom right in Figure 2. Although it carried commercial mail from one organization to another, this cover was obviously created with the intention that a collector would save it.

Four carefully placed Trans-Mississippi stamps from the 1998 issue pay the 32¢ U.S. letter rate in effect at the time. The placement of the stamps allows for a single postmark to lightly mark each of the four.

The sender of this 1998 cover was employed by the country's largest stamp collector organization, the American Philatelic Society, and it is addressed to Linn's Stamp News, the largest stamp-publishing organization. Some collectors wouldn't want to save the cover sent from the APS to Linn's because it clearly is philatelic in nature. Other collectors would consider it to be a great use of some unusual stamps to pay a very common postage rate.

Each cover collector may enjoy something different, which is part of what makes it possible for so many different people to enjoy the cover-collecting facet of the hobby. It's even easier to understand it all when you know the terms collectors use.