Souvenir sheets celebrate events - or not 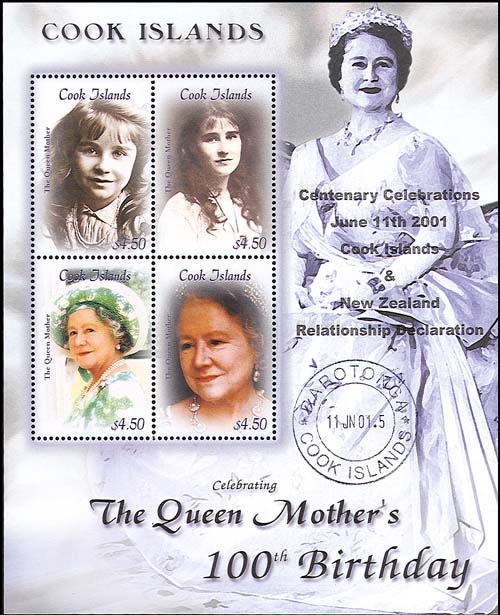 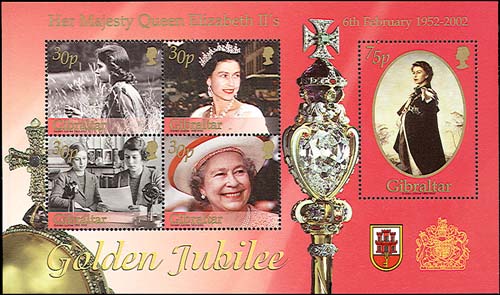 The souvenir sheet shown here was issued for the 50th anniversary of the reign of Queen Elizabeth II as part of an omnibus issue printed by the House of Questa. 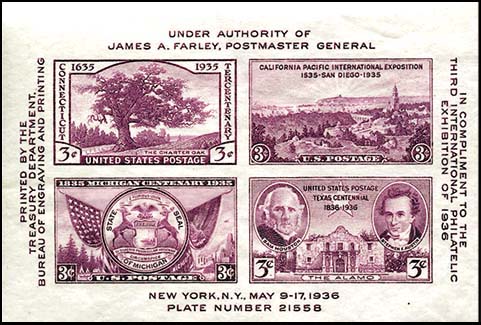 The basic format of printing earlier stamp designs as imperforate souvenir sheets was used on this pane for the Tipex show and was repeated for later stamp exhibitions. 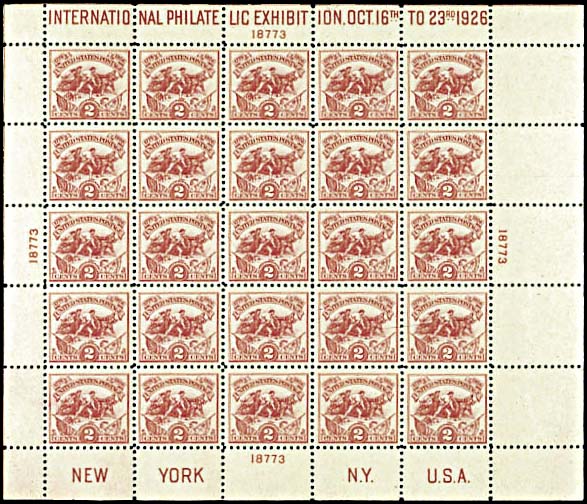 The first U.S. souvenir sheet was issued for the International Philatelic Exhibition held in New York in 1926. 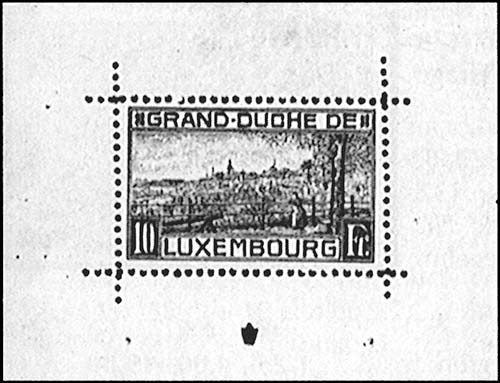 The Prifix catalog calls this single-stamp pane, issued by Luxembourg in 1923 to celebrate the birth of Princess Elisabeth, the world's first souvenir sheet.
Previous
Next

What defines a souvenir sheet?

Others see a souvenir sheet as any small pane of stamps with decorative selvage.Some collectors interpret it strictly to mean a pane of stamps, usually smaller than a regular pane, with text in the selvage to celebrate a particular event such as a stamp show.

Many collectors avoid saying "souvenir sheet" altogether, preferring instead "miniature sheet" or "sheetlet" (a word Linn's does not use).

The United States has issued relatively few souvenir sheets in its history.

Some of these panes celebrate a particular event. Some are purely topical in nature, picturing animals, flowers, cars, cartoon characters, famous people (who often have no historical connection to the issuing country) and other such images.

A souvenir sheet can contain only a single stamp or a set of stamps.

The stamps may be perforate or imperforate, and the stamp designs may also appear in other formats.

What makes a traditional souvenir sheet, other than being issued by a functioning postal authority, is up to the individual collector.

Even the question of what is the world's first souvenir sheet is unsettled.

In 1923, Luxembourg issued a small pane that included a single stamp and wide margins with no text. The pane was issued specifically to celebrate the birth of Princess Elisabeth.

In the Prifix Luxembourg catalog, a specialized catalog published in Luxembourg, the Princess Elisabeth sheet is described in German as "der erste Block der Welt." In German, "Block" means "souvenir sheet," so the description translates as "the first souvenir sheet in the world."

This single-stamp pane is shown in Figure 1.

However, this was not Luxembourg's first stamp issue celebrating a royal event.

Luxembourg had issued a small pane of five stamps just two years earlier to celebrate the birth of Prince Jean, the first son of the Grand Duchess Charlotte. These stamps, picturing the grand duchess, were also issued in panes of 25. The pane of five stamps is listed in the Scott catalog as No. 125a.

Even earlier, in 1906, Luxembourg issued a pane of 10 stamps for the accession of Grand Duke William IV to the throne.

Scott calls this pane of 10¢ scarlet stamps (Scott 82a) a souvenir sheet. The stamps picture the grand duke.

In 1926, the United States issued a 2¢ stamp for the sesquicentennial of the 1776 Battle of White Plains, N.Y.

The stamp was printed using two different printing plate arrangements. A standard pane of 100 (from divided sheets of 400 stamps) was sold to the general public at post offices.

Panes of 25 of the Battle of White Plains stamps were also printed. These had wide margins with the inscription "International Philatelic Exhibition, Oct. 16th to 23rd 1926," printed across the top of the pane and "New York N.Y. U.S.A." printed across the bottom.

This souvenir sheet, which is shown in Figure 2, was sold only at the stamp show indicated in the inscription and through the U.S. Post Office Department's philatelic agency.

Souvenir sheets are often issued to celebrate major stamp shows, as all of the early U.S. souvenir sheets were, which makes these issues all the more popular with stamp collectors.

The U.S. souvenir sheet issued for the Third International Philatelic Exhibition, or Tipex, is shown in Figure 3.

This smaller souvenir sheet contains imperforate versions of four stamps that had been issued previously: the 3¢ Connecticut Tercentenary (300th anniversary), the 3¢ California-Pacific Exposition, the 3¢ Michigan Centenary and the 3¢ Texas Centennial.

Stamp shows have not been the only events prompting the United States to issue souvenir sheets, however.

The 500th anniversary of the 1492 voyage of Christopher Columbus was honored by a set of five souvenir sheets issued by the United States in 1992.

In 1997, the Mars Pathfinder souvenir sheet was issued picturing the Mars Rover Sojourner.

By some definitions, the U.S. Celebrate the Century panes of 1998-2000 might be considered souvenir sheets.

Even the pane of nine stamps for the centennial of the 1898 Trans-Mississippi stamps could be called a souvenir sheet.

Outside the United States, royal events are probably the most popular subjects for souvenir sheets.

The vast geography of the British Commonwealth has led to numerous souvenir sheets being issued by many countries. They commemorate many significant events in the history of the British royal family.

Most recently, the 50th anniversary of the accession of Queen Elizabeth II and the 100th birthday — and the subsequent death — of the queen mother occasioned the issuing of scores of souvenir sheets from every part of the globe.

Shown in Figure 4 is a pane issued by Gibraltar celebrating the queen's golden jubilee year. The Gibraltar souvenir sheet was part of an issue of similar panes printed by the House of Questa, called an omnibus issue.

Souvenir sheets for the jubilee were issued by such diverse nations as Antigua and Barbuda, The Gambia, Dominica, Grenada, Liberia, Micronesia, Niuafo'ou, Swaziland and Tristan da Cunha, along with many others.

Easily as many nations issued souvenir sheets celebrating the 100th birthday of Queen Elizabeth the Queen Mother, and some were also issued for her 101st birthday.

The practice of overprinting souvenir sheets for different occasions is not unusual. Collecting this type of souvenir sheet could even be a specialty of its own.

Other examples include Australia's 12th Commonwealth Games souvenir sheet of 1982, which can be found overprinted for National Stamp Week and the 1954 Central African Viking Mars souvenir sheets overprinted and issued in 1979 for the 10th anniversary of the Apollo 11 moon landing.