Space-fillers fill in when the budget is tight 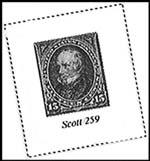 The empty spaces on a stamp album page can be a frustrating sight.

We'd all love to have collections filled with nothing but perfect stamps, but for most collectors that goal is quite unrealistic.

Even trying to obtain a number of less expensive stamps can add up to a pretty hefty total very quickly.Many stamps cost hundreds or even thousands of dollars in superb condition. A collector on a budget can't afford to buy an endless selection of these scarce stamps at auction or from a retail stamp dealer.

Many United States stamps, for instance, retail for more than a couple of dollars. Buying one or two may not be a problem but accumulating dozens and dozens of them can be quite costly.

So what happens? In the album space where you would like to see a nice stamp properly mounted, you instead have an empty space on the page staring back at you (Figure 1).

As you add up the cost of filling all those spaces with stamps in very fine condition, the hobby you began for fun may start looking like a liability that you cannot afford to pursue.

Yes, we'd all prefer perfection, but sometimes it's simply more practical to settle for second-best.

It's always a good idea to remember that completing a collection is not nearly as important as enjoying it. Try not to lose sight of the fact that you can't own every stamp ever issued, and that's no reason to get discouraged.

If you have spaces you really want to fill, but a wallet that won't accommodate catalog prices, there are alternatives.

In his engaging book Franklin D. Roosevelt: the Stamp-Collecting President(published by Linn's Stamp News), Brian C. Baur writes, "After FDR's death, many people were surprised to learn that intertwined among the gems of FDR's collections were many stamps that could be referred to as seconds. Poorly centered, badly perforated, thin, creased and heavily canceled stamps all found a home in FDR's collection."

Baur adds that noted stamp writer Ernest A. Kehr commented on this fact, stating "He regarded every stamp in his collection as a source of information about the country or the peoples by which it had been issued."

This splendid attitude toward stamps allowed Roosevelt to build a number of magnificent collections. Though he could well afford to replace many of his seconds with first-rate copies, he recognized that even a damaged stamp gives a collector the opportunity for study.

A damaged stamp that a collector chooses to save is often referred to as a "space-filler." The stamp fills the empty space on the album page, presumably until a superior example of the same stamp can be obtained.

Space-fillers come from all kinds of sources: old inherited stamp collections, auction lots, trades with other collectors, discount purchases from dealers, and so on.

The stamps can suffer from any of a wide variety of problems: some minor, some very serious.

Because of damage or defect, a space-filler does not have anywhere near the value as the same stamp in very fine condition.

Values listed in the Scott Standard Postage Stamp Catalogue, for example, are retail values that a collector can expect to pay "for a stamp in the grade of Very Fine, with no faults."

A very fine grade stamp "may be slightly off center on one side, but the design will be well clear of the edge. The stamp will present a nice, balanced appearance."

Stamps of a lesser grade are often substantially cheaper than more perfectly centered examples. The values can fluctuate quite a bit, but a collector might expect to see a stamp grading "fine" in its strictest definition selling for one-quarter to one-third of the price of a stamp strictly graded at very fine.

Stamps suffering minor to moderate physical damage can sell for between 10 percent and 20 percent of catalog value or even less, depending upon the severity of the damage and the scarcity of the stamp itself.

Physical damage to a stamp that is quite rare may result in a less severe reduction in value.

These are just ballpark figures that will vary considerably from stamp to stamp. The final factor determining a stamp's real value is always what the buyer and seller agree upon.

None of the six stamps pictured on this page are rarities, but each would have a value greater than $4 if it met the catalog grading criteria.

In fact, in very fine condition, the six stamps shown would cost the collector about $85.

Instead, these issues can be added to a collection for just a fraction of that amount, keeping an album space filled until the collector can afford a less-bruised copy.

Let's take a look at some of these space-filler characteristics.

The upper-left corner of the stamp is missing, a problem that collectors see fairly frequently on older stamps.

Sometimes the damage occurs when the stamp is cut off the envelope and the scissors come a little too close. More often, though, the corner is bent repeatedly by careless handling. After time and trauma take their toll on the weakened stamp paper, the small triangular corner simply falls off and is lost.

The larger the missing piece, the greater the price reduction the collector should look for.

Pulled or missing perforation teeth. Like many space-fillers, the Clay stamp in Figure 2 has more than just one problem. Perforation teeth are missing near the bottom of the stamp's right edge. Note how the little points that stick out from the edge simply disappear on the right side below the number "15."

Just one absentee perforation on a stamp reduces its value, and that reduction is more severe if more perforations are pulled or worn off the stamp.

Tears. Torn stamp paper runs the gamut from miniscule to massive. In Figure 3 is shown a 10¢ Columbian stamp of 1893, Scott 237, suffering from a 4-millimeter horizontal tear extending from the middle of the right edge to a point just inside the stamp design.

The tear in this case is hard to see and distracts very little from the design, but the collector should still be able to obtain this slightly off-center stamp for less than a dollar, rather than the $8 catalog value for a very fine example.

Creases. Stamps are creased when the stamp paper is folded and paper fibers break, creating a line across the stamp where the fold took place.

The 1873 6¢ Lincoln stamp shown in Figure 4 (Scott 159) has a horizontal crease that extends from edge to edge just below the center of the stamp.

Though it's obviously a damaged stamp, it has a handsome fancy cancel and can be studied and appreciated by a collector who perhaps cannot afford a $15 very fine copy.

Thins. When one or more layers of paper are peeled off the back of a stamp, the paper is thinned and weakened.

A problem with thinned stamps is that they are particularly fragile. Handling the stamp can easily cause the remaining paper to tear. An attempt to hinge the stamp into an album can also cause harm.

Other types of damage. The fragility of the postage stamp makes it susceptible to many kinds of damage, and this is often compounded by collectors who mishandle the stamps or store them improperly.

Scuffs, pinholes, stains, very heavy obliterating cancels and similar problems are just a few of the physical shortcomings a stamp may present. All are factors that will reduce the value of a stamp.

Grade. As mentioned previously, a stamp that grades at less than very fine often can be obtained for a price substantially less than catalog value.

The 50¢ airmail issue of 1937, Scott C22, is shown in Figure 6. The perforations at right on this example cut into the design slightly.

Except for this flaw the stamp is a sound item, but it should sell for quite a bit less than the $5 catalog value.

Figure 7 shows another stamp with a characteristic that reduces the value of many stamps: a natural straight edge created when the stamp sheet was divided into panes.

Although the straight edge variety is actually more scarce, most collectors prefer perforations all around on their sheet stamps. As a result, collectors can usually buy such straight-edge varieties for less than catalog value.

Bacterial damage. One space-filler that should not be added to a collection is the one that suffers from dark spots caused by bacteria in the paper. Organisms that are munching away at the stamp can move on to other stamps in a collection, damaging them as well.

Some chemical solutions specifically designed for this problem claim to kill the bacteria, but collectors must use caution when dealing with bacterial infestation.

Collectors should be aware that most older stamps have a greater value on cover than off, and in such cases the stamp should not be clipped from an envelope to add to an album page.

If you only want the stamp to add to your album page, consider striking a deal with your dealer to trade your cover for a single stamp he may have in stock, plus a little something extra.

Maybe you'll be able to use that "something extra" to save for a replacement for one of your space-fillers some day. In the meantime, enjoy that you can study some classic stamps that you might otherwise not be able to obtain.