Official seals have a role in postal history

Figure 3. U.S. official seals currently in use are self-adhesive labels. Shown is a strip of five, Scott OX36. 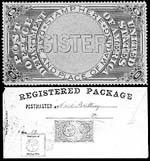 The postage stamp is the most familiar item used by any postal authority, but there are many other labels and forms that play important roles in mail handling.

Official seals, also known as post office seals, are used by post offices around the world. These adhesive seals have played important roles through the years, though they are seen less frequently now than in decades past.For those who collect stamps or study postal history, labels originating from a postal service that appear on covers (mailed items like envelopes, postcards and parcel wrappers) are particularly interesting when they provide information about the processing and handling of mail.

In the United States, the different categories of these seals are organized and listed in the Scott Specialized Catalogue of United States Stamps under the category Post Office Seals. Collectors have documented more than 60 major varieties of labels, including 34 federally issued seals.

An example of this first U.S. official seal is shown at the top of Figure 1. The large green typographed labels were first distributed in 1872.

Below the seal in the illustration is another photo showing how the seal was applied to the envelope-style flap on the back of the registered package.

The 1872 seal was used on two similar registered packages manufactured by two different companies. Three years later the Post Office Department began to use a type of package that did not require an additional seal to provide security, and the use of the green seals for this purpose was discontinued.

Scott OX3 identifies a new label with a new design created in 1877 for a new reason. These engraved issues, printed in chocolate brown, provided the basic design that, with occasional minor changes, appeared on U.S. official seals for 95 years.

The design shows a representation of Liberty within an oval placed in the center of the phrase "officially Sealed." Though difficult to see on the label shown in Figure 2, the background of the 1877 seal consists of the repeated Latin phrase "Post Obitum," which can be translated as "dead mail" or "dead letter."

The 1877 seals were created to be used by dead letter offices when undeliverable mail was opened in an attempt to obtain needed delivery information. The seal was used to close the mailed item and to provide an explanation of why it had been opened.

It is apparent that the seals were also used to close envelopes that were discovered opened in the mailstream. The Figure 2 example, offered in the Sept. 28, 1988, auction of Christie's Robson Lowe, features a copy of Scott OX3 used to seal the flap of an envelope received in New York, N.Y.

John N. Luff, in Postage Stamps of the United States, wrote, "It is said that the words 'post obitum' were placed on the foregoing seal as a joke. Either the joke ceased to be amusing or it was in poor taste. Consequently, a new design was prepared, differing from that of the first seal only in the background, the small letters being replaced by a pattern of loops in cycloidal ruling."

Small design changes continued to occur as the use of the seals expanded into each post office. Official seals were commonly used to reseal damaged envelopes, to prevent the contents from being lost prior to delivery.

Sealed envelopes would often bear a handstamp or written notation indicating that the item was received damaged or was damaged in processing. This is one of the more common uses of the seals over the years.

Many such envelopes have numerous seals applied to close up a torn side to the envelope, with seals folded across the tear so they are partially affixed to both front and back.

For this reason, it should be expected that many examples of official seals on cover are tattered examples that were damaged in transit.

Official seals underwent a substantial design change in 1972, following the Postal Reorganization Act and the launch of the United States Postal Service. The stylized eagle insignia of the renamed agency appeared in the place of the Liberty vignette, or central design.

In 1988 the first self-adhesive U.S. official seals were distributed.

The most recent version of the official seal is shown in Figure 3, a strip of five white labels with black printing and top margin selvage.

Although the seals have no franking power, that is, they do not pay for the delivery of mail, there are similarities between how the official seals are collected and how postage stamps are collected.

The official seals can be saved unused, like the strip shown in Figure 3, or postally used.

Examples on cover should always be preserved intact, not removed from the cover. On-cover examples provide valuable information about where and when the seal was used, and make for much more interesting examples of postal history.

There are also numerous varieties that collectors look for, including color varieties and double printing impressions on the very first seal, to watermarking varieties and perforation errors on later examples.

Information about varieties is included in the Scott specialized catalog. New varieties are often reported by members of the Official Seal Study Group, a society devoted to the study of official seals. Members receive the quarterly journal Officially Sealed Notes, which includes reports on U.S. and foreign seals, new discoveries, varieties and much more.

Official seals are also used by countries around the world, as shown by the four examples in Figure 4 from Japan, China, Mexico and Cuba. Many such foreign examples bear resemblance to the U.S. seals.