Figure 3. Plate blocks of some bicolor high-value stamps, including Scott 523 from 1918, consist of eight stamps, two different numbers and a V-shaped guideline arrow. 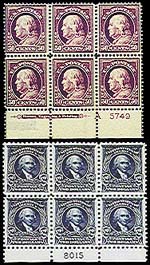 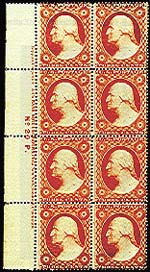 There's something about a plate block that motivates many of us to keep collecting them.

It may be that for some collectors, looking at four or more stamps in a block is simply more interesting than examining a single stamp.

Or maybe we appreciate the plate block format because having a plate number attached to the stamps provides us with additional information about the item we've saved.

Whatever the reason, plate block collecting has persisted for decades. It is likely to continue in some form as long as stamps are bought and sold.

Plate blocks, also known as plate number blocks, are groups of attached stamps in specific quantities taken from the corner or side of a pane, including the selvage (margin paper) bearing the numbers identifying the printing plate or cylinder used to print the entire stamp sheet.

A pane, as you may already know, is a quantity of stamps trimmed from a full press sheet and later delivered to the post office.

Some older press sheets, for example, had 400 stamps printed upon them, but before they left the printing plant they were cut into four 100-stamp panes that were eventually sold through post office windows.

With the exception of some of the earliest issues, United States stamps have plate numbers printed in the selvage of each sheet. In most cases, the plate number appears at least once in the margin of the pane.

All of the blocks illustrated on this page are from the Eliot H. Weisman private collection that was offered for sale May 8 in New York City by Shreves Philatelic Galleries Inc.

The plate number on this block is "No. 20 P.," which can be read in the margin paper attached to the block of eight stamps.

The listing for Scott 26 in the 1999 Scott Specialized Catalog of United States Stamps and Covers, describes the plate block as "P# block of 8, Impt."

"Impt." is an abbreviation for "imprint." Many early plate blocks also included imprinted information that identifies the stamp printer. Along the margin paper of the block in Figure 1, for example, one finds the words, "Toppan, Carpenter & Co. BANK NOTE ENGRAVERS, Phila, New York, Boston & Cincinnati."

The imprint is usually found centered in at least one margin on early U.S. stamp panes.

Why does this plate block require eight stamps when others need only six or four?

For stamps of a single design, such as Scott 26, a plate block consists of two rows of the minimum number of stamps attached to the margin that encompasses all of the plate number and imprint information.

On many U.S. issues the location of the imprint and plate number information can help identify the section of the sheet from which the plate block came.

Therefore, by examining the plate block in Figure 1, it is possible to tell by the position of the plate information that the block came from a left-hand pane.

This method of locating the pane position could not be used for every early issue, however. When rotary-press stamp issues with corner plate blocks were introduced in the 1920s, a similar method developed that was much more consistent.

Plate number imprint blocks in many different styles were created by the companies that produced early U.S. postage stamps.

The Bureau of Engraving and Printing began manufacturing postage stamps in 1894 and used several similar imprints until discontinuing them in December 1911, according to the 1997-1998 Durland Standard Plate Number Catalog.

One of the later plate number imprint blocks is shown at the top of Figure 2. The 50¢ violet Benjamin Franklin stamp of 1912 (Scott 422) includes the Bureau imprint, letter "A" and plate No. 5749 in the margin.

Many issues of the time were printed in sheets of 400 (cut into panes of 100) and the Bureau imprint would appear twice in the sheet margin: once at top or bottom and once at left or right. The pane from the upper-left portion of the sheet, for example, would have numbers in the top and left margins.

Scott 422 was printed in sheets of 200, however, and divided into panes of 100. Plate numbers were found in the top and bottom margins of each pane.

When imprints were eliminated by the Bureau, the plate number remained. Since the numbers still appeared roughly centered in the pane margin, plate blocks of six were the prevalent format, as illustrated by the block of Scott 479, the $2 James Madison issue of 1917 shown at the bottom of Figure 2.

Numerous other formats were also created. Higher value bicolor stamps are particularly interesting. Figure 3 shows a plate block of the $2 orange-red and black Benjamin Franklin issue of 1918, Scott 523. In the Scott U.S. specialized catalog this block is described as "P# block of 8, 2# & arrow."

The illustrated block shows two plate numbers (one for each color used in the printing process) and an orange-red arrow guideline (shaped like a "V") in the center of the margin.

The formats for the known plate blocks are described in both the Scott U.S. specialized catalog and the Durland catalog.

In the next Refresher Course we'll see how the arrival of the rotary press 80 years ago changed the way plate blocks look today.