Why does my stamp have a lot of holes in it?

Figure 4. Other types of holes through stamps may also identify the user, or serve to cancel the stamp. 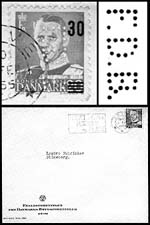 Figure 3. When perfins are kept on intact covers, it is possible to identify the sender and other historical details.

Figure 2. The earliest known perfin on a United States cover was mailed May 26, 1908, by B.F. Cummins Co. of Chicago, Ill., a perforating machine manufacturer. 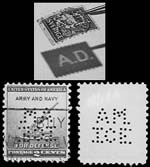 Figure 1. Perfins are stamps with holes punched through the design. The letters identify the purchaser of the stamp.
Previous
Next

Most people know that perforations are the little holes that surround a postage stamp so that it can be easily separated from the other stamps around it.

There also exist stamps that have little holes punched through the vignette — the picture area of the stamp — often in the shape of letters, but sometimes forming a design or geometric pattern.

A less common name for these same stamps is "spifs," with the five letters of the name standing for "Stamps Perforated with Initials of Firms and Societies."

In most cases, the perforations within the stamp design are created by the business or organization that purchased the stamps from the post office. Perfins identify the proper owner of the stamps and act as a security device to discourage theft or improper use.

Perfins are known on stamps from more than 200 countries. Though their use has decreased in recent years, they are still created and used today by many groups.

Two examples of perfins are shown in Figure 1. The initials "A.D." are punched into the face of the Swedish stamp at top. The shadow below the stamp shows the lettering is face-up on the design side of the stamp.

The letters "AM. ICE" on the United States stamp at the bottom of Figure 1 are punched so that they are right-reading on the reverse of the stamp, rather than on the face.

Perfins were first used on postage stamps in England when Joseph Sloper, the developer of a pin perforating machine, obtained permission in 1868 from the General Post Office to perforate initials on postage stamps on behalf of his clients.

At the time, businesses were plagued by thefts of postage stamps from company stocks. Because stamps were easily stolen and resold, dishonest employees found them an attractive target.

With the initials of the proper owner perforated through the design, it became easier to determine if the stamps were improperly used.

For example, the letters "AM. ICE" on the perfin in Figure 1 identify that stamp as belonging to the American Ice Co. of Philadelphia, Pa. The only proper use of this stamp would be on business mail from American Ice Co. Any other use would raise suspicions that the stamp was stolen from the company.

Sloper's idea caught on throughout the British Commonwealth and perfins soon appeared in other European countries as well.

The cover shown in Figure 2 illustrates the earliest-known use of a perfin in the United States. Postmarked May 26, 1908, the envelope was mailed from B.F. Cummins Co. of Chicago, Ill., a perforating machine manufacturer. It bears a 2¢ George Washington and Shield stamp of 1903 with the perfinned initials "BFC CO."

Many collectors discarded perfins over the years because they thought the punched holes damaged the stamp. The perfins that were saved in collections were usually soaked from envelopes and placed in albums or stock books.

This made identifying perfins much more difficult. Once the stamps were removed from the envelope, it became more difficult to identify the perfin pattern.

For example, with just the surcharged 30-ore Danish stamp and perfin pattern shown at the top of Figure 3, a collector might not be able to learn what the initials "F.D.B." stand for.

However, since the stamp is actually still saved on a complete cover (Figure 3, bottom), the collector can see that the sender was Faellesforeningen for Danmarks Brugsforeninger, a cooperative association of Danish supermarkets. Because the postmark appears on the cover, the date and location of mailing are also known (Feb. 16, 1956, from Skive, Denmark).

Obviously it is more useful to have the entire cover rather than the single stamp alone. Many collectors now save perfins on cover to show how the stamp was used.

Collectors who come across perfins that have been removed from covers can often identify the pattern from listings in perfins catalogs. Catalog of United States Perfins,a 547-page book by Joseph and Dorothy Balough and published by the Perfins Club, illustrates patterns for thousands of perfins — most identified by name and location.

More information about the Perfins Club appears in a box on this page.

Catalogs help identify subtle changes in perfin patterns. Even though two patterns may appear nearly identical, slight differences help to pinpoint when an organization changed machines or its perfin pattern.

Catalogs also illustrate the differences between similar perfin patterns used by different companies. The pattern "LL" over "C" in the United States, for example, was used by Lockland Lumber Co. of Lockland, Ohio; and by Lalley Light Corp., of Detroit, Mich. The catalog shows the distinction between the two.

Since the perforated letters are the focus of most perfin collectors, many exhibit their stamps face down, notes Kurt Ottenheimer, president of the Perfins Club. That way the punched-hole pattern is easier to read.

"Thematic collectors may show their stamps face up," he adds.

There are a couple of different ways to collect perfins thematically. One is to relate the pattern of the perfin to the theme of the collection.

Railroads commonly used perfins on stamps that were supplied to various offices. Perfin covers or stamps with the railroad theme, such as "PRR" for the Pennsylvania Railroad, are a natural addition to such a collection.

Collectors of a specific topic might also seek out a perfinned stamp where the vignette design fits the topic, though the perfin may not.

There are also more than 50 perfin patterns in the Catalog of United States Perfins that show a pictorial pattern, such as an anchor, hourglass, horseshoe, lighthouse, spinning wheel, star and so on.

Although the majority of perfins show letters to identify the proper user of the stamp, there are other stamps with holes punched through them that collectors may encounter.

At left in Figure 4 is a 4-peseta Spanish stamp from 1879 with a sizable hole punched through the design. This is a form of cancellation to indicate that the stamp was used for telegraph service.

The center stamp is a privately perforated issue from 1908 with a Schermack control perfin that identifies the user of specific stamp-affixing machinery. The patterns of such stamps are also identified in the Perfins Club catalog.

The stamp at right is a U.S. revenue stamp. On many revenues, perfins were used as a canceling feature, often identifying the user of the stamp as well.

Perfins have also been used for other purposes. Official stamps, intended for use by government agencies, are so designated by some countries through the use of a perfin pattern. Similar examples exist for postage due and specimen stamps.

An interesting use of perfins for decorative purposes was created in 1993 when Netherlands issued its two-stamp December Holiday set. The diamond-shaped stamps were issued with holes punched in a seemingly random pattern that actually repeated for each design: 16 holes for the Candles stamp and 14 holes for the Fireworks stamp.

As reported in Linn's issue of Feb. 28, 1994, the holes created the illusion of snow when the stamps were affixed to white envelopes.

Perfin specialists continue to report new finds and pattern varieties. It is an active field of study that provides challenge and excitement for the collector.