Varieties are the spice of stamp collecting

Figure 4. Two varieties of the 13¢ Eagle and Shield stamp are the major listing (Scott 1596 at left) and the line-perforated minor listing variety (Scott 1596d at right). 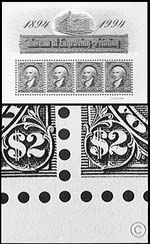 Figure 3. A double transfer evident by the extra line at the bottom of the right-hand stamp on this 1994 issue. 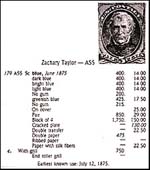 Figure 2. The Scott U.S. specialized catalog entry provides information about other known varieties. The letter "c" near the bottom identifies a variety with a minor listing.

Figure 1. One type of variety shows perforations missing from a normally perforated stamp. Such major errors on U.S. stamps are listed in the Scott U.S. specialized catalog.
Previous
Next

Almost everyone likes a little variety in life, and stamp collectors are no exception. Stamp varieties are a big part of what this hobby is all about, but the kind of variety you look for depends on the kind of collector you are.

That's a good general definition for the many different kinds of stamp varieties that exist.One dictionary definition of the word "variety" is "something differing from others of the same kind."

Errors in stamp production are among the most highly coveted postage stamp varieties. One of the most famous varieties of all time, the Inverted Jenny, is an example of a production error.

When the 1918 United States 24¢ airmail stamp was being printed, one partially printed sheet of stamp paper was accidentally turned the wrong direction before it was fed into the presses. As a result, the airplane known as the Curtiss Jenny is shown flying upside down on that sheet.

This kind of error is called an "invert," meaning one element of the design is upside down in relation to the rest of the stamp.

The term "error" has a specific definition for stamp collectors: It describes a major deviation from the normal stamp. Other kinds of errors include missing colors, wrong ink color, wrong paper, completely missing perforations, or mistakes in watermarks or overprints.

One perforation error is shown in Figure 1. The 6¢ Franklin D. Roosevelt coil stamp of 1968 is supposed to have a vertical row of perforation holes between each stamp. The pair shown in the illustration have no perforations. The stamps are said to be "imperforate."

Errors often have a premium value. Imperforate Roosevelt coils are valued in the 1998 Scott Specialized Catalogue of United States Stamps at $75 for one pair.

A normally perforated pair of the same stamp sells for about 30¢.

For all varieties, the value often depends upon the scarcity of the item and collector demand (meaning, how many collectors want to obtain this specific variety).

The highly prized and rare Inverted Jenny is valued in the catalog at $150,000.

The imperforate Roosevelt coil stamps are listed as Scott 1299b. The normal stamp is Scott 1299.

The Scott U.S. specialized catalog provides descriptions and values for many different kinds of varieties. Some are listed without any letter designation, as shown in Figure 2, the Scott catalog listing for the 5¢ Zachary Taylor stamp of 1875, Scott 179.

Following the initial listing for the standard stamp issue are color varieties, gum varieties, printing varieties and paper varieties. Most have values assigned, but no special Scott catalog number designation.

Near the bottom of the list, however, is the small letter "c" to identify the 5¢ Taylor stamp with grill.

A grill is described in the catalog as small square pyramids in parallel rows, impressed or embossed on the stamp, breaking the paper fibers to allow cancellation ink to soak into the paper.

A specialist in this particular issue might seek out all of these varieties, whether or not an identifying letter has been assigned in the catalog.

The lettered varieties are known as "minor listings." The varieties with no identifying letter are simply known as "other varieties."

Other production varieties that do not qualify as errors are often described as "freaks" or "oddities." Examples are improperly placed perforations (possibly cutting through the design), color misalignment (creating odd color shifts in multicolor issues) and many others.

These less notable production varieties are normally not listed in the Scott catalog, but they are often sought by collectors nonetheless.

A special type of variety known as a "double transfer" appears on numerous stamps with line-engraved designs printed by the intaglio method.

One method of intaglio printing involves impressing an engraved design from a steel die to a transfer roll, and then onto a printing plate.

While the design is being transferred to the plate, the slightest alignment shift can cause a faint doubled impression to appear. When the stamp is printed, this double transfer can be seen on one stamp from the full sheet.

Also, if an image is improperly laid down on the plate during the transfer, it has to be removed by burnishing and transferred again. Sometimes the burnishing is incomplete, and part of the first impression remains visible.

When the Bureau of Engraving and Printing created a pane of four $2 stamps to mark its 100th year of production in 1994, a major double transfer occurred on the far-right stamp on one of the 48 panes that were printed on each press sheet.

The clearest indication of the double transfer is the thin extra line at the very bottom of the design, shown enlarged at bottom right in Figure 3.

Double transfers (and triple transfers, another variety) are usually listed in the Scott catalog.

Multiple transfers are known as "plate varieties," to indicate that the variety occurs in the printing plate rather than as the result of a later production mistake.

Other types of plate varieties that are generally visible on stamps include plate cracks, gouges, scratches and other minor flaws.

Some varieties are caused not by accident or error, but by intent, or by changes in production methods.

Like many definitive stamps, the 13¢ Eagle was returned to production when supplies ran low. While the majority of the stamps were perforated on the Andreotti press (left), a much smaller quantity were processed on the Bureau of Engraving and Printing's line perforator.

The difference can be seen by the way the horizontal and vertical perforations meet perfectly at the corner on the standard variety, Scott 1596 (left), while the holes on the line perforated variety, Scott 1596d (right) do not match up, and run all the way to the edge of the pane.

When stamps are normally issued with phosphorescent tagging to activate canceling machinery, varieties without tagging are usually noted.

Special collecting configurations, such as plate blocks, coil line pairs and booklet panes, are listed as other varieties.

Collectors seek out varieties to present a fuller study of any given stamp in their collection. While the standard issue tells part of the story of the stamp, the varieties provide a glimpse of how the production of the stamp can influence the final product.

For the specialized collector, these varieties may provide the basis for an extended collection or a prize-winning display or exhibit.