Stamp subjects are approved by committee 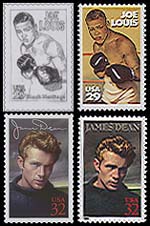 Figure 1. When the 29¢ Elvis Presley stamp was proposed, individuals were encouraged to vote in early 1992 for one of two designs showing the popular rock 'n' roll performer.
Previous
Next

There is a notable difference between a postcard and a postal card, however, and understanding that difference will help the collector understand an important part of the stamp hobby.

A postcard requires the sender to add postage before mailing the card. An example is the colorful picture postcard sold at souvenir shops for vacationers to mail home.

After greetings are written and the card is addressed, a stamp must be affixed before the card is mailed.

Figure 1 shows an example of a postcard mailed from Faeroe Islands to the United States in 1987. The mailer affixed a 3-krone postage stamp showing a fishing trawler (Scott 158) to pay the necessary postage.

A postal card, on the other hand, has postage imprinted upon the card by the postal authority before the card is sold. Such cards are normally sold at post offices.

Figure 2 shows a postal card mailed in 1997 from Indiana to Ohio. The 20¢ stamp image on the card, showing St. John's College, is part of the card's printed design.

This type of postal card has no picture on the reverse. Instead, the reverse is blank, allowing a large area for the mailer to place his message.

Both the postal card and the postcard play important roles in the stamp hobby. Collectors may save postally used versions of both to show evidence of existing postal rates, the use of specific stamps, postmark varieties, and so on.

Mint postal cards are also saved by some collectors, just as mint postage stamps are saved by others.

Unused postcards, however, do not have a role in the stamp hobby. A separate hobby, known as deltiology, includes collectors of both mint and used postcards. These collectors are generally interested in the design, subject matter, history or manufacture of the postcard itself, rather than its postal use.

A special reduced rate for postcards was authorized by an Act of Congress in 1898.

Some recent U.S. postal cards resemble postcards and, in fact, are sometimes referred to as "picture postal cards."

One example is shown in Figure 3 from the 1996 Endangered Species picture postal card set.

Although the current postage rate is 20¢ for postcards and postal cards, the Postal Service sells its Endangered Species postal cards for $11.95 for the set, which figures out to about 80¢ for each card.

First-class postage rates for postcards and postal cards have increased over the years much in the same way that first-class letter rates have.

These size requirements are described in the USPS Domestic Mail Manual dated Jan. 1, 1998. The DMM compiles many of the mailing regulations followed by the Postal Service.

Cards that exceed the maximum guidelines must pay the standard first-class letter rate of postage and, according to the DMM, must not bear the word "postcard."

A commercially produced picture postcard that violates the Postal Service regulations is shown in Figure 4. It measures 3.82 inches high, which is within the guidelines, but is 8.875 inches long, nearly three inches beyond the acceptable maximum length.

It was mailed with a 20¢ stamp, but received a postage due marking (at left) indicating that because of its excessive size, an additional 12¢ payment was needed to fulfill the first-class letter rate of 1 ounce or less.

Along with the standard 20¢ postcard rate, there is also a reduced first-class rate for mailers who send out a large quantity of cards that are presorted to meet USPS automation requirements.

A postal card does not exist to fulfill this reduced rate, so mailers who take advantage of it usually mark their postcards with a permit statement in the upper-right corner where a stamp is normally found.

Some mailers, however, use special first-class presorted postcard postage stamps that are available from the Postal Service.

Only one postage stamp, the nondenominated Auto Tail Fin coil stamp, currently fulfills this postage rate. The stamp is manufactured in three varieties, including a self-adhesive version (Scott 2910) that is shown on the postally used commercial postcard in Figure 5.

Although the stamp may be used in combination with other stamps to pay postage for other types of mail, a commercial postcard like the Figure 5 example properly shows the intended use of the Auto Tail Fin coil stamp.

The stamp has a nominal value of 15¢, but it is used to fulfill postage rates ranging from 14¢ to 18¢ per piece, depending on the degree to which the mailed postcards meet Postal Service automation requirements.

For standard first-class postcards, there are several available stamps, including the 20¢ Blue Jay design seen on the Figure 4 example, a 20¢ Cog Railway stamp from the Transportation coil series, and a 20¢ Harry S. Truman stamp from the Great Americans definitive series.

A number of different postal card designs are currently available from the Postal Service as well. A new 20¢ postal card honoring the University of Mississippi is expected soon.

A postcard/postal card collection may begin with postally used examples from each postcard rate, and can expand to show different stamps and postal cards used to fulfill each rate. As always, it's up to the collector to decide which way the collecting will take him.