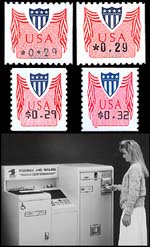 Figure 3. The first computer-vended coil stamps from the United States were issued in 1992 (top left). Later varieties appeared in following years. Some of the stamps were vended by a machine similar to the one shown at bottom.

Figure 2. Vended postage stamps from other countries often include a computer-printed denomination. Shown are two varieties that have been issued by Denmark.

Figure 1. This Autopost postage stamp was printed by computer at the time it was purchased from a machine.
Previous
Next

In the summer of 1989, the United States Postal Service unveiled a public-access computer system called Autopost that would allow customers to weigh mail, look up postage rates and print a postage stamp.

An example of the Autopost stamp is shown in Figure 1.The self-adhesive black, white and orange sticker that came out of the machine more closely resembled a newfangled postage meter stamp than it did the solemn $1 blue Johns Hopkins postage stamp that had been issued a couple of months earlier.

The Autopost machine was part of a test program that lasted about nine months. Public-access machines were located in Washington, D.C.

Although the date of purchase and location of the machine were printed upon each Autopost stamp, the stamps could be used at any time (and are, in fact, still valid for postage today).

It was the first time that computer-printed postage was made available in the United States, but the Autopost machine had a few important ancestors.

Mailomat was a type of public-access postage meter, where customers could pay for a postage imprint at a coin-operated station. Letters franked with a Mailomat postage imprint had to be mailed at the site where the postage was purchased.

Mailomat machines were first put into use Oct. 14, 1936. The last machine, in the lobby of Pitney Bowes personnel office in Stamford, Conn., was still in operation in the early 1980s.

Modern machines that print and vend postage stamps began appearing in Europe more than 20 years ago, long before the first Autopost machine was unveiled in Washington.

In 1976, the postal authority in Switzerland began installing machines that would print and dispense postage labels with values of the customer's choice, ranging from 0.05 francs to 99.95fr.

The German name for this type of postage, "Automatenmarken," has been abbreviated as "ATM" among some collectors.

Those initials can be confusing, however. In English, "ATM" most frequently stands for "automatic teller machine," and the initials have been used to describe U.S. self-adhesive stamps specially designed to be dispensed from these bank transaction machines.

Such stamp issues also are referred to as variable-denomination stamps because the mailer can select the denomination that will appear on the stamp.

Like the Autopost stamps, these issues begin as labels that are blank except for a security pattern or other design.

The value is printed on the paper at the time of purchase.

Figure 2 shows two varieties of Frama stamps that have been used by Denmark. The top photo shows, at the right, a plain machine stamp (text only) on security paper, first issued in 1990.

In this example, the machine stamp was applied along with a traditional postage stamp (left) to pay for delivery of a parcel from Denmark to Germany.

The second stamp, shown at the bottom of Figure 2, is one of three very similar Frama stamp varieties that were issued by Denmark early in 1995. These more colorful stamps show how vended postage stamps are evolving.

Collectors look for varieties among the stamps, including counting numbers on the back of every fifth German stamp. Germany's vended stamps come from a Klussendorf machine.

In 1992 the U.S. Postal Service began testing vending machines for a new computer-printed stamp in 15 locations around the country.

Like the earlier Autopost machines, the new Eca-Gard machines weighed mail and provided rate information. Customers could also purchase stamps of any denomination from 1¢ to $99.99.

The lowest denomination available was later changed to the first-class postcard rate of 19¢ (which was upped to 20¢ in 1995).

The coil stamps dispensed by the machine featured a denomination in simple black type printed on a blank stamp with an engraved wavy-line background. A blue-and-white shield at the top of the stamp had red-and-white bunting on either side draping along the vertical sides of the stamp.

Tiny plate numbers appeared along the bottom edge of every 48th stamp, similar to the numbers printed on standard U.S. coils since 1981.

An example of the first Eca-Gard coil stamp is shown at top left in Figure 3.

One version of the machine that dispenses the stamps is shown at the bottom of Figure 3.

Similar stamps have been issued by other countries, including the coil stamp from the Japanese Nature series shown in Figure 4. Known as an "automatic stamp," the example is one of two designs that were issued April 10, 1997.

Foreign vended stamps printed at the time they are vended are frequently listed in specialized catalogs for the appropriate country. The Danish labels in Figure 2, for example, are described in the AFA Danmark Frimaerkekatalog and the Facit Special catalog.

Collectors can choose to save mint or postally used copies of any variable-denomination stamps.

Coil stamp collectors often save strips of five of the U.S. stamp, with the center stamp bearing a plate number.

Because some of these stamps are created by a limited number of machines, used copies found on cover may be hard to come by.

Covers bearing these types of stamps should be saved intact, to show how the stamp was properly used to deliver mail.